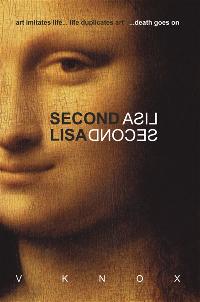 In Second Lisa, the author often mentions synchronicity. What could be a greater example of this than a book written about a second Mona Lisa at the same time as an almost identical work, the Isleworth Mona Lisa, is found?

The original was painted about 1504 and the second portrait – deemed another authentic work of Renaissance artist Leonardo da Vinci – is dated some 14 years later. It is as if a greater power conspired to bring together two elements in time representing more than mere coincidence.

Ironically, Knox’s book is also a synchronic work in that it focuses on the events of a particular time with special emphasis on linguistics – the scientific study of human language. And boy, can this author flex her linguistic ingenuity, not only as she dishes up jaw-dropping prolificacy while contemplating the lives of Leonardo and his sister Lisabetta Buti in the 16th century but also as she unveils the linguistic confines and of Veronica Lyon’s autistic son, Jupiter, circa 2004.

Lisabetta claims to be the authentic Mona Lisa rather than the historically accepted Lisa del Giocondo. The author says her fictional work is based on an “obscure census,” which reveals that da Vinci actually did have a half-sister named Lisabetta. “I decided she deserved a more full life for her memory’s sake and that of the millions of anonymous women behind great geniuses.”

Lisabetta did not even make it into the musty back pages of history books. As the person who loved her eccentric brother more than anyone and guided the business of his artistic career, she expected to garner at least some recognition.

“Being ignored burns like acid, but the truth can expose the unfairness of history and remedy its indignities. Psychic varnish can leach off my skin… I want to have my real name whispered on Earth in the sanctuary of galleries and be written into the credits of Leonardo’s life story.”

Although this never happened, Lisabetta’s devotion toward Leonardo keeps her drawn to him and to her portrait even after death. It is more than telling when she states: “A good artist copies a likeness of his subject, but a master artist captures their soul.”

And so it was. “I remained beside Leonardo in spirit form to honor our extraordinary bond,” she notes. Lisabetta adds that the throngs of people who visit the Louvre in Paris each day to view the famous painting do not realize that she is the woman inside the frame. As she peers out from it, she knows she is destined to remain earthbound until she can “put things right.”

To that end, Lisabetta conspires to seek the help of the living – the unsuspecting young Veronica Lyons and her challenged but psychically open son. “I had a score to settle with fate and yes, I wanted to wipe the smile off Lisa del Giocondo’s face... wherever or whenever she was.”

Second Lisa is actually a three-book series. Book 1 gives the reader a view inside the lives of Leonardo, Lisabetta and Veronica from birth to adulthood. Although it focuses on these primary characters, a host of family members are brought into the mix resulting in a fully fleshed out and intricate story that covers everything from the mistreatment of women throughout history to loves forever lost.

The author also offers a profound exposé of Veronica’s struggle raising her son while dealing with a phantom woman who whispers in her ear. “The house is electric,” she notes. “It’s been that way for days. The scent of violets lingers in every room.”

Of Jupiter she writes: “I am in awe of Jupe’s logic: after we say goodnight, he asks me to turn on the dark rather than turn off the light. I love that kid’s mind.” The reader learns how Jupiter interprets his world down to such minute particulars as the acceptable shape of his sandwiches and how many items can be set on his dinner plate at one time.

Then one day, Jupiter tells his mother, “She wants to talk.” “Who?” Veronica asks. “The happy lady,” he replies and points to a wicker armchair. “Her.”

The author exhibits a propensity to explore, analyze, scrutinize, inspect and dissect every character and event in  comprehensive detail. These intensive observations invoke to some vexation as the reader hopes the story would simply rise up and move along. There is little need to know how a cat catches a bird, to be offered a protracted exegesis of the sights and sounds of a library or an in depth explanation on the design of her teacup?

While each one is presented with the author’s incredible creative flair – and there is no denying that Knox is a supremely prolific writer - adding so many secondary elements tends to stray from the natural flow of the overall story. And it takes until Part 6 – some 350 pages in – before  the real meat of the story unfolds and we learn of vital family secrets, true motivations and the pretext behind Veronica’s banishment to the opposite side of Canada, originally eluded to on Page 94.

In spite of these things, the author succeeds in bouncing back and forth in time with ease. However, be forewarned: this book demands much more than mindless reading. It is a multifaceted story with so many intricately intertwined elements that it requires a degree of diligence and dedication but the reward will become obvious as you realize the immense capacity of this novice author to captivate you beyond measure.

Very few writers can encapsulate a moment in a bubble with such panache as V. Knox: “The water was strong midnight rain, which pulled me into sensual memories. I heard it pelt the windows and the roof, and I squinted through it as it cried down the glass.”

Note: Do not expect to glean everything from Book 1. As part of a trilogy, it leaves the most monumental question still dangling: what does Lisabetta want Veronica to do to set things right for her – to establish her as the real Mona Lisa? Readers can purchase either a condensed version of Second Lisa that includes the entire story or they can pick up Books 2 and 3 to find out.

To get your copy of Second Lisa, Book 1, go to: http://www.amazon.com/Second-Lisa-imitates-life-duplicates/dp/09877...

For a copy of the full version, go to: http://www.amazon.com/Second-Lisa-imitates-duplicates-death/dp/1478...

Article on the Isleworth Mona Lisa - believed to be a younger version of the Louvre painting created 14 years later: http://newsfeed.time.com/2013/02/18/second-mona-lisa-deemed-authentic