I've started uploading youtube videos and was wondering if any of you has some experience in using that for promotion.

my latest book will be launched on Nov 11. www.fallinginlovewithyourlife.com and I have a couple of videos posted there.

Your comments, what you like, what needs to be changed, what has worked or not, will be very much appreciated.

all the best,
alicia

Permalink Reply by Peter N. Jones on November 16, 2008 at 9:55am
I've been using book videos/trailers to promote my books. I can't give you specifics on success since there is no way to track the click through from a video to the purchase of your books. However, I think they are great and well worth the effort. Just remember, don't limit yourself to YouTube. I use TubeMogul as it uploads videos to many sites simultaneously - Google, Myspace, YouTube, etc.

First, let me say CONGRATULATIONS on your new book! The video looks great and I really like your choice of music.

Video book trailers are a great way to promote books. I to would recommend you look at several different video sites for posting. However, it is my experience with Internet Marketing that the key is to target the right sites and keywords that will reach your target market for your book.

You can track the number of views for your video, and if you have a link within the video that will take them to your site for purchase then you can look at your website analytic's to see who has used that link to view the site.

Based on those numbers and the number of purchase you can come up with an estimated number of sales from your video.

I would be happy to speak with you more to see if I can assist you with the marketing of your new book.

Permalink Reply by Linton Robinson on November 18, 2008 at 5:28pm
Hi Alicia
Nice video. It's long, though. Generally, unless you have a "story line' of some element of interest other than the book itself, it's considered best to keep them around two minutes of under.

It's good you are questioning how to use the vids, though. Many just stick them up on YouTube and think they did something.

Lesson one in utilizing videos is EMBED. You could have embedded that video on this page for viewing right here, rather than linking away from the site. Any site that accepts HTML like ning is a laydown for vid promo.
Forums that don't, that use bbc code, I usually link to an image that clicks to the video page.
Like this one:

This is also useful if YouTube gives you a "blah" icon, as they often do. The "clickability" factor is much higher on this, and it tends to be seen as offering something, not requestion something, if you get my drift.

You can also put your vid up on Megatube, Yahoo and Google videos, etc. All offer the same advantage of YouTube, but to a lesser extent: you can associate your vid with others. Search around for videos like your own and "Video Respond" to them. This ends up hanging your vid in places where people most likely to be interested will see it.

One feature of a video is what I call the "second tour". You make the rounds of websites saying 'Hey, my new book", then cruise again a couple of weeks later with "hey, here's my cool video".

So far this hasn't worked out all that well for the first book I am doing it with, but I think it will have some secondary payoffs soon. Ironically, it's working best for somebody else's book that I did a video for. But she has a following, and one very MySpace/YouTube oriented.

Look, I have a manual out on making videos. I realize you have already made one, but you might find it helpful in the future, especially in breaking up the "slideshow with superimposed script syndrome" that people have gotten overly used to. It also has a section on promotion. You can see some of my promo and poetry vids on my site: http://linrobinson.com and the manual's page at http://adoroworks.com

Good luck to you

Permalink Reply by Linton Robinson on November 19, 2008 at 6:54pm
The current issue of Poets & Writers also has a very good article regarding book trailers.
Read it here.

There's also a page with book trailers that were successful at marketing their books.
View the trailers here.

Permalink Reply by Linton Robinson on December 9, 2008 at 10:26am
Well, I have to say those secondary payoffs are happening: 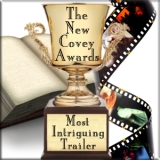 Thanks to support and votes from you, I was just awarded a Covey, one of the few and best known awards for book videos, for IMAGINARY LINES.

I got 46% of the votes out of a field of 20, so you can tell your support really did some good.

If you haven't seen the video, I'd suggest you take a look on the Covey awards page, if for no other reason than to see some beautiful artwork by Victor Cauduro, one of Mexico's finest living artists.

IMAGINARY LINES is available on amazon.com, and at discount on theAdoro Books site.

(One cool thing about this: it makes a nice endorsement for my eBook on making book promo videos for free, available HERE.


Thanks once again, folks!
Lin

Permalink Reply by Yolanda Jackson on December 6, 2008 at 9:03pm
youtube shows the amout of views to your video but if want a lot of views you will have to pay big bucks

I've never been interested in the book trailer idea for myself. There's just too many authors doing it and too many of them saying they don't feel it works. Most of them say they either don't know if it's helped them or that they felt it hasn't. It's no different from other things I guess but will anyone watch the video without the authors having to send them their themselves? That's the question. If it's not getting random views then to me, it's not worth it, LOL! It depends on the author and what they want to do. If they want to try it then that's great but some like me do not. I don't really pay them much attention to book trailers myself, LOL. Look if I can do it for free, I probably would experiment. But I am not gonna pay someone big bucks to do a trailer for me and I am not guaranteed at least one sale from it. I'm sorry. For me to pay for a service, I gotta know it works and will result in some sales. Good luck with yours and best wishes!

Here's one example of using a book trailer. I was recently contacted by a marketing firm that represented a author. The author has published numerous books, has numerous best sellers and has sold millions of copies. However, the marketing firm wanted to market the authors book and book trailer on 100 of our Christian sites. Well that's just one example.

Think outside of the box.