In Harmony follow the highs and lows of country singing duo

Book Review: In Harmony: A biography of Jack Blanchard and Misty Morgan 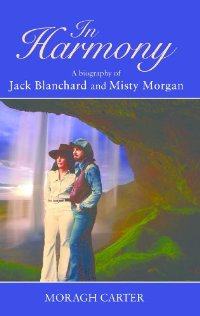 Author Moragh Carter offers an inside peek at the private lives of Jack Blanchard and Misty Morgan, best known for their hit song, Tennessee Birdwalk, which reached the number one spot on the country charts in 1970.

Through Carter, Jack and Misty share the joys and sorrows they faced over the years as they shared their music with the public in everything from run-down bars to festivals, packed auditoriums and even the Grand Ole Opry. What makes this book particular delightful is Jack’s humor that not only shines through in their music but also in how he tells their story.

Carter shares both the highs and lows this talented duo endured during their years in the music business. There were times of extreme poverty, when they struggled to make a living and aside from performing gigs, they took on extra odd jobs. At the same time, they had to content with bar owners that sometimes disappeared before paying them and even one at The Comic Book in Jacksonville Beach who fiend a fake robbery just to get out of paying them.

In 1965, the couple recorded an instrumental together called Gemini. Then in 1967, their first recording session at Woodland Studios in Nashville resulted in their song, Bethlehem Steel. Their next title - Big Black Bird - was a ‘Top 10 Pick’ on Billboard.

Their best times were during the ‘70s when they released a series of popular songs, including Somewhere in Virginia in the Rain, Humphrey The Camel and There Must Be More to Life than Growing Old but even then, record producers found exceptional ways of getting out of contracts and refusing to pay.

After suffering from ill health for a time, the couple made a major comeback going into the 2000’s with remakes from old vinyl records to digital editions of such songs as Call On Me, Back from the Dead – Volume 2 (there was no Volume 1, which again showed Jack’s amazing wit), A Little Out of Sync and Jack & Misty are Crazy. In 2004, the couple was inducted into the New York Country Music Hall of Fame and soon thereafter, into the Buffalo (NY) Music Hall of Fame in 2010.

But by far the most interesting aspect of their lives unfolds when Jack relates some of the things that happened over the years. For example, he relates that when he was a teenager, he joined a trio with two other young men, who were Mohawk Indians. The boys took him to races at the Six Nations reservation in Ontario where their parents ran a general store, post office and funeral parlor.

One night, the boys took him downstairs for a jamming session “by flashlight and candle light. It seems the entire family woke up and came down to cheer them on but when the lights went on, Jack realized “they were in the funeral parlor with two dead bodies in the audience!”

Years later, when Jack and Misty performed at a hotel restaurant and lounge in Sebring, Florida, they ran into trouble when they sang their song, Cows. Right in front of the audience, the owner yelled at them saying, “they should have known better” and promptly fired them.

This book, which is such an easy read, also includes a collection of Jack’s lighthearted and humorous stories. As Moragh noted, he has the innate ability to “paint with words.” When you purchase this book, be sure to read such stories as, ‘Henhouse Murder Trial Begins and The Last Day. You’re sure to have a great laugh!

To hear their music and keep up with their latest news, be sure to visit Jack’s web sites:

To pick up your copy of In Harmony: A biography of Jack Blanchard and Misty Morgan, go to: http://www.amazon.com/dp/B00AAI3LIA?tag=authl.it-20