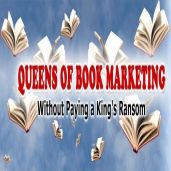 You Can Write—Really! A Beginner’s Guide to Writing Fiction

You need to be a member of Queens of Book Marketing to add comments! Self-marketing is tough and sometimes you feel like you are getting nowhere. So if you are looking for an effective and exciting way to promote your new book, look no further than a flashy promotional video from Engine House VFX. We offer a wide range of styles and tailor our work to suit you. Check out our page and website and please do not hesitate to get in contact!

I’m pleased to announce the release of my sixteenth Amber Quill Press romance. Wilderness Bride is a historical romance set in the Michigan Territory and blends love with adventure. This full-length novel was released on April 6 in paperback and various electronic formats.

In a moment of desperation, Kathleen Stanton flees her pampered life in Kingston, New York and ends up stranded in a small town in the Michigan Territory. Out of money and lacking a means of escape, she impersonates a handsome stranger’s mail-order bride. Kathleen calls herself Michelle and begins living a lie with her “husband,” Luther, in an isolated mountain cabin. She tells herself the arrangement is temporary until she can move on.

Luther can’t believe his luck when his beautiful blonde bride arrives, but something doesn’t feel right about his new wife. She has terrifying nightmares involving a man named Roger and is reluctant to talk about where she came from. But Luther is harboring a secret about his background and fears Michelle will abandon him if she learns the truth about him—and his family.

The couple tries to maintain their rocky relationship as they work to fight brutal townspeople and overcome harsh living conditions. When circumstances force Michelle to stay longer than she expected, she succumbs to her growing attraction and falls in love with Luther. But when they finally give in to their desires and agree to become a proper man and wife, a dark figure from Michelle’s past catches up with her, putting her and Luther in grave danger.

Wilderness Bride is available in ebook and paperback formats. Order your copy here:

Look for it soon on Amazon and B&N!

I am a South Africa who has recently published three books (paperbacks) with CreateSpace and ebooks with KDP. I have serious challenges of promoting and marketing my books throughout the US. The first two books are on small business development and the other is a 'children's' book. The books can be obtained from the following Amazon.com links:

From publishamerica.net
Repin Edit Check out my new book, When A Women's Fed Up . sites.google.com/...

Our book is a young adult fantasy fiction with zombies, dragons and werewolves in it. It can be found at http://www.amazon.com/Kais-Journey-World-Chronicles-ebook/dp/B0067R.... Enjoy!

Just in time for Valentines day. Go by Amazon and pick up my poetry book for Kindle. Its FREE TODAY ONLY! :) Everyone loves free books.

Wanting a novel that is simply "Crazy" check out my review of Indie Author "Kimmie Thomas's Book This Side of Crazy on www.thephantomparagrapher.blogspot.com