AP Miller has not received any gifts yet

Something About Me and My Book:
We are husband/wife multi published, best selling author team of AP Miller. We write Children's picture books, Young Adult, Middle grade books in scifi, fantasy, historical, thriller, horror, action/adventure and paranormal genres . We reside in the great city of Las Vegas with our four now very famous fur-children, Elliot, Tessa, Samuel and Pennypie who have their own stories to share.

Abigail is just the cutest and sweetest girl you're ever going to meet.  I'm not just saying this because she happens to be related to me and her mother is likely to hit me on the head if I don't.  She really is sweet, and she's cute as a button.  I think I like best, though, that she's as sharp as a tack.  So (drumroll, please) here is my lovely daughter Abigail Mae reviewing Ap Miller's Peter and the Pumpkin Patch.


This book is just wow! It's funny.  It's classic pumpkin!  And... it's like a mythical comedy story. I mean, pumpkins--they all get turned into pumpkins! Crazy funny.   I can't explain.  You will have to read it yourself.
p.s.: Funny, funny, funny!


Okay, tell me she isn't the coolest seven year old in existence!  Alright, here's my take on the book.  I have seven kids.  That's right.  Seven.  Go ahead, take a breath, breathe in...breathe out.  You okay now?  Alright, I have seven kids.  That means I've read more than my share of children's books.  Let me tell you a horrible secret.  Most of them suck.  There, I've said it.  Most children's books are pablum-spouting, boring, idiotic, patronizing, pedantic, semi-socially-conscious forays into the kind of lowest common denominator crap adults get thrown at them.

Thankfully, Ap Miller doesn't fall into this category.  I reviewed her YA book, The Boogedyman, and I loved that one, too. I just love when an author doesn't treat my children like stupid idiots.  I mean it, this book is clever and doesn't pander.  I loved it.  My twelve year old, my ten year old, and my seven year old each read it individually.  Then, they took turns reading it over and over to each other until they were practically reciting from memory.  It's great.  I love it.  You'll love it.

The Boogedyman by Ap Miller

For The First Ever Time, Out of Respect to the Young Adults Who Might Read This Review...NO SPOILERS HERE.

“What if the Boogeyman was real?” 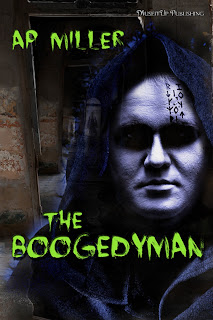 Plagued by horrific boogeyman nightmares since childhood, Murray Thompson is
deathly afraid of the things that he thinks “go bump in the night”. The one thing that keeps him
grounded is his psychiatrist of many years, Dr. Rosen. With regular visits since he was 11 years
old, Murray feels progress should have been made already, but with his dreams becoming more
intense and “real”, he thinks something needs to be done. Going to see his family, Murray
believes that this is the break he needs to keep sane. Feeling at home, and safe around his
family, it works for a time. But when the nightmares start up again, he once more relies on Dr.
Rosen for help. Once back, Dr. Rosen takes Murray on a journey to root out his longtime phobia
and find out if there is cause for his fear or all in his mind.


I have seven kids.  That's right, count'em--one, two, three, four, five, six, seven.  Do you know what that means?  It means I've read just about every book written for people who haven't reached the age of majority.  There's a weird dynamic.  We start out reading books to them, like Andrew Lang's Fairy books and The Little Prince and Water Babies.  Those are pretty fun.  Then, they learn to read, so we're bored as heck watching and listening to them haltingly fight their ways through basic sentences.  When they can read, most of what's available is complete junk.  It isn't until Junior High or so that the kids reach an age where anyone is writing something they might actually enjoy.

And let's face it...ninety-nine percent of what's written for young adults is just crap.  There, I said it.  I'm serious, though.  Most YA fiction isn't about the kids.  It's written to a conglomerate vision of what we think the kids are.  That's why every kid has the exact same challenges, hopes, and fears.  That's why every kid falls in love the exact same way.  That's why there's always one "goody two-shoes" character and one "bad" character.  Really, the genre is so darn formulaic that you almost want to keep your kids illiterate until they can appreciate Hemingway  Steinbeck, and Poe.

I'm happy to report that Ap Miller's book, The Boogedyman, doesn't fall into the trap.  I liked it enough that it ended up a present for my twelve-year old to read.  The book doesn't treat kids like feeble-minded idiots ready for emotional and intellectual manipulation.  I really like that.  It not only excites, but it provokes thought.  Maybe I'm an old fashioned kind of parent, but I find it important that a book make my daughter think.

The characterization is excellent.  I quite like the interactions between Murray and Doctor Rosen.  I also like the psychological horror element of the book.  It's a far cry from most YA horror which, if anything, pays only lip service to the psyche side of horror.  I think it's remarkable that a young adult book focuses so much on older characters as well.  You never see that.

The pacing is great.  It starts slowly and builds with each chapter.  The beginning could have been a little quicker, but there's no harm done.  The twists are unexpected but they don't cheat the reader, and I was left wanting more, so I better see some more in the series, and I know my daughter will go on an Ap Miller hunt if she doesn't.

Pick the book up.  It's out in about five days, and it's a good one.

Okay, so this was intended to be a blog reviewing books generally intended for adults. Along comes Ap Miller, the wonderful husband and wife writing team of Andrew and Patricia, and although they have a number of books for adults, they sent me The Boogedyman. Bekah, my oldest daughter, fell in love with that one and even wrote her own review on her own review blog. Okay, no problem.
Except my daughters really love Ap Miller, so when they sent me Peter and the Pumpkin Patch, I had to read that. Okay, next thing you know, I had to do a review of that one because my youngest daughter Abby insisted it needed to be said. The way I figure it, this is Rosser's Relaxed Reading Reviews. Give your kid something to do and you'll get to relax for a little while, right?

So then, I pick up Ap Miller's new book, the Trouble with Tessa, and it's good. My daughters love it even though it's a little young for them. They're wonderful children's books about a rescued dachshund, Tessa. I read the book and it was remarkable how easy it was to imagine a child rather than a dog. Mommy is spoiling Tessa and Mommy knows it, but she spoils the dog because it's a rescued dog.


Tessa has a problem.
She loves to whine to her mommy.
She is very spoiled, and sits on the floor by
her mommy’s desk and cries.


I'm getting to know Andrew and Patricia, and I know about the real Tessa, and maybe that makes my take on the book a little one-sided, but I loved it. For any of us who have ever had a rescued dog and dealt with the real fear of abandonment, you know what I mean. Ap Miller wrote this book as a tribute, and it's special to me. It's special anyway. It's a great book, and you should pick it up for a kid in your life. It's the first in a series, and you might as well pick up all of them. If I know Ap Miller, your kids will love them. You'll love them, too.

Hello A P Miller. My name is Fernando Sobenes and I want to invite you to read the prologue and the first two chapters of my novel: "The Evil Visitor" in my blog The Evil Visitor

AP Miller said…
We are honored to have you...