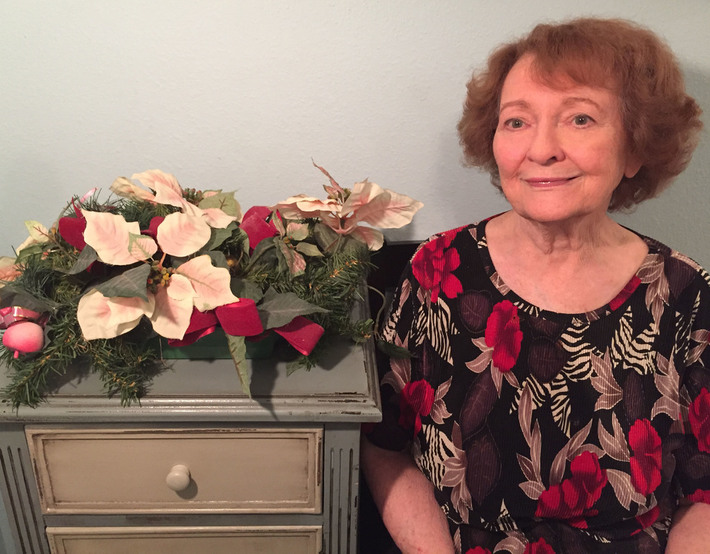 Mary Lou Emami has not received any gifts yet

Something About Me and My Book:
I was born in upstate New York in the town of Clifton Park, which is halfway between Albany and Saratoga. After marriage I spent most of my life in the suburbs west of Chicago, which is where I currently live.

I began having personal experience with extrasensory perception at a young age. When I was eight, I came upon the apparition of a ghostly man bearing a distinct question for me. This event was followed by other phenomena—a near-death experience at the bottom of a swimming pool, an eerie out-of-body event, a frightening automatic writing incident, vivid dreams, and forewarnings of future happenings, including one that told of personal danger. My premonitions continued into adulthood.

On taking my daughter for a psychic reading from Chicago clairvoyant Joseph DeLouise, I became aware of his amazing psychic powers and arranged a reading for myself. Over the next few months Joseph helped me overcome my shyness, find my first job since being married, grow as a professional, and excel at my work. I eventually offered to assist him in his office, where, for over twenty years, I observed this principled man helping others. I took notes, composed and sent news releases, and created publicity and marketing pieces. Over the years, Joseph and I often talked of his amazingly accurate predictions and the stories behind them.

Joseph’s subsequent request after his death that I write a book chronicling his psychic experiences, the amazingly accurate predictions that established his fame as a clairvoyant, and spiritual discoveries he came upon in his travels to the other side has inspired this rendering of Joseph’s incredible story.

My hope is that readers enjoy and find inspiration in this book.

An Introduction to Psychic Courier

If you knew someone who could see the future, someone privy to secret places—places few can access, wouldn’t you want to hear what they had to say? I most certainly did!

Psychic medium Joseph DeLouise was just such a person. While exploring otherworldly realms, he uncovered spiritual secrets—secrets that take away the fear of death. Using his clairvoyant gift, Joseph helped people build faith and understand that the soul, the real us, survives.

Throughout the book, we are witness to near-death experiences, out-of-body travels, observations of the spirit world, accounts of channeling, remote viewing, visits from the dead, and Joseph’s amazing visions and the stories behind them. The narrative is interwoven with first-hand insight on murder cases, forecasts of the stock market, and other paranormal occurrences including my personal experiences with ESP, strange happenings on my meeting Joseph, our past lives together and the work we did in this lifetime.

On occasion, I’d sit by Joseph’s side and watch in awe as he leaned back in his chair, rolled his eyes toward his forehead and went into trance—waiting to see which vision of the future would appear.

Early in Joseph’s career, a series of horrifying visions shakes him. Remorseful he can foresee future events and is powerless to keep them from happening, Joseph is reluctant to reveal his visions. Upbeat and positive by nature, he is greatly disturbed by the thought of becoming a prophet of doom—so much so that, he is tempted to quit his ESP investigations altogether. Yet, he is mindful of his destiny to help people. Reflecting on the dilemma, Joseph considers he might have been given the gift of prophecy to prove to people the existence of a spiritual world, a world beyond death…perhaps his visions were God’s way of drawing attention to the unknown.

Some of Joseph’s countless and amazing predictions include:

• The collapse of the Silver Bridge (of Mothman fame)
• The Ted Kennedy-Mary Jo Kopechne drowning incident at Chappaquiddick
• The Sharon Tate murder case
• The Zodiac Killer
• The ‘Black Monday’ stock market crash
• A royal funeral procession
• The return of maritime piracy
• A black market for the sale of body organs
• The ‘9/11’ attempt to bomb the White House
• The discovery of life on Mars
• The U.S. becoming a police state —“possibly a sort of dictatorship”
• Riots, revolts, “maybe even a revolution” spreading across our nation
• A scandal around Hillary Clinton and mail

Joseph did not restrict himself to headline-making predictions. He used the power of his mind to develop his ability to travel out-of-body to otherworldly realms. These astral travels afforded him the opportunity to explore the afterlife. While visiting the other side, Joseph discovered secrets of the spirit world and first-hand knowledge of eternal life, all of which take away the fear of death. His wish while on earth, and, in death as well, is to share with others the secrets he discovered.

A Strange Characteristic of Time

One day while astral traveling, Joseph experienced time in another dimension. It was not the time we know and use here on earth in our daily activities. Rather, this was the unusual attributes of time as found in spiritual dimensions.

Joseph said, “All things happen in spirit before they manifest here on earth.” He continued, telling me, “Time here does not work as it does in our physical world.”

I lived in upstate New York for a while, too.  Do you know where Groveland, NY is or SUNY Geneseo?  That's where the Met scouts found me.

Thank you, Mary Lou!  Very kind of you.

Welcome, Mary Lou!  Glad you could join us.