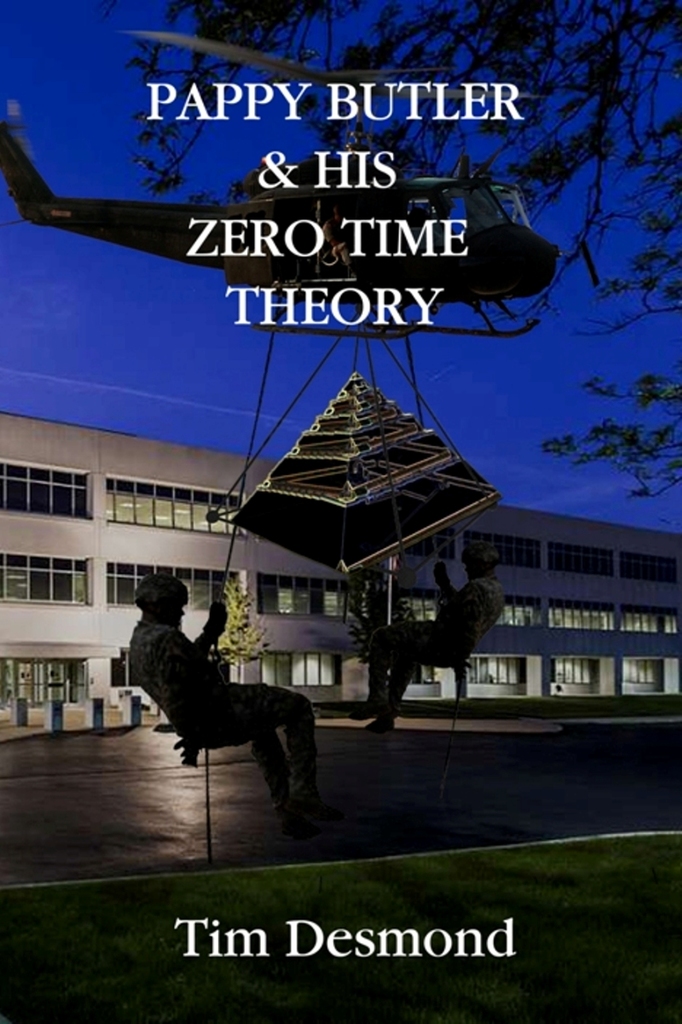 Pre Release notice was posted over Book Town during the week of April 25. The release date was Saturday, April 30, 2016.

High school physics teacher, Pappy Butler, feels he has a handle on a telepathy-type force that transcends distance and time, which he calls “Zero Time Theory,” and has tried for years to get his paper on this theory published.… 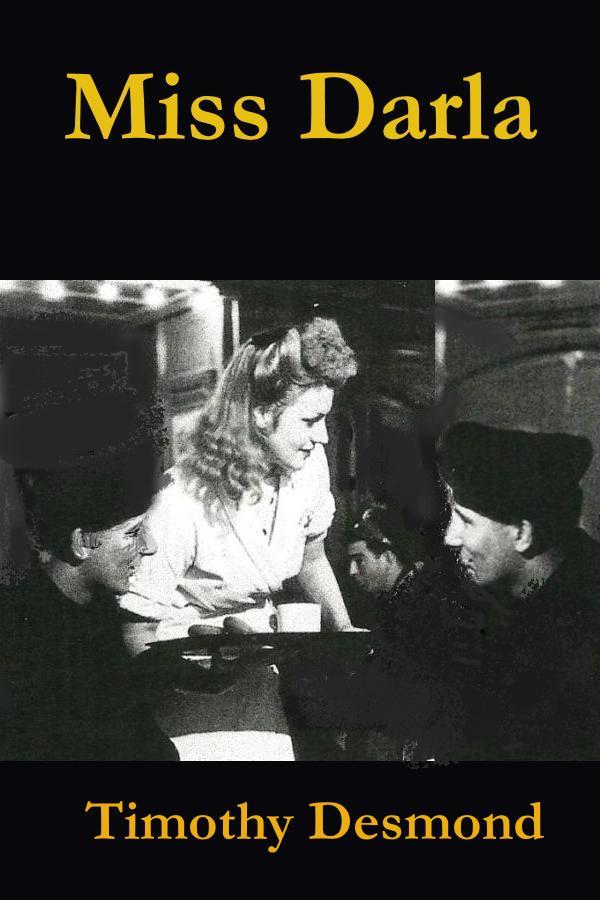 Knowing that there is a different audience out there, than was there ten years ago, a whole generation of non-print readers, it is time the 2005 print only version of this World War II story of Miss Darla became an ebook. Miss Darla is the first of two ebooks, from the original novel For Thou Art With Me, available for the first time in digital format.…

This was posted on Facebook when I was tied up in skirmish with Yankees at Roaring Camp .... but Tierney James has me included on her site for #4 of group of other authors. Interesting..... check out Journeys, Treks and Daylilies at ...…

Triggered Book Study 3 could have been this title.  Now I keep getting these things. For those of you who think all authors are raking in the cash, you may have cause to reflect on the reality of the publisher percentages. This came from another conversation with science-fiction author John Daulton. Turns out it is also another Hugh Howey comment. But, enough of the chatter, just hop over to the 2015 Author Earnings Report:…

I’m in a posse. I have been for a while. We are lead by our author friend Sunny Frazier. We first met at an author event at Chowchilla Library. I am not sure if the “The Posse” was formed at that time or not until later. Somehow I was in. We have a main concept of using some sort of clout with improving our promotions and marketing, as well as entertaining one another.

One of those tools is blogging. For example we were referred to another blog and author by Anne R.…

One more piece on numbers and stats, if you will, is on another reference that I happen to come across. If the previous “Triggered Book Study” was of mild or of any interest at all, this next reference is from a more studied source in the industry.

THIS STUDY by Hugh Howey IS DATED AS A YEAR AGO IN February on: February 12, 2014. It is of importance to anyone connected with this business, but I think it has merit and interest for anyone involved education, teaching, teaching… 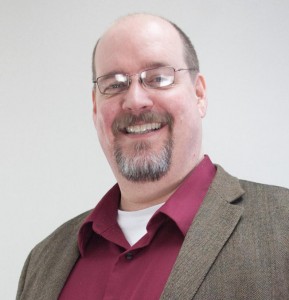 It was an honor to interview Galactic Mage science fiction and  series author John Daulton. There is more at his Daulton Books website at: http://daultonbooks.com and also on Amazon author page. For now, enjoy the interview below.

TD: Your first title in the series, The Galactic Mage,… 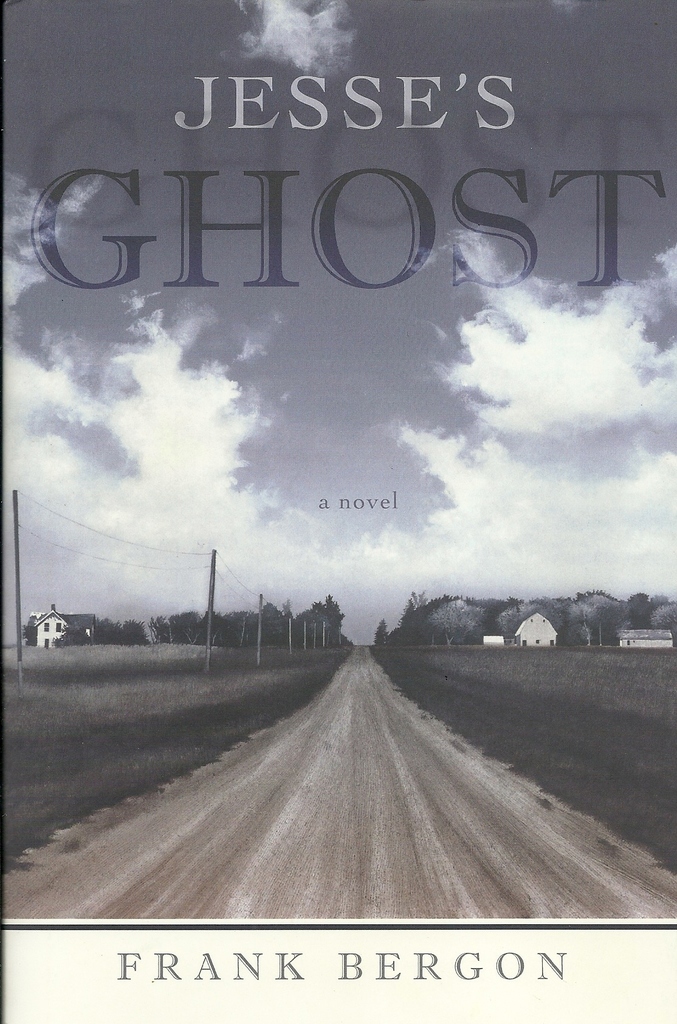 Frank Bergon has had a longer writing career than I at first realized.  He is a novelist, critic, and essayist whose writings focus primarily on the history and environment of the American West.  His Nevada trilogy consists of three novels spanning a century from the Shoshone massacre of 1911 to the current battle… 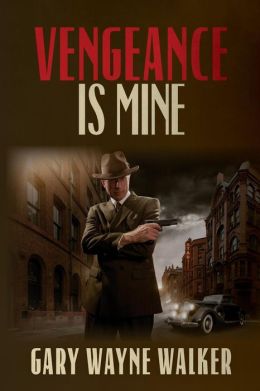 This is for author Gary Wayne Walker and his novel Vengeance is Mine released, I believe summer of 2013. He sat at a table with me at the Book Barn event last July. This is a great “noir era” story set in North Hollywood and San Bernardino.

How far is too far when it comes to revenge? In Gary Wayne Walker's debut thriller, "Vengence Is…

My New Interview with S.J. Francis

Author S.J. Francis has me featured on her three sites. Yes, shameless of me to boost this, but I was honored that she wanted to know more and pass it on.

The complete interview is at: http://sjfranciswriter.blogspot.com/

Another site for it is at: http://awriterwriteshere.blogspot.com/ 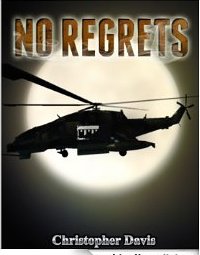 Author Chris Davis is a friend. He has KDP published stories on Amazon and other sites. One is No Regrets. You can find it at:…

While waiting for “Triggered Book Study” results, I want to give kudos and referral to other authors. This one is for fellow Black Opal author Christopher Allan Poe and his book The Portal. It is a fine thriller.

This is the title of a new study just begun. Perhaps it should be a different and longer title, like “top books study” or “book marketing study based on success of best sellers.” Both of those would be accurate as it is triggered on the question of what gets books to the top of sales lists?

I recently came across the success of one author, when having a quiet conversation with the author’s relative at a small family gathering. Keeping that author anonymous for now, it raised… 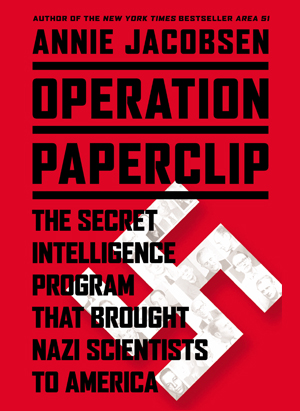 After listening to a radio interview this morning, apparently I am a year late, for the hardbound release. I understand that the paperback is released today for the book Operation Paperclip.  I went to the website to catch up.

As a reader or a movie and video watcher gets through with a viewing or reading a book, one can say, “yeah, I see how that went and fit together.”  But as an author and a writer putting things down on paper or in a file ……. It isn’t easy.

A few years back I attended a weekend writer’s conference. One of the speakers was First Blood author David Morrell who gave a great talk on his career, working on the TV show of Route 66, referring to himself as “Rambo’s…

A Book and a Donut 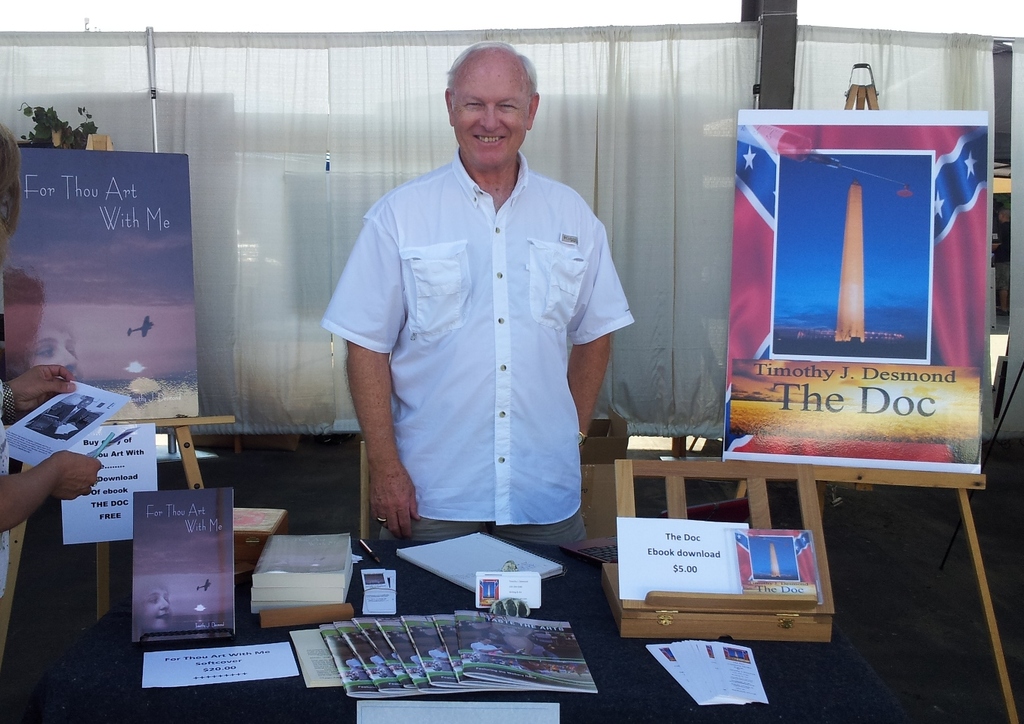 Example above is at an Arts event.

One could wail about the demise of and closing of bookstores. In the realm of the business, AKA: “brick and mortar” stores, as opposed to online stores.  In our area of a population of 500,000, there are only two stores remaining. By “store,” it was pointed out to me, means “new books” store and not meaning “used book store.”… 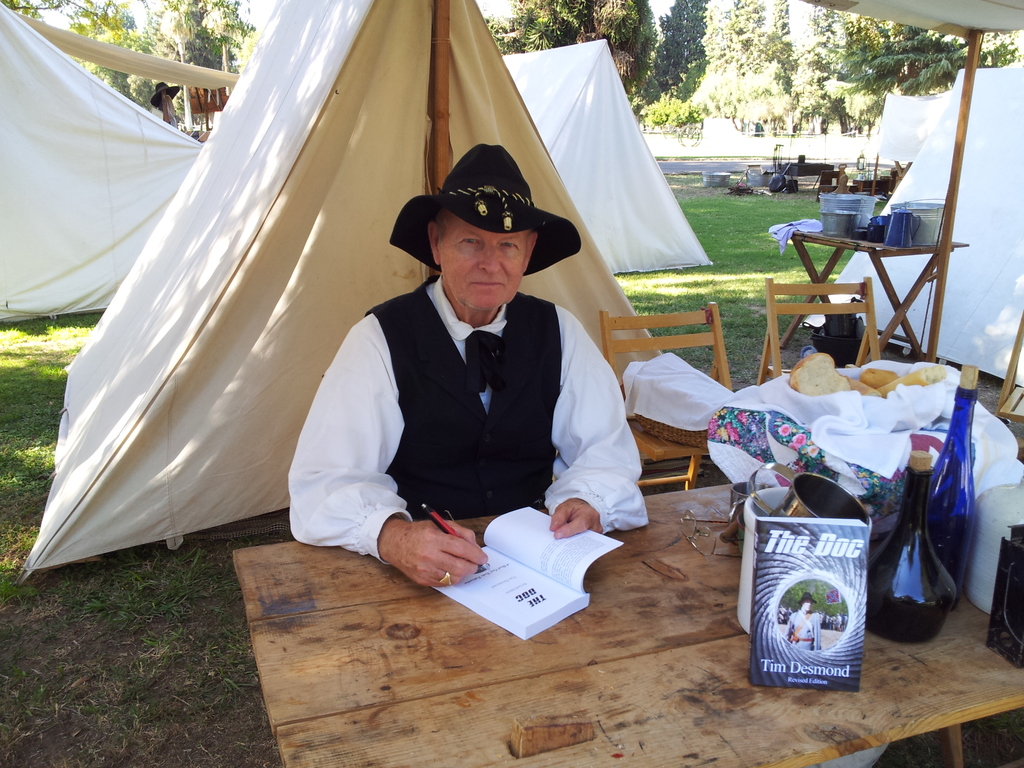 This is posted after the date of October 18 – 19, but that is all right. Since the story in the novel, THE DOC, is about Civil War re-enactors who are in trouble with Homeland Security, a Civil War reenactment is the perfect place to garner followers. This last of the 2014 reenacting season events in the San Joaquin Valley was at Kearney Park in Fresno… 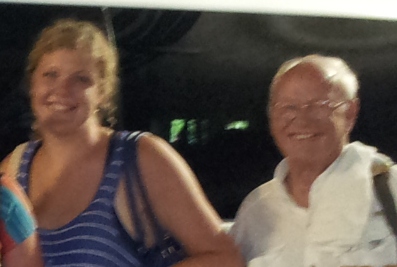 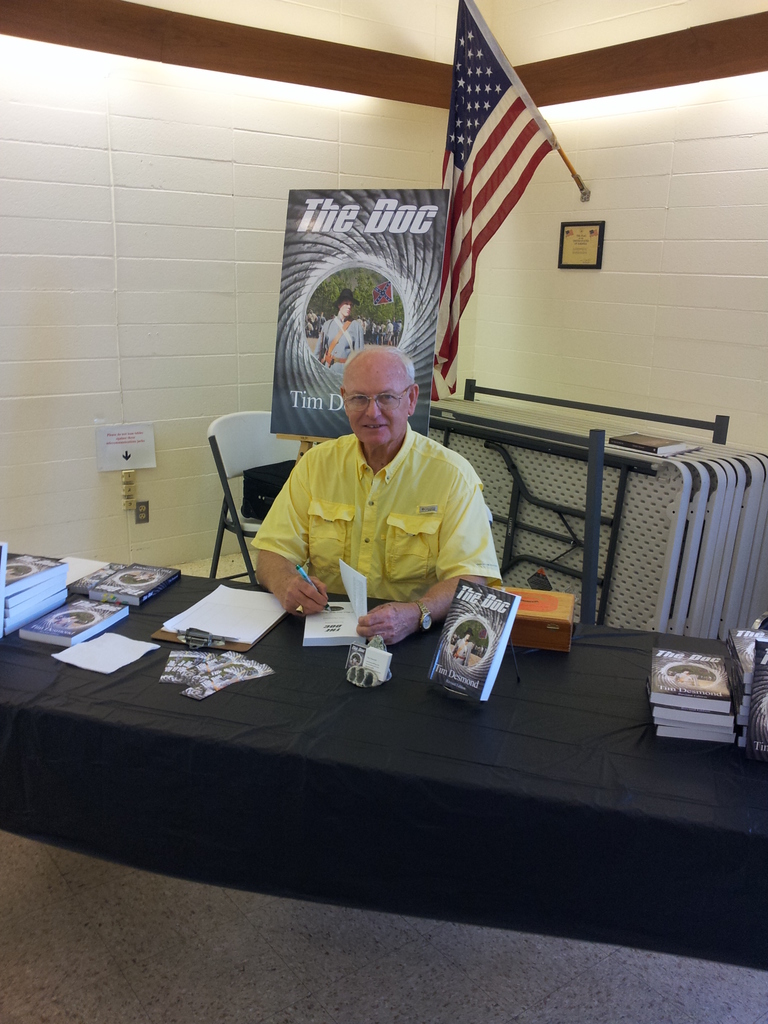 It’s with pleasure that I’ll be signing books at the Oakhurst “Junction Plaza” shop of Branches Books and Gifts. I believe all book stores need a boost. Anything I can do to help promote these business places, by reaching out to readers, followers, and friends seems an important thing. I know that one cannot always give a gift of books, because sometimes it is such… 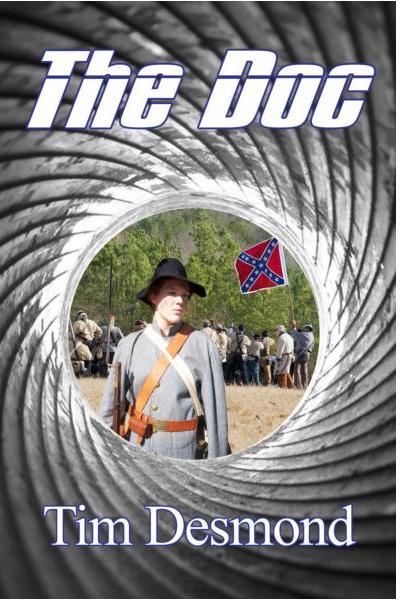 Two weeks ago was the author interview I did on Central Valley Talk.com’s show called “Let’s Talk Business” hosted by Mike Scott. I realize that many either could not watch it on a normal work day at 1:00 PM Pacific Time, and “live,” or had other difficulty finding the site.

Here it is on You Tube, with no headline, no ads, and the book’s cover at the…