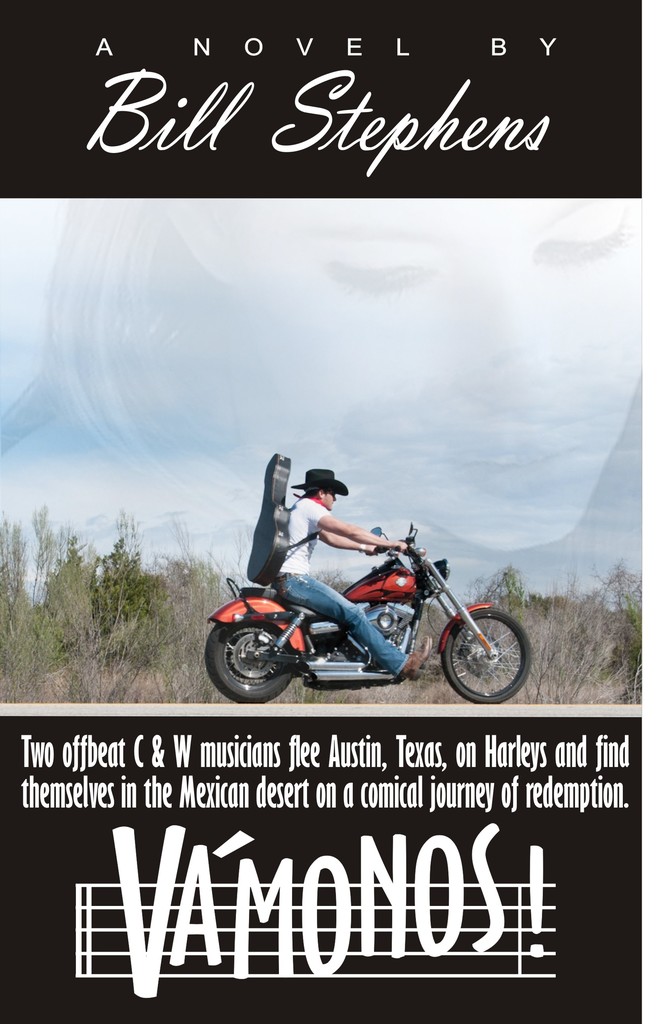 “Bill Stephen’s Vamonos! takes a wry and realistic look at human nature and the result is fun, lively, innovative, and highly entertaining. Instead of editorial comment on the character’s foibles, the…

The Democratization of Publishing

Writers are experiencing the democratization of publishing. Read here the exciting blog that set writers free at last.

Log onto"
www.publishersmarketplace.com/members/billstephens
and read "A Beary Merry Christmas" for a little Christmas cheer.

This series of articles on the blog "Read It and Weep:"

you might find interesting and useful. They address the issue of
inculding a "Comparative Book Survey" and a "Market Survey" with… Continue

Create a Market Survey For Your Fiction Submission

OK, here’s the problem. You are an unpublished author, and an editor has requested a complete manuscript of your novel. They read the manuscript, and they “just love it,” BUT they’re not sure of the market for the book. There is something a little quirky in the book that the editor likes because of its originality, but will it sell? So they take a pass rather than assume the risk on your work.

Why not head this problem off by including two additional items with the manuscript: a… Continue

A Bar of Soap

I would entreat you to log onto the Blog post, " A Bar of Soap ," and if you have any knowledge of this amazing bar of soap, to contact me as quickly as possible.

I boxed up my ego, my pride of accomplishment, my certainty that I am a good writer, my belief that anyone who feels otherwise simply is out of touch with reality, and submitted my first chapter of Vamonos!, my second novel, to Ray Rhamey’s blog “Flogging the Quill” – “Turn the Page” critique.…

Winner of the Great Erotica Throwdown

Read why and who won at www.publishersmarketplace.com/members/billstephens

I just completed a major dose of literary genre fiction when I finished reading Ann Packers' The Dive From Clausen Pier. This novel was named "One of the Best Books of the Year" by Entertainment Weekly, Newsday, San Francisco Chronicle, and San Jose Mercury News. It's been made into a "Lifetime" original movie. It was a national best seller. It's accolades are numerous and include "genuine suspense," "a page turner," "incredible detail," "exceedingly real," etc.

I recently posted a…

The Case For Cognitive Critters

Ok, I'll admit it. I lack what it takes to write serious literary fiction. Stephen King settled that issue for me in his book, On Writing, when he said, "You will never be a great writer unless you are born with it." Great writers must be passionate about something, right? I'm only passionate about things I shouldn't eat or drink.

So the arrogance of someone so lacking as myself, offering up a thesis that literary fiction doesn't sell and inferring that cognitive critters…

Flags of Our Fathers

The movie, "Flags of Our Fathers," cast a whole new light on an encounter a couple of decades ago in San Francisco's North Beach Area. I didn't know it at the time, but I met a man in a cozy Italian restaurant that arguably changed the history of the world.

You can read the story behind the book, the movie, and my encounter with Joe Rosenthal at www.publishersmarketplace.com/members/billstephens

The natives are restless. Readers of the free serialized novel, Horizons Past ( www.horizonspast.com ) are getting anxious as the novel approaches the midpoint of Act II. They want to keep the action going, rather than reading a chapter each week. The question, "How can we get a copy of the whole book" keeps cropping up.

For those unfamiliar with Horizons Past, here is a brief synopsis:

"Horizons Past examines the possibility of two…

Free Serialized Novels are Really In

The Good Book says, "Be sure to cast your bread on the water, and it will return to you." The publishing industry seems to be hueingto this philosophy more every week.…

Our writing group, Daedalus, has undertaken an interesting project. This group of five women college/high school professors plus me, meets monthly to critique each other's work. We are the distillate of probably three-dozen former members who came and went over the last twelve years. Our membership stabilized about five years ago and seems destined to continue into the…

I just became a co-agent on a project. I don’t know if agents often invite clients to share in commissions when they bring good stuff to them, but mine did. I didn’t refuse the offer. The whole story of how I became a co-agent is worth reading on www.publishersmarketplace.com/members/billstephens…

Someone in the film industry asked me to do a “pitch and a “treatment” for my novel, Horizons Past ( http://www.horizonspast.com ). He has a couple of ideas to try to get it into development as a movie. I had some notion of what a pitch is, but I’d never heard of a treatment. Fortunately, he gave me some examples and illustrations to follow. But I decided to buy Writing Treatments That Sell, by Kenneth Atchity and Chi-Li Wong to…

Last week I experienced a side of writing/publishing/marketing I never knew existed. My mother-in-law, Rita Kerr, asked me to accompany her to an adult education class entitled “Writing, Publishing & Marketing Your 1st Book (or 7th)” offered by a local school district. It was quit an eye opener to learn the author teaching the class claimed to make $250,000 per year self-publishing and…

A Visit With Peter Matthiessen


Peter Matthiessen came to town two weeks ago for a reading and a literary luncheon. This was his second visit sponsored by Gemini Ink of San Antonio, Texas. He gave a writing class during his first appearance over five years ago, which I attended. Afterward we had a short visit about the Aransas Wildlife Refuge and about fly-fishing for Redfish on Texas' Laguna Madre flats. I sent him a letter confirming some of our thoughts on a possible visit.

I was quite amazed when I…

When I sold my businesses about 15 years ago and announced to the world that I was allowing myself one year to write the “Great American Novel,” I received seven books on how to write novels for Christmas. I actually read a couple of them. One of those devoted significant space to the concept of “never join a writers group. Never, never, never join a writers group that serves anything to eat…