The Mystery of the Lost Avenger - Review by Martha A. Cheves Charlotte Wheeler suspected that sabotage was happening at the Grumman plant.  She was able to figure out the faulty hinges for the Aveng… 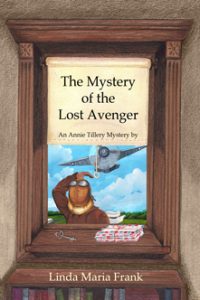 The Mystery of the Lost Avenger - Review by Martha A. Cheves

Charlotte Wheeler suspected that sabotage was happening at the Grumman plant.  She was able to figure out the faulty hinges for the Avenger's bomb bay doors were being randomly replaced for the good hinges, by someone who had access to the plant.  Charlotte and her buddies checked all the planes and prevented the faulty parts from being switched.  They did their best to stop the saboteur, things got rough and Charlotte was attacked one night while she was waiting to catch him in the act.

Charlotte Wheeler was a WASP during WWII.  She not only helped build the planes, she also flew them to their destination where they were turned over to the fighting pilots.  She was scheduled to fly one of the bombers out but noticed a problem with the bomb bay doors.  While she went to check on something the plane was given to another WASP to deliver.  Her name was Brenda McPhee and she never made it to her destination.  Her plane disappeared.

Many years later Annie, who is Charlotte's great grand-daughter, finds out that the plane has been found and there was a letter inside that was written by Charlotte.  Through further research and the help of her boyfriend Ty, Annie decides to solve the mystery of the downed plane and who the saboteur was.

As with all of the Annie Tillery Mysteries, this one kept my interest.  It not only had some history, it also had a great mystery and of course a ghost.  Looking forward to reading the next in this series.