A Reason to Be: A Novel by Norman McCombs

Braveheart meets Love Actually in this incredible journey of discovery. 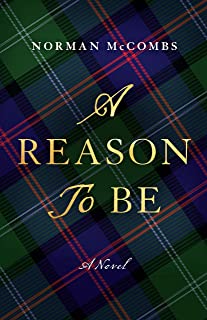 As this compelling story begins we find the protagonist Douglas McCombs distraught, having nursed his wife Hope, the love of his life, with Alzheimer’s for the last 5 years, she has died. Grief-stricken he falls into the deepest of despairs and goes to that place only those who have lost love ones will know. Unable to remain in the family home he moves to an apartment and there gives up on everything, his reason to be lost…

Luckily his good friend called Mark calls to see him and is devastated by the shadow of a man Douglas has become. Gently he reminds him that he is an accomplished man with hundreds of patents and inventions to his credit, and reflects of the time when he was at the White House receiving the National Medal of Technology and Innovation for his inventions and advances in health science technology from the President, reminding Douglas about his own incredulity that he was actually there, and how he asked himself, was it his upbringing, his wife Hope, or his Scottish ancestry?

Finally, Mark wins him over and thus beings his re-emergence into normal life, catapulted forward by a chance incident which is just the catalyst he needs, the meeting of librarian Suzy Hamilton. Encouraged by her love of research, suddenly he finds himself rekindling his need to discover himself through his genealogy, which traces back to Scottish clans with their fierce pride, and loyalty. His journey takes him across the world, places his ancestors at important historical events, and introduces him to the determined and strong men, and women, whose blood flows through his veins.

Coming from Scottish roots, I know first-hand of the deep pride the Scottish feel in their family, its roots, and the glorious country which is their home. No matter where in the world they are, you can’t take Scotland out of a Scot, and I should know, living in France. This feeling and strength grows steadily in Douglas as he begins to understand more, and more, his family and how it has evolved including the sacrifices each generation has made for their children.

With these revelations come other more personal ones, as he slowly begins to permit himself to feel again, he learns anew how to smile, look forward to life, and yes, he even rediscovers his reason to be.

At the beginning of this incredible story there was heartrending sorrow, and then slowly the pages like petals unfurl, and with them so does Douglas. Emotions grow and events unfold until eventually, having feverishly been unable to put it down, I discovered with great sadness that I had reached the end of the most incredible story, I have ever read. Highly recommended! Norman McCombs was born in Amherst, New York, in a home built by his immigrant father. He graduated from Amherst Central High School, where he met his late wife, Grace. Norman went on to earn an AASEE from ECTI, along with a BSME and an ScD from State University New York at Buffalo while serving in the New York Army National Guard.

Norman is a Fellow of the American Society of Mechanical Engineers, which honored him with the EDISON Medal, their highest patent award. He has received numerous other awards for technical achievement, including the National Medal of Technology and Innovation from President Obama for develop- ing the portable oxygen concentrator credited with saving and extending the lives of millions with lung diseases. He has over two hundred patents worldwide, primarily for air separation technology used for a myriad of oxygen applications around the world.

Norman is also an officier commander of the Chaîne des Rôtisseurs, as well as a sculptor, classical guitarist, and an avid fan of opera and the fine arts in general.

An epic tale beginning in 15th-century Scotland and flowing through time to modern-day New York, A Reason to Be is a tale of loss, hope, and the transcendent power of the love that bind us to one another.

Douglas McCombs is an accomplished engineer and recent widower driven to discover the truth of who he is by studying the people and places he comes from. After losing his wife to a battle with Alzheimer’s, Douglas is left devastated until a chance encounter with a sharp, compassionate librarian named Suzy Hamilton on the steps of the New York Public Library shakes him from the throes of grief.

With Suzy’s help, Douglas takes up genealogy and begins an investigation into his Scottish lineage that takes the reader on a sprawling journey through time and the remarkable lives of Douglas’s ancestors—from legendary highland clan chiefs and American war generals to humble farmers and family men. As he traces his ancestry through the generations, Douglas manages to discover not only the roots he was searching for, but also a brand-new reason to be.