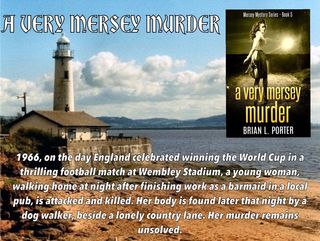 A Very Mersey Murder - Review by Martha A. Cheves

A woman is brutally raped and murdered, her body left close to the old disused lighthouse in Hale.  Then came a second and finally a third murder.  All being committed by who the police feel is the same person.  One was a barmaid, one worked with animals and the third was a policewoman.  These murders happened thirty-nine years ago with no arrests being made and the case assigned to the cold case files.

This is the information Detective Inspector Andy Ross has just given to his people that make up the Merseyside Police Specialist Murder Investigation Team.  His biggest concern regarding this cold case is that there have been two more recent murders that are very similar to those from thirty-nine years ago.  The first being a barmaid and the second being a veterinary student.  If the person doing the killings now continues to follow the original murders the third will be taking place within just a few days and that person will be one of their own... a police woman.

I've read every book this award-winning author has written.  His Jack the Ripper series kept my nerves tied into knots from beginning to end.  I've read this series - Mersey Mystery - and I will admit that the 1st book was good, the second was better and as I read the third and forth they got even better but I must say that book five takes me back to the Ripper series!

As I read murder mysteries I judge their ability to fool me by how quickly I can come up with the guilty party.  If I have at least the person figured out by around 20% into the book it is a good book.  If it takes me 50% to decide who it might be, that is a very good book.  And 75% marks the book as an extremely good mystery.  But when it takes me all the way to the end and the author has to finally inform me as to who the murderer is I rate that book one of the best.  For me this book fits in with the Best.

Now I'm waiting on book 6!  But if I were you, start with the full Mersey Mystery Series which can be seen at http://getbook.at/MerseyMysteries .