Sunday is sport day, firstly the NY Rangers finally found how to score on a power play. It has taken them most of the season, and the fact that Avery scored twice is something. And I don’t mean scored as with a woman, for which he is of course more famous.

Today is also the day I catch up on the British sport, thank goodness for SETANA. I now can see more British Soccer and Rugby than if I were still in England.
After yesterdays dramatic Liverpool 4 – Manchester Utd 1 result which brings the English Soccer Premiership back into some sort of fight. Today Chelsea beat Manchester City 1-0 bringing them back into second place. After the soccer I caught back up on some of yesterday’s rugby games. Not the Super 14 for those in the southern hemisphere but the 6 nations.

Wales, who had seemed unbeatable until the dramatic loss to France in their last game, were taken to the wire by Italy. Ireland struggled against the Scots and that left England’s game against France today. The England rugby team has struggled this season to put it bluntly. Yet today they thumped the French team, which as we having basically been fighting the French since 1066 means a lot of an English sport follower. 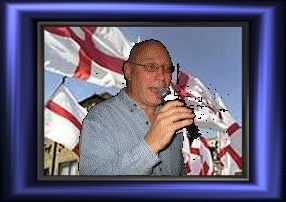 America is girding up for it’s normal homage to St Patrick or as many of them must say Saint Paddy (who). Just to cause trouble try asking an American who St Patrick was, you’ll lose about 50% of those asked. If you ask them to describe the flag of St Patrick you’ll lose about 99% (it a red diagonal cross on a white background). Why such a big thing for March 17th in the US? Do you really need such an excuse for drinking.

What about March 1st St David’s day for the Welsh (give somebody a daffodil as that is the flower of St David), or St Andrews for the Scottish (Scotch is a drink not an abbreviation). The most important day however is April 23rd, St George’s Day, St George being the Patron Saint of England.

This next week I’ll explain about how the Union Jack and how it is made up of three separate flags of Great Britain.

Today I am appearing on http://www.blogtalkradio.com/booksandblogs
You can read about me and my book at http://morganmandelbooks.ning.com

A fresh review yesterday took me up to 51 at Amazon, and the variety I am really pleased with

Next Saturday at 11am on my blog radio show
http://acrossthepond-storyheart.blogspot.com Call-in Number: (347) 237-5398
A BOOK AND A CHAT
I have Beth Fehlbaum talking about her latest book “Courage in Patience”