All Saints: Murder on the Mersey - Brian L. Porter, Author 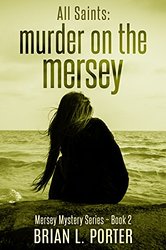 All Saints:  Murder on the Mersey - Review by Martha A. Cheves, Author of Stir, Laugh, Repeat; Think With Your Taste Buds; A Book and A Dish
Detective Inspector Andy Ross pulled the unmarked police Mondeo to a halt, its right side wheels pulled up on the pavement outside St. Matthew's Church in Norris Green in an effort to avoid restricting the traffic flow along Brewer Street...  There were already two police patrol cars parked on the street, together with another pool car identical to his own which he knew would have brought his assistant, Sergeant Clarissa, (Izzie) Drake and Detective Constable Derek McLennan to the scene...  As he neared the scene, Ross could see Dr. Nugent on his knees, his assistant, Francis Lees beside him, both men obviously intent on carrying out their initial examination of the body...  "Oh, my God," Ross exclaimed as he drew closer to the scene...  "I told you, sir,"  his sergeant said, quietly.  "Yes, but this... this is, well, nothing short of bloody monstrous... the victim, a man in his mid to late fifties, has been almost totally eviscerated... "Who found him, Izzie?"   "The poor bloody priest"

Father Gerald Byrne, along with his sister, grew up in Speke Hill, an orphanage that was run by the Roman Catholic Church.  He developed a deep interest in theology and the Church which eventually brought him into the priesthood.   After years of traveling all over the world it also brought him full circle back to St. Luke's where he would be not only their priest but also the priest of Speke Hill.  But, shortly after his arrival the murders started.  Bodies are being placed in various cemeteries after being totally disembowel and mutilated.

This book took me down a very winding road!  As much as I tried to determine who was carrying out the brutal murders, the harder it was for me to justify my suspicions.  And at the end... I was totally surprised.  As always, Brian L. Porter has written another book that can't be put down.  I can never get enough of his books.  He has a Stephen King/Dean Kunze/Jeffrey Deaver frame of mind when he writes putting him right up there in their class of authors.