Ann B. Keller's Book Review of Sojourn With A Stranger

Can this lady write or what? I wish she would have written my press release for the book. Everything I've heard about Ann -- that she's a wonderful person -- is certainly confirmed. Thank you, Ann. 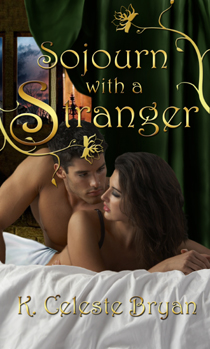 Ann's Review for Sojourn With A Stranger:
By K. Celeste Bryan
From Book Masons

A tragic accident at sea leaves beautiful Raine Brinsley an orphan. Alone, apparently penniless, without the cost of passage to return home, she accepts employment in the household of Derek Stafford, the wealthy owner of the ship partly responsible for her parents’ deaths. Derek is attracted by Raine’s magnificent emerald eyes, fiery red hair and delectable body from the moment she sets foot on his property. In her, he sees an opportunity not only to hasten her return to her Scottish grandfather in Maine, but also the chance to provide him with an all important male heir. They come to an arrangement, thus setting into motion a devilish plot of treachery, deceit and death.

Lyman Stafford, Derek’s brother, did away with Derek’s first wife before she could produce a young heir who might interfere with his inheritance. Somewhat reassured by Lucinda’s demise, Lyman is horrified to learn of Derek’s agreement to sire a male heir upon a mere servant.

As her grandfather races to bring Raine home, she falls gravely ill. However, Raine is not alone. The ghostly apparition of Lucinda, Derek’s first wife, appears again and again throughout the novel, finally rising up against Lyman Stafford himself, the man responsible for her own death.

This is a wonderful paranormal romance, which quickly picked up speed as the story progressed. The spiritual undercurrents in the novel were interwoven into the plot with the skill of a great Scottish author. Will Lucinda find her revenge? Will the young lovers be reunited in triumph and love? Ah, but what kind of Scot would I be if I told ye the end afore ye gazed upon the first page?

We Scots are rather in tune with the paranormal anyway. It's in our natures! I enjoyed reading Sojourn, Kat. I was hooked the moment I saw the cover, but you got me by the second page. Well done!