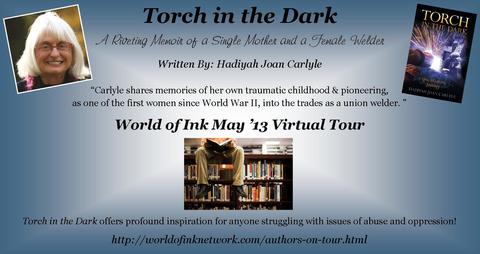 The World of Ink Network will be touring author Hadiyah Joan Carlyle’s riveting memoir, Torch in the Dark: One Woman’s Journey in May 2013.

“Hadiyah pulls her life together in a Bellingham shipyard using a welding rod and a tough as nails attitude…No one has even come close to the depth and detail of the sixties that Carlyle reaches.” ~Jack Remick, The Deification and Blood

Torch in the Dark tells the moving story of how Hadiyah Joan Carlyle, a single mother haunted by memories of her own traumatic childhood, pioneered as one of the first women since World War II to enter the trades as a union welder. Beginning in a Jewish immigrant neighborhood in New Jersey, the story moves through San Francisco’s colorful Haight-Ashbury in the sixties to arrive at Fairhaven Shipyard in Bellingham, Washington. For Hadiyah, welding become a metaphor for healing from the dark past as well as a path to self-reliance and economic survival.

While providing insightful perspective on the culture of the 1960’s and 1970’s, Torch in the Dark offers profound inspiration for anyone struggling with issues of abuse and oppression. 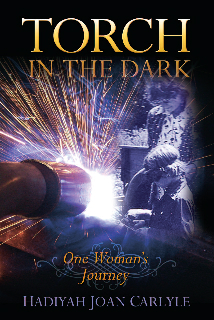 What Readers are Saying:

“Torch in the Dark" tells the author's story through a series of tightly crafted vignettes and flashbacks. As many women of her era, Joan Carlyle was raised without defined ambition or skills, even the domestic ones. Estranged from her parents, she often felt alone and out of place. She entered adulthood not knowing who she was. She drifted and drifted. Her stories remind us how "freedom" isn't always free. Eventually she became an activist, a mother and a welder.” ~Lucky Charlie

“In prose as hot as her welding torch, Hadiyah Carlyle transports the reader to a time early in the women's movement that must never be forgotten. As one of the first female welders in the West Coast shipyards, Carlyle paved the way for women working in the trades today. You will applaud her strength in sharing this powerful story.” ~Arleen Williams, The Thirty-Ninth Victim 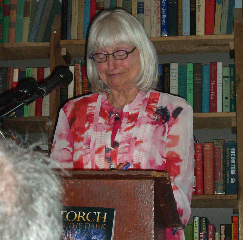 Hadiyah Joan Carlyle grew up in a Jewish immigrant neighborhood in New Jersey, became active in the Civil Right movement of the sixties and migrated to San Francisco’s colorful Haight-Ashbury to be part of the counter-culture there. In the seventies, she was the first and only female shipyard welder in Bellingham, Washington, north of Seattle.

In the eighties, Hadiyah returned to the East coast to earn her MSW at Rutgers University. In 2003, she completed the certificate program in Memoir Writing through the University of Washing Extension. She is an active member of Seattle’s thriving community of writers.

Though welding is no longer a part of her life, she continues to carry the torch for the empowerment of the oppressed.

You can find out more about Hadiyah Joan Carlyle, Torch in the Dark and her World of Ink Author/Book Tour at http://tinyurl.com/chrfo3t

To learn more about the World of Ink Tours visit http://worldofinknetwork.com