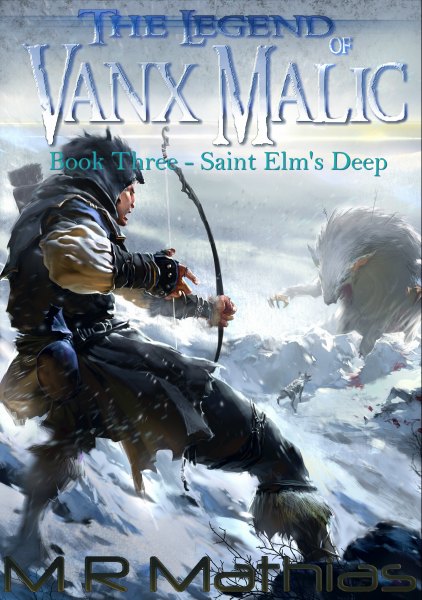 "Once again Mathias has created another exciting masterpiece of a novel with the familiar captivating style that we have grown to expect."

M. R. Mathias is the author of the international bestselling “Wardsone Trilogy,” the Locus Poll nominated “Dragoneer Saga,” fantasy series, and the “Crimzon and Clover Short Story Collection.” He is also the author of the award-winning horror thriller “The Butcher’s Boy” under the pen name Michael R. Mathias.

“Saint Elm’s Deep” is Mathias’ latest entry in the highly-rated fantasy series, “The Legend of Vanx Malic.” Book One of the series made it to #1 in the Amazon Fantasy/Mythology bestsellers list in May 2013 and Book Two has been as high as #3 on that same list.

In “Saint Elm’s Deep,” our hero, a half-zythian bard named Vanx, is being drawn to places from his father’s infamous past. After helping Darbon get over the loss of his first love, and finding a map on a grueling hunt, Vanx and his new companions decide to travel deep into the Bitterpeaks. There they hope to find the fabled Hoar witch's palace in a hidden valley of the treacherous and magical Lurr Forest.

The story broadens, as we delve into Vanx's past and the future of as-unlikely-a-group of heroes as you will ever find. The journey, and the strange creatures they encounter along the way, makes this a fantasy adventure that you just don’t want to miss. Action and adventure, drama and thrills, and a barrel-keg full of adventure await readers in Saint Elm's Deep, the third installment of M. R. Mathias’ The Legend of Vanx Malic.

“We get a deep look at Vanx’s father Captain Saint Elm here, and the characters around Vanx are superbly drawn, complete with depth, emotions, and problems all their own. Especially, the Hoar witch” -  Digital Wizard.

And even better news, from October 1st through the 5th 2013, everyone can get The Legend of Vanx Malic Book One “Through the Wildwood” and Book Two “Dragon Isle” FREE in the Amazon Kindle Store here:  http://www.amazon.com/dp/B009A0Q5D2   If you don’t have a Kindle, just get the free Kindle reading app for your phone, PC, or tablet. Then get the books. It is that easy.