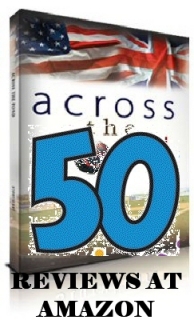 Across the Pond by Storyheart came out in October 2008, today it had it’s fiftieth review at Amazon. That is not bad in just 5 months

And it was another good one so I thought being 50 I would share it.


Across The Pond is a book that I thought was for teens or young adults. However, I am 37-years-old and found that I could not stop reading once I started! Very well-written, this story is about a young teenage boy named Fred who starts his trip "Across The Pond" (from England to the USA) with a resentful attitude towards his parents but ends his trip saddened to be leaving his newly found love named Brittany in the USA.

When Fred's parents win a trip for two to Australia, Fred is upset to learn that he will not be able to go along. He has the choice of visiting a relative in Scotland or a family friend in the USA. His choice was influenced greatly by his parents because the trip to the USA would be less expensive than the one to Scotland. Little did he know that the family friend had an attractive daughter (Brittany) about the same age as him and that they would develop a great friendship that blossomed into young love. This story recounts the experiences of the two friends...Fred learns the differences in vocabulary between the USA and England versions of English, enjoys some American baseball, comes to Brittany's rescue against a group of bully boys, and encourages Brittany to stand up for herself in the midst of strife.

I would highly recommend this book for teenagers and adults alike because I thoroughly enjoyed it!