Capitalism for Democrats: Why The Country Needs It Now by Martin Lowy 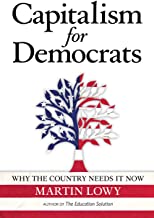 Martin Lowy writes this informative book from a lifetimes experience as a lawyer. Banker, entrepreneur and writer. A lifelong centrist Democrat he asks his readers to take a little time out of their busy lives to consider what capitalism has achieved.

He then goes on to point out that capitalism works because it puts the control of the market into the hands of millions of people allowing them to make billions of decisions for the good of the people and economy, rather than entrusting that power to a few elites.

This book examines capitalism in depth. The author, using examples, graphs and references to three of his previous publications, explains the fundamentals of capitalism, and scrutinises it in detail. In doing so he looks at how capitalism affects and the lives of everyday people, its social impact through history, assesses its highs and lows, its global impact, equal opportunities, the free market and much more, and in doing so gives his readers all the information they require to make their own informed decision on the subject.

For me before reading this enlightening book the moral basis for choosing capitalism was simply because it puts the power into the hands of the ordinary people, however, reading this book I realised that this premise is naïve. Reading the author’s detailed examination of the subject, I finished his book feeling empowered by the knowledge of the subject gained from its pages.

At the end of the book, it is this paragraph which for me makes a very important and true point, ‘All human institutions are imperfect. The questions social scientists wrestle with are how to create institutions that work for large majorities of people to help them to live productive lives with respect and freedom from unwarranted intrusion. In creating such institutions, contradictions are inevitable. It is only through persistent good will that we can succeed in charting the best course through a changing world.’ In a nutshell, this is what capitalism aims to achieve.

This is an extremely educational and helpful book which clearly explains capitalism in an easy to understand format. Highly recommended.


Martin Lowy, a native New Yorker, was educated at Amherst College and Yale School, where he was managing editor of the Yale Law Journal.

He spent the first 20 years of his career as a corporate lawyer, practicing as a partner at Hughes Hubbard & Reed and Gibson, Dunn & Crutcher. His main fields of practice were banking a securities law, with an emphasis on regulated institutions. In addition to representing banks, mutual funds, a major accounting firm and a large auto company, Mr. Lowy represented the New York State Superintendent of Banks in problem bank situations and represented the Federal Deposit Insurance Corporation in the liquidation of Franklin National Bank, at the time the largest bank failure in American history.

Mr. Lowy served on the staffs of several commissions to reform the banking laws in New York and nationally, and taught in the graduate banking program at Boston University Law School. He has served on the boards of directors of banks and corporations.

Mr. Lowy left the practice of law to become a senior bank executive. He served as vice chairman of a regional bank for three years.

After that tenure, the savings & loan debacle story attracted him. He found that the books being written on the subject were trying to sensationalize the story; the facts, he felt, were sensational enough. So he wrote High Rollers: Inside the S&L Debacle, a New York Times Notable Book of the Year in 1991. The U.S. Supreme Court cited High Rollers as the authority on the subject.

During the 1990s, Mr. Lowy founded a high-tech sports simulation company, which he ran for seven years, creating state-of-the-art games and making sales throughout the world.

He took a few years off, having such a good time playing golf and enjoying the Florida sunshine that he wrote no books for five years. But at the end of 2008, the financial crisis subject grabbed him, and he dove into Debt Spiral: How Credit Failed Capitalism full-time, resolved to bring to the economic crisis of 2007-2009 the same professional and direct approach that he took successfully in High Rollers.

Published in October 2009, Debt Spiral is, Martin Lowy believes, an important book. It extracts from the Crisis the lesson that America and Americans rely too much on debt and that the Government’s various subsidies for debt are part of the problem. He intended to write a more historical history of the savings and loan debacle after Debt spiral.

Then in 2016, a friend challenged his knowledge of financial history. Marty found his knowledge lacking, so he set out to learn better what had made finance tick from World War II to the present. That study turned into Instability: The Fragility of Banks and What To Do About It, published in 2017. Policy makers have a lot of wrong ideas about banks and why they fail.

Still meaning to get back to the savings and loan story, Marty got sidetracked again by the question of whether capitalism is the best economic system for the United States. He concluded that it is but that many Americans, especially many Democrats, do not understand what capitalism is or how it works. That resulted in writing Capitalism for Democrats: Why The Country Needs It Now, published October 15, 2019.

The savings and loan story again is next, maybe in 2021.

Martin Lowy is neither a leftist nor a rightist; nor is he a wishy-washy centrist who advocates a little of this and little of that. He finds that both the left and the right have seriously flawed views of the economic world. His mission is to explain the economic world to the public so that they can see behind the various masks that ideologues adopt.

In 2020, Democrats will choose a candidate for President, who may or may not be in favor of maintaining the capitalist economic system in the U.S. Many people do not understand capitalism very well. It has been historically and can in the future be a force for good, promoting economic growth and better living standards. And it can be moral, as well. That good kind of capitalism relies on consumers, through the marketplace, to set prices and allocate resources.In order for consumers to do that, the system needs regulation to protect consumers and competition. And it needs to be accompanied by an adequate safety net for people who do not succeed and government guarantees of fundamental human needs, such as health care. Capitalism for Democrats explains how this good capitalism works, how different it is from some of the capitalism that we have now, and why it is morally superior to systems that rely on elites to set prices and allocate resources. This is a fairly short book that reviewers have said is “concise” “Plain English” and “enjoyable.” Almost all reviewers also have said that Capitalism for Democrats is not just for Democrats–it’s for all Americans and for anyone else who wants to see how a good capitalism works.

“This is a powerful and thought-provoking defense of an economic system that Lowy shows has brought healthy prosperity to the largest amount of people in history.”