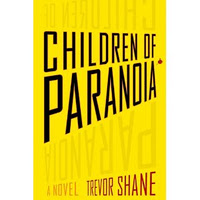 You read about death every day, see the reports on television. Some are called ‘accidents.’ The murders seem senseless and go unsolved. Did you know, however, there is a secret War going on all around you, every day? It is being waged by two sides intent on killing the other. If your family has experienced numerous deaths throughout the years, well, you might become involved in the War. “Children of Paranoia” introduces you to this War.

It will show you some of the participants, but the reason behind the killing are…well, as one characters says, “One side is good, one side is evil.”

Twenty-five year old Joe grew up with family deaths before learning about the War. When he turned eighteen, he became an assassin for his side. He followed the rules and made his kills. After nearly getting two of his friends and himself killed in New Jersey, his contact sends Joe to Montreal for a job. While tracking his quarry, Joe meets Maria, a college student.

Love blooms even in the heart of a killer. Unfortunately, the job doesn’t go well and an innocent is almost killed. After a period of recuperation followed by a few more assignments, Joe returns to Montreal to finish what he started and to see Maria. By this time, he’s sick of the War and wants out. Maria reveals two devastating pieces of news. One, she’s pregnant.

Two, she’s only seventeen, which by the rules of the War means her baby gets handed over to the other side. Joe finishes his last job and he and Maria run, knowing they will be pursued by not only his side, but the enemy as well.

This story is an interesting but poignant metaphor for the senselessness of killing, be it by rival street gangs, feuding families, or entire countries.

It portrays the War as always existing, and never ending, with nobody really understanding why certain people need to be killed. It shows that while the majority of mankind lives normal lives, certain individuals are recruited to kill or to orchestrate and assist the killers. This is a powerful story, one where you ask for an explanation, but after the last chapter, you wind up looking at certain aspects of life and wondering about the point of them.

Joe: 25, killer for his side of the War. Talented, intelligent. His mother is the only family he has left. However, he starts to question his assignments and the reason behind the War. Finally, he tires of it.

Maria: 17, college student. Doesn’t understand the War, but falls in love with Joe.

There are others, but these two are the main focus. I couldn’t get a good picture of them in my mind, but that’s okay, I don’t think I was meant to. It seemed a little too easy for Maria to accept Joe and his killing, but that’s okay, the focus isn’t on ‘reality’ but metaphor.

Basic, no nonsense, to the point. What needs to be said is said and no more.

Clinical. Lots of short, to the point sentences but long paragraphs. You know the old axiom of writers need to show not tell. Shane shows you by telling, if this makes sense, and he pulls it off very nicely. I found only one minor problem, one which is a personal quirk I try to avoid in my writing. Example: He pulled the door open. I prefer: He pulled open the door. I know, minor point, but Shane does this kind of thing a lot and I, as an writer and former editor, notice it and in places it bugged me. However, not to the detriment of the story itself.