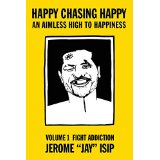 Wow, what an inspirational book! So what is it about, I hear you ask?

Well, is it a memoir, a wake-up call, confessions, a fly on the wall book, inspirational, horrific, well I could just keep going. However, if I had to use one word it would be mind-blowing!

Jay Isip is very brave writing this very open book about his life. He writes with passion and absolute honesty about his paths in life, and looking back can see the reasons behind his behaviour.

Deliberately under achieving at school, he was a rebel and started very early on drink and drugs. He discusses very candidly alcohol addiction and the mind set of an addict, and how hard it is to come to terms with being labelled as one. Enter the world of drugs, as he says, he has tried them all, uppers, downers, the lot. I have lead a very sheltered life in respect of drugs, and his descriptions of the effects of Ecstasy and other drugs made for fascinating reading.  However, looking back he can also see how the effects of drugs made him instantly ‘Mr popular’ and gave him a very warped outlook on life, behaviour and who were his friends.

Deep down though, Jay has true determination and grit, and it was this which lead him to a very successful MMA wrestling career. He was dedicated and well respected in the ring and outside. This book will be fascinating to fans of MMA, it contains a lot of his career, some brutal, sometimes horrific truths, and some really great photographs.

Then the tide turns, he loses three professional fights, then has his last Championship Title fight at Mass Destruction. Suddenly the self-destruction button kicks in, full pelt.

Mr Bad Boy is an understatement, girls, drink, booze, run-ins with the law, you name it, he done it, until he had a desperate suicide attempt. Suddenly Jay was made him look within and see himself in the cruel light of day.

And a harsh light it was. However, it gave him the strength to pick himself up, and change.

Now he is a successful business man, and best-selling author. It has been hard, but with the love and support of his family and friends, who are very important to him, he now lives by the beach and continues to fight professionally.

This book is fascinating to read. At the end I found myself totally in awe of this young man who has not only come through very difficult times but has had the strength to look back and write this very candid book as total inspiration to others. He done it, and you can too!

Available from Amazon in Paperback http://www.amazon.com/Happy-Chasing-Aimless-Happiness-addiction/dp/...