Lindsey Paxton was once the number one defense attorney in New York. She fought for those who were innocent, but charged. Her instincts were her lifeline, never failing her, as they guided her in her choices of who to defend. Or so she thought. Until she won a case she would forever wish to have lost.

Her client, an accused rapist, kills and rapes a woman only a day after being set free. Destroyed by her role in the woman's death, Lindsey blames her father's controlling ways for what she has become, and runs from her career and life.

Years later, the past becomes the present. Her father has cancer, and Lindsey is forced to leave her career with the Washington branch of the FBI. She finds herself facing the responsibility of running her father's law firm with the reluctant help of hotshot attorney Mark Reeves, a man who sparks her temper while also managing to tempt her heart. With his help she finds herself fighting the emotional battles of the past, tempted to trust both him and her instincts.

Now, faced with a case inherited from her father so similar to her career-ending one, she now must decide if her instincts will lead her down the path to saving an innocent man or setting free another killer. But while she fights her own battles, someone watches, wanting from the past what he had failed to get the first time: Lindsey.

Something about this woman got under his skin. Such a tough exterior, yet so much pain underneath. It made him want to touch her, to hold her. She looked into his eyes: emotions glistening in the form of unshed tears.

And somehow he knew he had been given a unique glimpse beneath her exterior. One very few ever saw.

He reached out and tipped her chin up, knowing he shouldn’t touch her, but unable to stop himself. “I bet those green eyes can slice air in the courtroom.” His gaze dropped and lingered on her lush lips. So soft, so full, so in need of being kissed. He couldn’t remember ever getting his business senses blurred by a woman. Yet here he was, thinking about kissing Lindsey Paxton, daughter of his ex-partner.

A woman who was way too connected to a world he had no intention of ever revisiting.

“That was a long time ago,” she said, yet her eyes held a distant look, as if she was remembering.

Mark reached out and playfully tugged at a long blond curl, wrapping it around his finger. Lindsey sucked in a breath, as if shocked. He suspected she wasn’t. They both felt this strange tension between them. It begged to be acted on.

He offered her a soft smile, trying to convince himself to leave her alone. “You are very hard-headed. Maybe you do resemble your father in some ways.”

Her eyes narrowed, and her response came quickly. “If that’s the case, then you resemble him as well.”

Mark couldn’t hold back his laughter. “You are more interesting than your father ever was.”

She took him off guard by offering a desperate plea. “Will you help me, Mark?”

She reached out and touched his arm. He felt the desperation in her action. “Mark, I can’t take this case. I can’t. I know you don’t know me and have no obligation to help me, but I really, desperately need you.”

He couldn’t help it. He liked the way that sounded. How many men had she ever said she needed? He would bet none. It fired up the wholly male part of him, and made him want to rise to the challenge. He tried to keep the heat raging inside in check. But his finger moved lightly down her cheek, as if on its own accord. She shut her eyes, and he knew she absorbed his touch, rather than fought it.

He leaned forward, near her ear. “You need me, do you?” he teased.

Lindsey opened her eyes. They stared at each other for long, intense moments packed with a potent undertone. Moments that had nothing to do with business and everything to do with attraction. “Yes, I do,” she whispered. “I need you.” 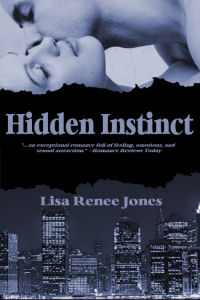