High Heels & Beetle Crushers: The Life, Losses and Loves of an Officer and Lady by Jackie Skingley 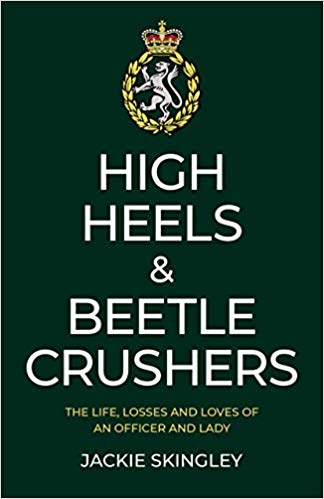 Jackie Skingley, the author of this fascinating memoir begins by taking her readers back to her earliest recollections, bitter sweet childhood memories of Christmas 1944 in Reigate, Surrey.

Immediately, through her vivid descriptive writing I was catapulted back through the decades to wartime Britain. I could almost imagine being her, a small frightened child, hearing the air raid sirens going off and huddling in the damp, musky shelter with her heavily pregnant mother, and her Nanny Rose.

For those of us who were lucky enough not to have been alive during the war, these memories are priceless reminders of a bygone era, a time which should not be forgotten and a generation who bravely endured so much so that we could live in freedom and peace. Yes you can still see some of the old aircraft fly, and there are films about the wars but nothing can compare to the memories written by those who lived through those years, listening with dread to the droning of the German bombers as they flew overhead along Bomb Alley, towards London, and the sound of the bombs dropping, never knowing if they would be safe, or what carnage the enemy would leave in their wake.

The price of peace was appalling, and shaped the future of the author and her family, as it did for so many people. Life went on, and the incredible community spirit of those post war years are brought wonderfully to life throughout these pages. These were times when families and friends were truly there for each other, the local bobby knew everyone and mums were to be found in the kitchen making jam and cooking Victoria sandwiches. However, most families have some secrets and the author bravely reveals those too.

I read with interest of her convent education by strict nuns, and with envy of her life as a young woman at a time where young ladies wore taffeta dresses, gloves, and beaded bags, and of course had to adhere to strict etiquette codes.

Despite being very popular, at a time when most girls wanted to settle down, marry and have a family, the author wanted more, she had a deep desire to serve her country.

Accepted into the WRAC, she completed her training and began an interesting and eventful military career both at home and abroad, in which strong friendships are formed and love is lost and found.

A powerful coming-of–age story, this memoir gives the reader a real insight into post war Britain, and the spirit of its people. This strong spirit is typified in the author, as her reader discovers within these pages as she overcomes adversity, and defiantly stands resolute and true to herself, and those she loves.