While struggling to hide the true meaning of the recent Talpiot Tomb findings, the Jesus Discovery team blunders into a trap set by the Hebrew author of the Book of Revelation, exposing Christian Rome's darkest secret to the bright light. 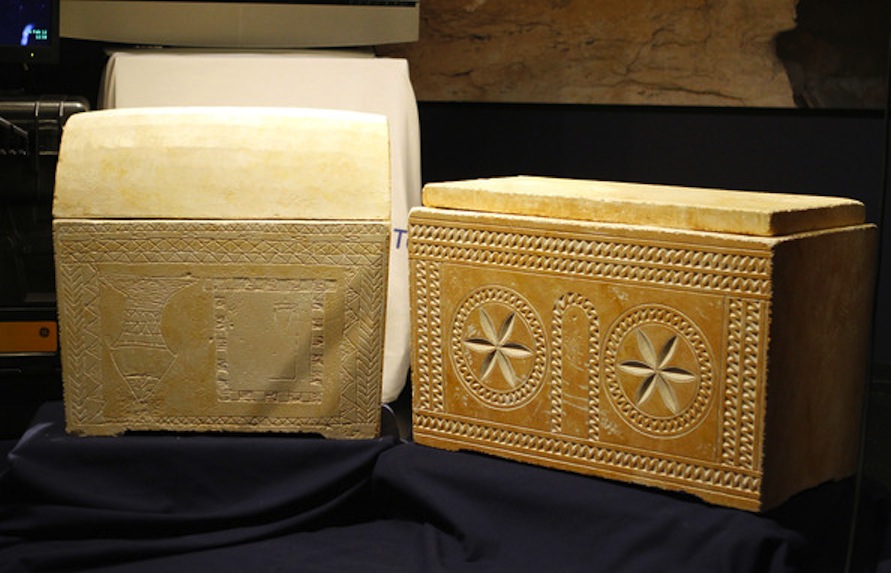 As detailed in earlier releases and articles, Mr. Buddy Page, the author of Finishing the Mysteries of Gods and Symbols, by Seven Star Hand has been tasked to complete an ancient sting operation against religious leaders. This ancient plan is supported by numerous ancient prophecies that allude to the "arising" of an individual referred to as the "Messiah" and Teacher. Hebrew prophecies, including the pre-Christian Book of Revelation, symbolically encode numerous details necessary to prove the time, deeds, and identity of this individual, along with other pivotal wisdom.

These details were expertly hidden because the prophets knew that Rome would become Christian Rome and cruelly oppress the world for an entire age. In fact, the prophecies predicted Rome would use money and religion to secretly gain control of the entire planet, before the "Messiah" initiates the Apocalypse, to end their age of darkness. As reiterated in earlier articles and releases, the long-misused term "apocalypse" actually refers to the revealing of long-hidden secrets and the solving of ancient mysteries, which consequently causes the rapid collapse of traditional dogma, assumptions, and by logical extension, any wealth and power associated with them.

In addition to the destruction of the Second Temple and Jerusalem by Rome two millennia ago, Judea and the surrounding region were ruthlessly subdued and ethnically cleansed of the Tribe of Judah and all who looked like them or knew the truth about what happened before the destruction of the Temple. Throughout most of the ensuing two millennia, Christian Rome ruthlessly stamped out any evidence of the truth to impose its deceptive versions of history and religious philosophy, as presented in the New Testament. Jews were horribly oppressed from the outset of Christianity because Rome scapegoated and demonized them as part of the effort to establish the lies of Christianity. Rome was actually hiding its own crimes, by blaming them on others. They have continued this same pattern of behavior into modern times.

History clearly records how groups like the Essenes, Gnostics, Ebionites, Cathars, and others were demonized and eliminated, and their texts and knowledge destroyed, because they possessed some evidence of Rome's lies and crimes. The Inquisition and Crusades were likewise efforts to bury the truth and extract secrets from certain victims. The Knights Templar eventually suffered the same fate. Nowhere in history was Christianity ever introduced without force, oppression, and fear. This alone should be proof enough that Christian Rome has always lied about the true purpose of their religions and the source of the New Testament.

In recent years, Simcha Jacobovici has led an ongoing effort trying to establish that a tomb in the Talpiot neighborhood of Jerusalem was the burial site of Jesus and family, based on a group of names on the ossuaries. He was joined in these efforts by James Tabor, a well-known and respected Biblical scholar and author. The tomb itself also sports a very unique symbol above the entrance, adding to the mystery and bolstering claims that it was unique and worthy of scrutiny. They've had a tough time convincing other Biblical scholars though, because if true, it would mean the stories of Jesus' bodily resurrection are false. It would also mean that these Biblical scholars would have to admit they were wrong, and most will never do so, until left with no choice but to acknowledge the truth. Their livelihoods rely on the Bible, thereby most will never proactively seek the truth about this history, if it promises to contradict the Bible, which is their cash cow.

Seeking more evidence to bolster their claims, robotic arms and remote cameras were used to enter the adjacent Talpiot Tomb in 2010-11, which has been sealed beneath a multi-story apartment building built in the early 1980s. The unique images and inscriptions found on two of the ossuaries are now the subject of a new book (The Jesus Discovery) and a Discovery Channel special titled "The Resurrection Tomb Mystery" first airing on April 12th 2012. Sadly, this team has missed an opportunity to tell the truth about the imagery in that tomb site. They have gone to great lengths claiming this as a Christian tomb showing the earliest evidence of Christianity and the fish image on one ossuary is a whale expelling Jonah. This interpretation is easily disproved by anyone who can read the symbology. The ball beneath the fish is not Jonah, but the spring equinox sun rising into Pisces. This diagram is how you determine the current age on the zodiac and the end of Second Temple period was during the age of Pisces. It is also showing a time stamp for spring, the time of Passover and Easter, as well as the traditional symbolism for the light returning to dispel the darkness.

In actuality, this team has stumbled into a well-laid trap set by the true author of the Book of Revelation, who was Hebrew, and not Christian. The evidence in this tomb, when compared to the burial method and contents of the Dead Sea Scrolls, and details within the Book of Revelation, proves that Revelation was authored before the destruction of the Second Temple. This is decades before Christian Rome claims that someone named "John" received it in a vision from "Jesus" via an angel. It is also 2-3 centuries before the New Testament. Sadly for religious leaders, the prophets always knew that Rome would "defeat the saints" and then go on to oppress the world for the next two millennia. With that foreknowledge, a long term plan was implemented to hide vital evidence in different settings, so it would be available to us far in their future, hence right now.

For example, the Dead Sea Scrolls were not buried in haste during the revolt, but patiently and purposely placed into exactly 11 caves during the 11th 360-year cycle of the Hebrew calendar. This same "star-time" code is also used extensively throughout the Book of Revelation, proving the link to those that buried the scrolls. Now, we have two ossuaries from the exact same time period, locale, and group of people with unique symbology that purposely encodes time-stamped messages, left by a prophet, who used the exact same symbolic time codes. In addition to other details, these ossuaries also encode a time frame, which is spring 2012. They are telling us when the prophet of the second Temple expected the Apocalypse and the time the future Messiah would decode these ossuaries and "arise."

The evidence shows that the Book of Revelation was authored before the destruction of the temple by someone buried in that tomb. Rome's deeds for the next two thousand years were expertly encoded in its symbology. The Hebrew prophet of the Second Temple was the Teacher of Righteousness of the Dead Sea Scrolls, not someone named "Jesus" or "John." Now you have redundant proof from the true prophet himself. Rome killed the Teacher of Righteousness, the true Messiah of the second temple period. That was the spark that ignited the revolt against Rome. The stories of someone named "Jesus" (more truthfully "Joshua"…) are "strong lies" created to hide the abominable crimes committed by Rome and its agents to steal Revelation and other texts, which they deceptively modified to become the New Testament.

The article Illuminating the Talpiot Tomb and Jesus Discovery Controversy is part one of a four-part series. It proves the truth about the symbology of these tomb sites and what they encode. This provides solid evidence that Rome has always lied about the birth of Christianity. These two ossuaries provide stunning proof that all three so-called Faiths of Abraham are blatant deceptions. Now we have archeological evidence, left by the victims themselves, in the form of a prophetic time capsule, purposely designed to be opened during the spring of 2012, hence right now.

To truly understand the supporting evidence and rules for the symbology, reading Finishing the Mysteries of Gods and Symbols, by Seven Star Hand is an absolute requirement.