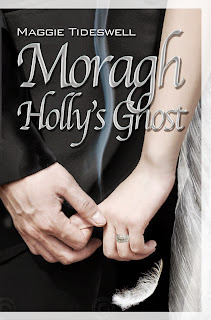 Moragh, Holly’s Ghost – Review by Martha A. Cheves, Author of Stir, Laugh, Repeat; Think With Your Taste Buds; A Book and A Dish

‘Joshua skimmed down the page, not registering what he was reading, when a tiny advert squashed between Lost & Found and Obituaries jumped to his attention.  It simply read:
Husband needed.
Call Holly Turnbull 021 768 9223
No pranks please
Joshua read it a second time before he scrubbed both hands over his face, his elbows crumpling the newspaper on the table.  What was the world coming to, if women had to resort to dailies to get them a man?  He wondered.  Would this poor, misguided soul even want the kind of man who was like to respond to this silly ad?...  Surely this Holly woman didn’t think she was going to get a bona fide offer of marriage from this tiny advert, did she?... He waited for his laptop to boot up, then typed ‘Holly Turnbull’… Holly turned out to be a journalist and not bad to look at either.  He was impressed, even though it seemed odd that a woman like her would advertise for a husband.  Oh, well, each one to her own.  She would do nicely in his newly formed plan.’
Joshua Jordan has found a way to push Nicole, his fiancée of four years, into making the final commitment by scheduling a wedding.  He will give her an ultimatum of time and if she doesn’t find it within herself to meet the deadline, he will take this Holly woman up on her marriage proposal for just long enough to bring Nicole to her senses.
Holly Turnbull didn’t actually place the ad for a husband in the daily paper, her three best friends and roommates did.  Holly’s ex-husband Donald has refused to allow her to see their two boys for long enough.  The girls believe that with a husband, Donald will have no excuses for not allowing her to see the boys.  The girls also believe Donald’s wife Gwen is the one that is really behind him not allowing Holly to see her kids.  So when the marriage proposal comes in from Joshua Jordan, Holly sees that this just might be the answers to her problems with Donald.  But with the proposal comes something that no one would have guessed... Moragh.  Moragh is a spirit from the past who starts sending Holly messages demanding that she ‘tell her story’ and to her surprise, the story starts at the very home belonging to Joshua.
This book has it all… murder, mystery, love, hate, ghosts, spells and the supernatural.  The tale is so twisted that you think you have it all figured out only to find that you’re wrong.  The characters are strong and if you believe in ghosts, very believable.  I really didn’t want this book to end but to just keep on going.  Moragh, Holly’s Ghost is a very entertaining book.  I loved it.
Review Stir, Laugh, Repeat at Amazon.com