Review: In Writing A Tribute Writer Shares His Own Destiny...

The Elder:
A Tribute

I was honored to have had the opportunity to read The Elder by
Monolin Moreno with Lillian Vallee, a renowned literary professor and
translator, providing the Introduction. How many of us show the love we
have for another through the creation of a statement of memoriam to that
individual (and other elders)?

Indeed, The Elder is so much more than that, for in showing his
love and respect for the elders in this book, Manny Moreno has also
shown us an important part of his life and the lives and rich culture of
his people. I have read many fictional books that are based upon
our Native Americans Indian culture and learned much, but none of them
have given me the opportunity to love their characters as I did in
Manny's book. For it is these individuals who have and are still trying
to retain the ceremonial and prayer heritage that was once so much a
part of their lives. I am grateful for that experience!

The Elder begins as the funeral is conducted for Harry Jack and
Manny comes and says a prayer to Grandfather to receive Harry Jack's
spirit. But soon, Manny is enclosed within a blanket. Harry had
sponsored Manny and he would be received today into the Black Wolf Gourd
Clan and participate as part of that clan as honor is given to Harry
Jack. It is as they dance and wept that Manny began to look back as to
how he and Harry Jack had crossed paths.

,
when there was a dance contest. All of the young were dressed in full
ceremonial garb except Harry came with just one feather. As if ordained,
Harry won the contest, dancing as he had always danced so many years
before... At that event, Manny stumbled literally into Harry and though
he immediately apologized. Harry scolded him. This was to be the
relationship that seemed to occur over and over for many years, though
Manny continued to treat his elder with the respect due.

Manny begins to tell his own story at this point, sharing that his life
was essentially one long drunk until one night at an AA meeting he met
Chili Willie Burns and Beaver. They encouraged him to go to the Three
Rivers Indian Lodge, an alcohol and substance recovery center for Native Americans

And Manny was for the first time to enter the sweat lodge. While Harry
talked about Indian ways, about sobriety, Manny began to feel good and
at peace. But then it got hotter and hotter; that first time Manny ran
out of the lodge. Harry called him crazy. Beaver came to help him back
to his place.

But Manny came back to the Lodge and he stayed...

Both Harry Jack and Manny were stubborn men and they had many "run-ins"
over the next decades. However, slowly the love and respect were what
held them together until Harry Jack, when he had a stroke, chose Manny
as his "nephew" to pour the water for him... 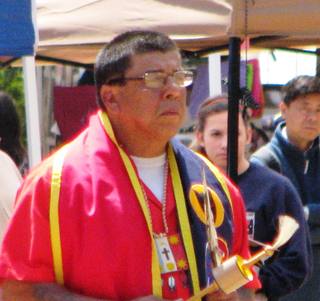 Manny
and I are in the same situation now. We are now "the elders" of our
respective families. One of the main issues that you cannot fail to miss
in Manny's book, is the need to consider and reconsider the treatment
of our older family members. As Lillian Vallee states, "his book is a
plea for the reintegration of elders into the fabric of our culture."
Now, Manny is is called upon to give the prayers, to
pour the water, to pray over a new-born... He does this while working as
a laborer and living with others as possible...
I believe The Elder must be placed on the shelves of many. The Sun From Longview Road is also in manuscript ready for publishing.

The Bridge is Gone was Manny's first book and is available at Back40 Publishing.Com
OrderThe Elder at:

You can use Paypal