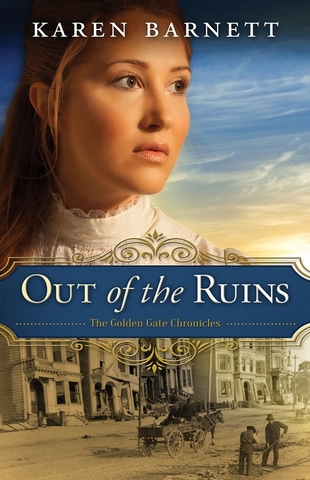 An Interview with Karen Barnett - Author of Out of the Ruins

Whether because of grief, guilt or a feeling of inadequacy, many of us find ourselves pushing God away during the time we need Him most. Abby Fischer, the heroine in Karen Barnett’s new novel, Out of the Ruins, comes face to face with grief and anger that causes her to question her faith, something the author herself has done for similar reasons.

Q: How do you decide the setting — both time period and location — for your stories? When and where are readers transported to in Out of the Ruins?

Out of the Ruins takes place during the San Francisco earthquake and fires of 1906. The inspiration for the novel struck when I was watching a documentary on American Experience about the earthquake. Survivors who had experienced the disaster as children were interviewed, and I remember thinking, “What must it have been like to walk the streets during such an epic event?” As I did more research, I became enchanted with this time period. Much like today, the early 20th century was a time when technology was changing faster than people could keep up. The future looked bright but probably a little frightening, as well.

He often answers my prayers differently than I expect. Just recently, I was working on the second novel in the Golden Gate Chronicles and started feeling overwhelmed and inadequate to tackle the difficult plot and theme I’d originally outlined. After stumbling around on my own for a couple of months, I finally turned it over to God and asked Him if He really thought I should be attempting this book. A few days later, my husband handed me an envelope. When I opened it, I nearly fell over. It was a $0.15 meal ticket from the Red Cross earthquake refugee camps, dated 1906. My brother-in-law had found it while going through some old family papers. As I held it in my hands, I felt God’s presence. It was as if He were saying, “Don’t worry. I was there for my people in 1906, and I’m here now. I’ll supply your needs.” 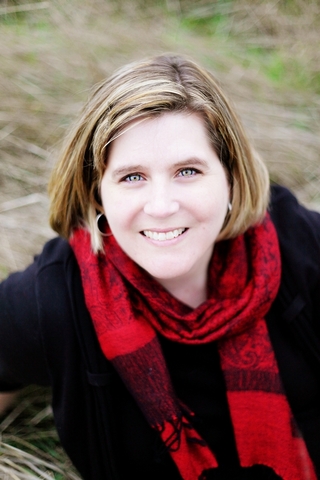 Q: In this novel, you explore the idea that even when we push Him away, God never leaves our side or stops loving us. How have you experienced this truth in your own life?

In Out of the Ruins, Abby pushes God away out of grief and anger. There was a time in my life where I pushed God away, but it was because of guilt rather than grief. I knew God would never approve of the choices I was making at the time, so I played Jonah and hid from Him, thinking I could return once I fixed all my problems. The result? I continued falling further into sin because I was incapable of changing myself. It took a time before I realized I needed God’s strength to overcome my weakness.

Q: Was there anything especially interesting or surprising you learned in your research for Out of the Ruins?

There is an incredible wealth of written information and images about the 1906 disaster. I loved reading people’s personal recollections, letters and journals. I found it particularly fascinating how after the initial earthquake, many San Franciscans breathed a sigh of relief, believing the event was over. They had no idea of the looming disaster to come — the flames that would consume a large swath of the city. Most sat down to breakfast, not understanding they might soon be fleeing for their lives. It reminded me of a horror movie. We watch a character step into a dark room, and we all scream “Nooooo!” because we know what’s coming. It also took me back to the events of September 11. I remember watching the news, horrified that an airplane had hit the tower in New York, but with no clue how much more was yet to come that day and all the days that followed. We often view history as a complete picture, but when you’re in the thick of it, you have no concept of the scope of events.

Q: Tell us a bit about your heroine, Abby Fischer. What will readers love about her, and how is she challenged throughout the course of this book?

When I wrote Abby’s story, I was determined to step away from the typical heroine mold of the confident and beautiful woman. Abby is shy, socially awkward and stubborn — like me. She envies her sister’s beauty and talents, while being completely blind to her own. She’s spent much of her life hiding in her sister Cecelia’s shadow, but when her sister becomes ill, Abby draws on a well of inner strength she never realized she possessed.