Paul Grzegorzek to release “The Follow” with Trestle Press

Paul Grzegorzek will be releasing the novel “The Follow” with Trestle Press. Here is the synopsis of the novel and Paul’s biography:

“The Follow is a crime novel set in Brighton on the south coast of England.  It's a beautiful, vibrant City, but also the drug death capital of the country and full of heroin and crack and the associated crime that goes with it.

The main Character, Gareth Bell, is a thirty-something police officer working on the intelligence unit, which doubles as narcotics, vice, auto theft and anything else juicy that comes along. 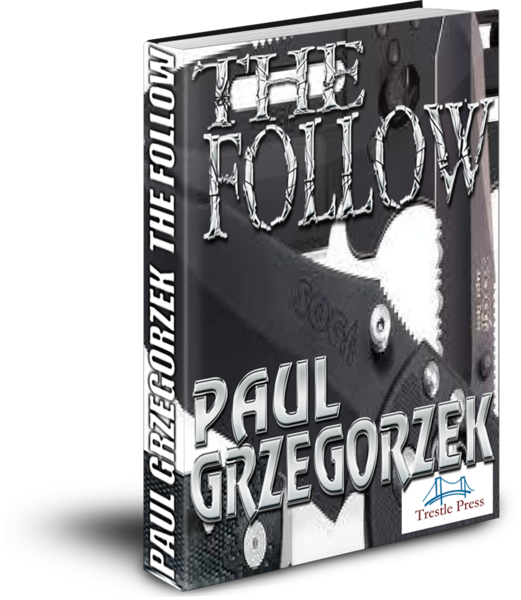 Gareth's partner, Jimmy, was almost killed when they took down a big-time local dealer, Quentin Davey.  Davey stabbed Jimmy in the chest and the beginning of the novel is the day of the court case where Gareth hopes to see Davey go down for what he's done.

Except that someone, somehow, has tampered with the evidence and the case is thrown out of court.  Unwilling to let it go, Gareth decides to take matters into his own hands and attacks two of Davey's dealers, taking their heroin and hiding with the theory that if he can make Davey go bust, the problem will be solved for him by Davey's suppliers.

The attack is far worse for the dealers than Gareth thought it would be, and he realises that as much as he might want to break the rules, he can't justify hurting people to achieve his aims.

Unfortunately, his actions have already set into motion a series of events which gets Jimmy kidnapped from the hospital, and Gareth must walk the fine line between doing what's right and not getting himself thrown in jail.

Gareth is arrested by PSD (internal affairs), and at first he thinks it's because of the attack but then he finds out it's because they think that he's the one who fiddled the evidence and got Davey off free.

Although he's not charged with anything, Davey begins to contact him to get the stolen drugs back and this contact is seen by PSD as further proof of Gareth's guilt.

The only ray of light in all of this is Sally, a civilian researcher who works with Gareth.  He finds himself being drawn into a relationship with her despite everything going on, and begins to fall head over heels.

Eventually Gareth manages to weave all the threads together so that they get a lead on Jimmy, and they discover that there is a mole in DIU working for Davey, but they don't know who it is.

Gareth finally discovers the mole's identity when one of the officers, Tate, attacks him when they find the house Jimmy is being held at.

There is a showdown between Tate, Davey and Gareth which culminates in Tate being shot and Davey escaping, only to head back to Brighton where one of his goons has taken Sally, Gareth's girlfriend, prisoner, so that Davey can take his revenge before he disappears.

Gareth chases him back to Brighton and catches him just before he can hurt Sally, but in the end has no choice but to kill Davey to save his own life, and Sally's as well.

Paul is 35 years old and despite the surname hails from Sussex where he has lived all his life.  He was born in Shoreham-by-Sea, within spitting distance of Brighton, a city he’s called home since the mid 90’s.

Over the last twelve years, Paul has worked as a soldier (part time only), a bouncer, a security officer and a police officer, not necessarily in that order.  In a 6 year police career, Paul worked on the beat (on a mountain bike of all things), on response, then on LST, specializing in riot duties and working as a riot medic.

Paul then went on to join DIU (the divisional intelligence unit) and worked on undercover drug operations as well as dealing with vehicle crime for the city and anything else that caught his eye.

During his police career Paul was twice given bravery awards in the form of divisional congratulations.

Paul eventually left the police for a high-profile security job in the US which fell through, leaving him working freelance security in the UK.

As well as doing this, Paul also works running a security team at a local hospital, and in-between all the work occasionally gets time to write.

While in the police, Paul met Peter James and soon the two became firm friends, Paul helping Peter as an advisor on his Roy Grace series on novels.

Outside of work and writing, Paul has studied white crane kungfu for about a dozen years on and off, and lives in Brighton which he loves and hates with a passion.  Wherever he goes in the city he is reminded of a job that he attended, a person he arrested or a crime scene he worked, which is why he writes about the place with such vigour and realism.