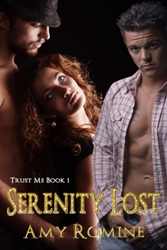 Blurb: Their brief heated meeting one fateful night had singed itself into their minds. Not knowing of the others identity, but unable to forget, had sealed their fate. The fire smoldered quietly in each of them as they tried to move on with their lives. Eric Stiles was in the middle of chaos, searching for a killer. Hunted by an obsessed psychopath Rebecca Gailen was trying to be strong. The world stopped for a moment as they looked up and saw the other standing just feet away. His heart lurched, her armor shattered and the world started again as Eric’s brother, Charlie, appeared to take her hand. Family loyalty isn’t a choice. When Rebecca’s stalker rages out of control, Eric’s decision haunts him and he struggles to stay away. Can he remain loyal to his brother, even if it means abandoning Rebecca when she may need him the most?

Amy Romine wrote a wonderful, beautiful story.
It's a fast paced, thriller, mixed with some romance, and a few sensuous love scenes.
Get me right, nothing to overheated here, it's very beautiful and clean, but if you like a steamy love scene and a great thriller story, then these books are for you. Amy Romine is a fantastic writer, she knows how to grip you to your seat and to keep you there until the end of the book, actually I’m still holding on till the third book, Jaded Promises which is due to come out in February 2011.
I cannot wait o read what happens next. I'm telling you I read the first 2 books in like 4 evenings. Just could not put the kindle down. By the way how do you love your Kindle?
I adore mine; I think it's easier to read on a Kindle then a book.

The plot of this story is absolutely great, her main, character Rebecca is gorgeous but she is also very strong, but as the story progresses her strength starts to fail, and that's when she starts to need Eric as the psychotic stalker toys with her more and more. Then her life will really be in danger.
Then she has to deal with Charlie, Eric's brother, the boyfriend she really doesn't love with whom she's been wanting to break off with way before she met Eric, and that will cause great havoc between the two brothers. Will she be strong enough to cope with this?
But then again she desperately needs Eric, more then she thinks, after seeing him again
Her heart is crying out for him.
Her sanity is slowly slipping from her, what will happen next?
Will the stalker get to her?

Available on Kindle and all eReaders