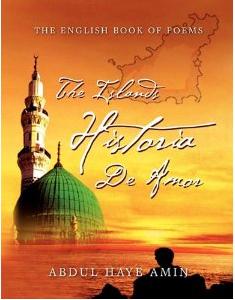 The Foreign Bilingual’s Author Abdul Haye Amin  announces the latest Revelation in Culture, Heritage, Historic, Politics’, Love, Romance, highly anticipated religion In Christianity  in the name of not  Church but medicine tablets ‘Seroxat’ to be taken Five times a days.

In the name of British tablets ‘Seroxat’-(Paroxetine), focus on the Cultural religion in Christianity, The book of poetry ‘The Islands Historia De Amor’ the Cultural symbol of not his or her but our medication in love given eternal views in language of poetry on how our patients struggle to over come the tablets ‘Seroxat’ and or the symptom most patients suffer indefinitely from.

…As mentioned under the ‘Seroxat’ (Paroxetine) for example;

“Obsessions are persistent and engrossing thoughts or ideas which cause a great deal of distress or worry. An example would be a person who has obsessions about contamination by germs or dirt. Compulsions are irresistible urges to carry out a certain act or ritual, such as excessive washing, which will often help to relieve the fear or worry created by the obsessional thought”—-(Tablet Seroxat leaflet information’s).

“O our people, hearken to the one who invites (You) to Allah, and believe in him: He will forgive you your faults, and deliver you from a Chastisement Grievous”—Holy Bible Quran: Sura: Al Ahaqaf: 46: 31).

The tablet ‘Seroxat’ as mentioned,–“Compulsions are irresistible urges to carry out a certain act or ritual” —
which encourage  and or invites to the path of almighty Lord the patients  invitation to ‘WORSHIP’ another word ‘RITUAL’ most westernized medical Board professional nor Authorities of the States official’s never encourage in their entire  duties of life to the members of public’s , “Allahu Akbar” ‘Worship’ Five Times a Days, other than encourage  illegitimate nature of ‘LGBT’ with N.H.S. free packets of condoms in our society where our Lord Jesus Christ forbidden  totally to anticipates in such Illegitimate  activity in Culture in Revelation.

Written book of Bangla poems, ‘Nil Dariar Prem’ and Bangla Song’s ‘Nistur Bandhu’ and finally in language English ‘The Islands Historia De Amor’ Unfortunately Due to unfortunate Foreign and Diplomatic circumstances, he chosen to retired from the catering industries in the Interest of British Employment Secretary of States,  catering Industries States [Salat] Law.

With Serving tablets ‘Seroxat’ without, ‘Fresh Green Salad?’-(Worship/Salat/Namaj), Good for the public’s health and environment safety Second to none favourites foods for the Vegetarian instead of  serving ‘Ritual’ [Matthew: 5: 17—21 & 13:13—18] most patients to recover from ‘Mental Health Illness’ and or diseases suffering long terms related symptoms in the States hospital alone?

Those who serving tablet ‘Seroxat’ to the Muilti-Cultural patients hope it will help patients and N.H.S. cost those who are known Christian lost in the street of Adultery, Drugs, infidel, Sex, Violence’s, Alcohol, Murders, Rapes, crimes, frauds, etc how to conduct themselves instead of  worship the almighty Lord in the nearest Church not only Sunday or ‘Friday national Jumma?’

Where Medical officials ‘seem to encourage the members of public’s and the patient’s invitation to free N.H.S. packet of condoms in our environment instead of encouragement to Worship in strict code of ‘Ritual’ conduct.

Medical Doctors refused to read small prints of tablets information contain ‘Ritual’ another words in Holy Bible and Quran ‘Medicines’. Thanks the ‘Seroxat’ tablet company, my Regards, Love, and Salam to you all from Holy Saint of ‘Sub-Continent of India’ for recognized the appointed Lord, “He-Sa-Ru-Hu-Lul-La-He” who was prosecuted in the eyes of the Justice, for telling us the truth, and for his beloved Father name, [ALLAH] Instructions in Seroxat tablets.

Other wise,  I wonder today what will I ever write book of poems where nation empty their own pockets to pay States visit to see  memory of  States (Protocol), love, ‘Taj Mahal’ After visit to the Holy Saint, Gharib Nawaz, Hazrot Khwaja Moinuddin Christy Sanjari Summa  Ajmiri, (R.A), in  India.

Xlibris Publication Company finally published world wide book of English poetry, “The Islands Historia De Amor” probably second to none bravest publisher after Hitler to publish ‘The Islands Historia De Amor’ which contain Lord Jesus Christ beloved Father name in the book of poetry and free from symptom of   ‘E. Coli’ Swine Flu, Breast cancers and Aid, free contamination diseases those who readers ever intent to hold copy of book of poems. Therefore, encourage any one those who wish to publish their book though Xlibris is the answer.

Is religious and Cultural investment of knowledge of trust invested is collection of poems as in history first man in India Christopher Columbus discovered ‘East India Company’ Instead of ‘Indian Gourmet’ in the Islands of Guernsey,  In the age of ‘LGBT’ Generation in our times.

In the poetry category and is available worldwide online and on book retailer websites such  as Amazon and Barnes & Nobles and elsewhere.

The New English book is a collection of poems of sundry themes. Poetry enthusiasts and book fanatics are in for a new poetic read as, “The Islands Historia De Amor” this book contains a number of poems that will amuse and entertain readers.