The Making of In the Land of Cotton by Martha A. Taylor 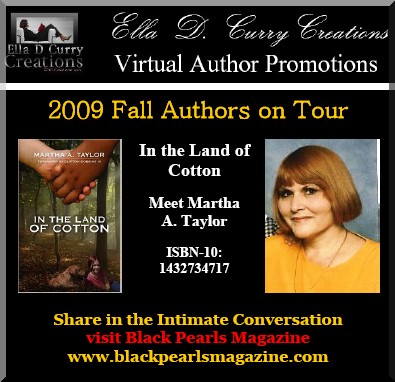 Hello Martha! It is such a pleasure to have you on The Black Authors Network author's tour. The Give the Gift of Knowledge tour is used to expand the variety of books that our readers receive each month. Your book is a welcomed edition. Tell us a little about you and your passion for writing.
MAT: I am a sixty year old grandmother of four. My writing career, until the last few years, has been one of those “don’t quit your day job arrangements”. I am a tax professional who discovered early on that my creative writing skills came in handy when writing client letters to the IRS. My passion for writing becomes evident in my books. It is a blessed opportunity to give birth to a character and watch them grow throughout the development of the story.

Introduce us to the story behind the book, In the Land of Cotton:
MAT: As a child growing up in Memphis I could not have known that the Boyd family, the main characters in In the Land of Cotton, would have such a haunting effect on me. Last fall, their indelible personas became overwhelming. They were all I could think about. I sat down one afternoon and the book began to flow to paper. I still had vivid memories of Cypress Grove, a primitive farm the Boyd family had lived on since the days of the Civil War. They had no electricity, no running water and certainly no refrigeration yet they wanted for nothing. It was a step back in time but, as a child, I wanted to be part of that. As the reader journeys through the 1960's, they travel along side the Boyd family as they experience the historic events of that decade. You will find as a reader that you will become immediately vested in the characters. The Boyd's have the voice for every Black American that lived through those turbulent times.

We would like to explore some of the Intimate moments in the book. Read on as Martha takes us inside.

Martha, in your own words, tell us why this book was meant to be written.
MAT: In the Land of Cotton is a provocative and emotional chronicle of a young, inquisitive white girl coming of age in the color divided South of the fifties and sixties. My story places you smack dab in the middle of the Civil Rights Movement. It’s a heart-felt journey through American history that weaves a tale of forbidden friendships, misconceptions and human nature… human nature at its best and worst.

After all of these years I suddenly became compelled to write the story of Silas and his family. I wanted this new generation to know that it hasn’t been that long since black families lived in seclusion with no electricity…no running water or sanitation…no telephones or refrigeration. My heart is always in my words as I define that sole-mates are forever and true love..really is colorblind. I wanted to remind the people of my generation of how long this journey has been; and to the younger generations, I wanted to present a time capsule of events so they would never forget the anguish, fear and tremendous sacrifices of their ancestors. In light of this year’s Presidential Election, In the Land of Cotton defines a beacon of hope for any individual, who has ever felt different or longed for more out of life.


Beside Lucy, the part-time maid for the family, what made you so drawn to the woods?
MAT: It was the “not knowing”. It was the excitement of going somewhere no white person had ever been. It was the wanting to belong to something bigger than myself.

(Snippet From Cotton) Not smoke like the woods was on fire but smoke like came out of a fireplace; soft, mesmerizing smoke that called you to come explore the woods, smoke that carried your imagination and made promises of a different life, far far away from the one you were living.

When did you know you were in love with Silas your childhood friend?
MAT: One evening after Silas walked me back to the “white neighborhood.” We were always terrified someone would see us. It would have been tragic. Silas, who was an African American male, could have been killed but, we always took the chance.

(Snippet From Cotton) I stood there holding my bike like some anchor that tethered me to the ground I was standing on. I watched Silas until he completely disappeared into the woods then waited a few more minutes after that, in case he returned.

At the peek of the Civil Rights Movement when did you realize there still remained tension between the North and the South?
MAT: When martial law became the order of the day. When southern Governors stood chained to university doorways. When buses were bombed and almost daily we heard about some southern Black school that had been burned.

(Snippet From Cotton) Martial law was declared in the South. Robert Kennedy, the Attorney General got involved and once again, Walter Cronkite had a television camera in every nook and cranny, capturing every slur and clubbing. For days he regurgitated the entire travesty right into our living rooms. The majority of country was enraged but here in the south, it was just another day in Dixie.

Did Silas share your feelings and deep emotional bond?
MAT: Silas always appreciated the unspoken line in the sand. Inter-racial marriages were against the law in most states and prejudice ran high. “The Dream” was spoken of often by everyone; trouble was it was totally out of everyone’s reach and we all knew it.

(Snippet From Cotton) We finished our picnic with small talk about his daily routine and the friends he’d met. Even Silas used color as a first descriptor. We were a long way from Martin Luther King’s dream. We were certainly a long way from mine.

Was there a sense that time was short for you and the Boyds? Did you feel complete racial equality would ever be realized?
MAT: The country had come so far in such a short period of time I knew we had reached the point of no return. Civil Rights and racial equality were marching through the streets of the South. At the same time, I felt it would be generations before racial equality would become the way of life.

(Snippet From Cotton) I thought about what Lucy had said about poverty being generational. I thought the advancement of civil rights would most probably be generational also. I thought that the Wallace’s (Governor of Alabama) of the world would eventually die off and each generation that followed would be raised to be less prejudice. I thought surely at some point all the seedlings that had been planted would eventually grow into strong trees and under their branches we would all live in harmony. I hoped that would be in Silas and my lifetime.

Thank you Martha for sharing with us! How may the readers contact you?

Martha A. Taylor, Author, "In the Land of Cotton"
Email: Taylortsg@Aol.com