THE SACRED ROTA, PIERS ANTHONY AND THE LAW OF ATTRACTION

WHAT DO PIERS ANTHONY, THE SACRED ROTA AND THE LAW OF ATTRACTION HAVE IN COMMON?

In an interview with John Demartini, from THE SECRET, John said that the biggest impediment to using the LAW OF ATTRACTION, is that we give over our power to what we perceive is a "higher moral authority." This moral authority is the CHURCH and all of its dogma. You know: you are not worthy of happiness; your are all sinners; the poor shall inherit the earth; life is meant to be one of pain and suffering unless you follow our dogma.

Well, I beg to differ. Both Brian Doe and I expose a lot of this dogma in the first two books of the WAKING GOD TRILOGY: BOOK I THE JOURNEY BEGINS and now THE SACRED ROTA: BOOK II, which has just been released by LITERARY ROAD PRESS! (http://literaryroad.com/)

WAKING GOD BOOK II: THE SACRED ROTA opens doors that many would prefer stay closed. Continuing with the fast paced action of Book I, humanity is beset with growing problems reminiscent of the ancient Biblical plagues. The battle between the Archangel Michael and Mantrella (a.k.a. Lucifer) intensifies as conception of the Old Testament’s Adam becomes a certainty. The rise to power of the UN’s David Dajjal, a puppet of Michael’s, sets the stage for world domination by the Bilderberg Group. New information is revealed about the Tarot Code, the blueprint for man’s future spiritual and physical evolution, and the role of the church’s Sacred Rota in the epic conspiracy to keep humanity in ignorance and ancient institutions in power. Will the hidden god seed in our DNA be activated with Adam’s birth or will secret powers maintain their domination of our destiny?

It is within the first two books of the trilogy that religion is exposed for the demon that it is. We see the LAW OF ATTRACTION at work, but for others, not for you. Why can't you manifest your heart's desires? Perhaps it is because you have given control of your life over to those who seek to dominate and control under the guise of promises of life everlasting.

“I read Waking God II The Sacred Rota, by Brian L Doe and Philip F Harris. This is a sequel to Waking God, published in 2006, or really a continuation of a three part story. It is a science fantasy theological thriller, odd as that combination may seem to be. The final battle is developing, and while they do argue theology, there are also people getting killed wholesale as the several themes slowly integrate. I am agnostic, with no belief in the supernatural, but as before, I found portions of the discussion more interesting than the action. Here's when Lucifer harangues an Archangel: “You create demons and false hopes of redemption. You build them mighty temples and give with one hand and slaughter with the other. You have kept them separate and ignorant and give just enough to raise empty hopes. You destroy their prophets and burn their seers. If they question, you put them to the rack and crush all semblance of free thought. You give them a doctrine of poverty and offer riches in your fantasy heaven. Kill in the name of god and your treasure shall be immeasurable. You divide them and thus conquer them, and tell them they have no responsibility but to be good sheep and to follow your demented dictates.” This strikes me as an apt description of global religion. I was intrigued by the Tarot discussion, because I did some research there, thirty years ago, when writing Tarot and devising my own 100 card Animation Tarot deck, because the established decks are clearly incomplete. I conjecture that one author in this collaboration knows how to write, and the other knows his occult lore, because they clearly have done their Tarot homework. So this is a novel worth reading, but it will help to have an open mind. I fault it for developing serious characters who may then be thrown away, or suddenly having new significant characters for whom there was no prior reference. (But it turned out I had forgotten that one of those was in the prior novel. That will be clarified in the published edition of this one.) So I think it needs better overall organization, but there is nevertheless much here that you probably won't find in the tacitly expurgated traditional press.” PIERS ANTHONY

If you are totally happy and all of your life desires are manifest, do not read this book! But, if you are lacking fulfillment and are seeking to gain control over your life, THE SACRED ROTA is an eye opener. 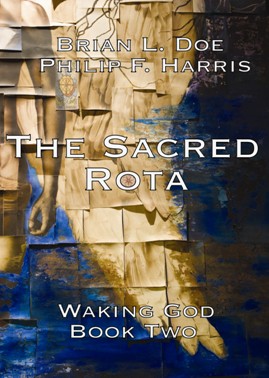