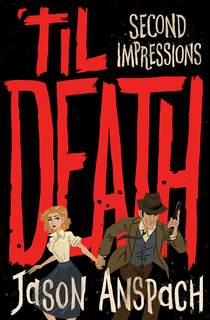 'Till Death:  Second Impressions - Review by Martha A. Cheves

Frank Rockwell, Sam's deceased father, had made his way down as a Return - ghost - from the Pearly Gates Administration Building in order to see his wife Alice one last time.  He was given clearance by claiming to hold plans for an atomic super weapon that jeopardized the world if discovered by the Soviet Union.  Though he told Sam the plans were legitimate, they weren't where he promised they could be found, and Sam took the ordeal as another of his father's "jokes."

Sam, who runs S. Rockwell, Private Investigator - Returns and the Unexplainable Welcomed was about to say something to his mother when a deafening BOOM violated the air.  He was flung forward and could feel a brief but intense heat at his back as he fell.  His mother Alice was knocked backward and landed on her bottom inside the house as shattered glass and debris rained down on the driveway and lawn.  His father's Cadillac lay twisted and flaming, like a burned carcus of a blown out Panzer tank.

So, was the possibility of the plans for real or is there someone out that that simply believes they are?  Find out as you follow Sam, with the help of his fiance Amelia and a certain angel named Eamon track down a rouge Return and defend America against a Soviet Agent.

I've read Book 1 in this series 'till Death and found it to be amusing and humorous at times.  It was full of twists and turns.  I couldn't see how Book 2 could get any better.  I was wrong.  This book has grown into slight humor, more suspense and murder, more 'Returns', and more enjoyment.  Now I can't wait to red Book #3 'til Death: The Man Who Balked.