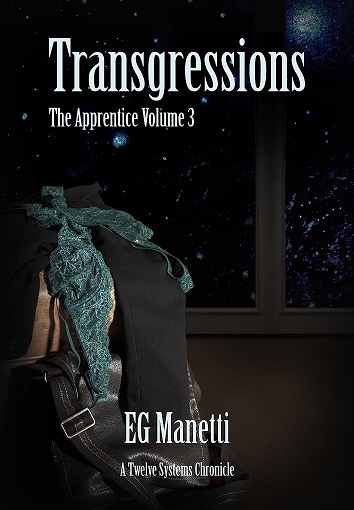 Transgressions: The Apprentice Volume 3 is available at the special release price of $2.99 (regular price: $4.99)

Life within the Serengeti Cartel is perilous, riddled with malice and intrigue that can threaten the mightiest of warriors. For Lilian – brilliant, despised and one misstep away from execution for her father’s crimes – all that stands between her and destruction is the powerful warrior Lucius Mercio. In return for his protection, Lilian became Lucius' apprentice, yielding control of her body, will, and intellect. The desperate gamble has paid off. In defiance of all expectation, Lilian has survived nearly a third of her trial by ordeal, but it is far from over.

Determined to raise Serengeti to the pinnacle of power in the Twelve Systems, Lucius has ruthlessly exploited Lilian’s brilliance to achieve his ambitions. Within seasons, he will lead Serengeti to new heights with the launch of Bright Star, the first stellar exploration venture in over two centuries. With each new success, Lucius’ rivals multiply while a traitor stalks the halls of Serengeti, determined to thwart Lucius by any means. As the viciousness of her enemies escalates, Lilian is forced to confront the past and choose between betraying her oath of loyalty to Lucius and protecting the deadly secrets of her father's dark acts.