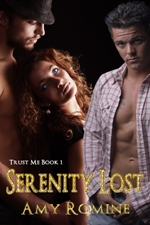 book. Serenity is sexy, fun, tense and twisting. I had a hard time putting it
down.” - Cass (reader)


His fingertips grazed over the delicate twists framing her face. Her eyes fluttered closed and a powerful need overwhelmed him. His hand wrapped around her waist to land on the small of her back. He pulled her against him, feeling the gentle rise of her chest as she took a slow breath. He focused on her eyes as they opened, and he lowered his mouth to brush a hesitant kiss over her breathtaking lips.

The touch was soft and lingering. She moved her lips against his in a tender caress that made his heart flutter. Unable to ignore the softness of her lips, he savored every touch. His fingertips swept her cheek as he kissed her long and slow. The water in her hands dropped to the floor with a soft thud. She wrapped her arms around his shoulders and his hand tangled itself within the curled tendrils of her
beautiful hair.


The delicate scent of her body filled him, stirred the rolling heat within his stomach and a groan sat at the bottom of his throat. He ached for her skin as his hands shifted beneath her shirt. His fingers danced over the silk of her lower back. Her soft body crashed against him. Her grazing hands inched down his back, across his abdomen and up to his chest, sending spikes of electricity into his groin.


Their once hesitant, tender embrace became deep, insistent and brimmed with mutual passion. One hand in her hair, the other encircling her waist and he walked her back, trapping her against the wall. His hunger for her seemed unquenchable as he devoured her lips and explored the recesses of her mouth with his tongue.


His heated body pressed against hers as their lips parted, gasping for air. He traced his tongue down the line of her neck. He stopped, suckling on her collarbone. His fingers lingered on the area of satin between the dip of her waist and the curve of her hip. They played for a moment before moving upward, across her ribs. She attacked his ear with a purr. He lifted his eyes, the reflection of his own breathless passion shone within her depths of blue.


“Where’s your room?” she managed to ask as he tugged at her lips in distraction.


“I have no idea,” he said with a grin. She cocked her head to the side before her hands dove into his pockets. Searching for his key, her fingers brushed against him.


Unable to turn away from her dazzling eyes, a smile edged his mouth as she teased him. When she finished, she drew him against her by the pocket of his jeans.


“I think I found it,” she said as her breath teased his lips.


She triumphantly lifted the key between them.


Content just to have her in his arms, he realized he didn’t care about the room or the world around them. Overwhelmed by the new sensation of serenity, his thumb traced the line of her cheek. He leaned down, once again coaxing her lips against his. Her arms slid around his neck as she brought him closer. He fell into the candy of her mouth.


Voices descended the hall and she whimpered in irritation at the interruption. He groaned with the broken embrace as he took her hand to search for his room. She laughed at his obvious
desperation.


An unnerving ache replaced the serenity in the absence of her warmth. As soon as he found the room, he swept her back into his arms and pressed her against the door. He reclaimed her lips as his own, in case she’d forgotten. His hands slid around her hips before he lifted her, and she wrapped her legs around his waist.


He carried her into the room. His attention still focused on her lips as the door closed somewhere off in the distance. Her legs locked around his waist as she pushed his leather jacket off his shoulders and he shrugged it away. The edge of the bed bumped against his leg. He lifted his knee as he turned and leaned forward, laying her down beneath him.


Their lips parted as he eased against her, their bodies meeting through the barrier of cloth. His fingers traced the edge of her hair. He gazed into her eyes, making sure they both knew where this was going. She seemed to sense his hesitation and answered it with a sunlit smile and a grind of her hips that erased any of his doubts.


He’d never wanted someone so much in his entire life…