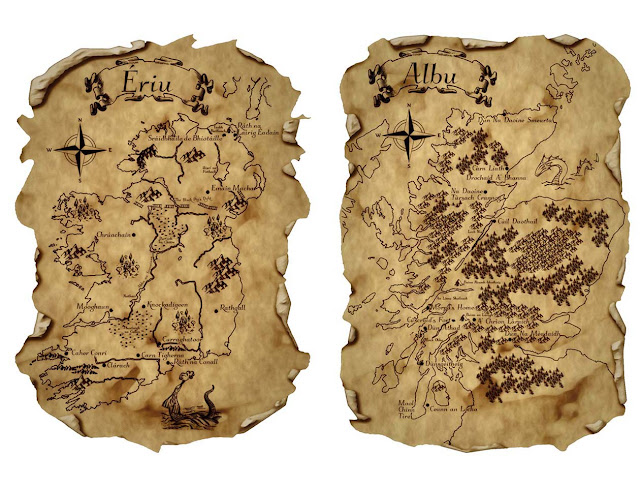 I really find creating maps for books a fun change of pace. These two maps are for David H Millar's CONALL book series, being published through A Wee Publishing Company.
~
For this pair of illos, I had to reference really old maps of both Scotland and Ireland. What I found most challenging was how almost every map I could find was significantly different from every other map I found. So a lot of wingin' it was going on, lol.
~
Of course, I'm sure you've noticed the names above differ from the names you may know. Eriu is Ireland and Albu is Scotland.
~
*Correction*  The name “Albu” actually refers to the island of Britain which includes Scotland. Couldn’t find an Ancient name for Scotland!! Plus Conall will be making his way down Albu in Conall III.
~
Like so many other languages, there were regional variations of Gaelic. Irish-Gaelic and Scots-Gaelic. Sometimes so varying in spelling and pronunciation, there were often difficulties understanding each other. (I'm not this smart, lol. David told me.)
~
Speaking of Gaelic, did I ever tell ya'll my first name is Gaelic. Now that I know there is a difference, Aidana is Scots-Gaelic. I was named after the 6th-century fire God and Goddess (a combination of the two diety's names) Aidan and Edonna, even though my heritage is Spanish Gypsy with some French, Mexican, German, and Cherokee mixed in for good measure, lol. I have an eclectic background.
~
However, out of curiosity, I looked up my name in Irish-Gaelic, and it has a slightly different meaning ... Little Fiery One. I think
~
I like that :D Follow David Millar on Twitter and check out A Wee Publishing Company on Twitter, too.