You Shall be Known by Your Fruit 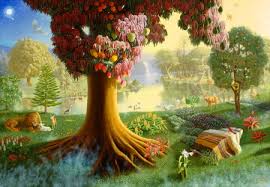 There are a lot of fruit themes in history.  Genesis begins with a garden setting and the command: “You may eat of the fruit of any tree in the garden except the fruit of the tree of knowledge of good and evil.”  Not even attempting to dissect the motivations of why God would make a tree that He summarily tells His people to shun – I still have the opportunity to glean something from the whole fruit imagery.  Jesus refers to the same theme when he says in effect:  “Good fruit shall come from a good tree and bad fruit from a bad tree – you shall be know by your fruit.”  Other than avoiding the proverbial apple – where does this leave us?

Well, this actually is one one the most profoundly solid pieces of advice that God ever gave us. We live in a world where we have lost our moral compass to the point that it is very hard to discern what is good and what is evil.  By “good” I mean something that leads us toward a relationship with God and a healthy interaction with others.  By “bad”, I mean something that separates us from God and breaks our relationships with others and even with our very selves.

In order to picture this more clearly, I am going to use Neb as a character from the 3rd book of The Deliverance Trilogy, Neb the Great, who thought he had his life centered on what really mattered – personal success, while he broke from every known opportunity for grace in his life.  First of all, because of the way he was raised by his mother – a woman who yearned for power – he sincerely believed that the world revolved around him.  He had no sense of perspective.  He remained in infancy in his understanding of the world. Second of all, he saw everyone around him as either a threat or a potential challenge to his authority, thus he could not embrace any kind of mutual relationship with a natural give and take.  For Neb, it was all about him taking what others must give.  And third, Neb dabbled in the “universal unclaimed powers” which he believed he could harness for his own use. Though in many ways, Neb was an interesting and complex individual who had great potential – still, he was eating all the wrong kind of fruit – thus his life and death bore testimony to his choices.

These are the same kind of struggles which Adam and Eve had to face and which we still have to face today.  These are the apples that leave a bitter taste in our mouths. When we focus on ourselves so much that we lose perspective on what is happening to people around us, we generally fail to do the good that we are capable of doing and we even demand what is unjust.  How many times have we complained about poor food or service when our brothers and sisters may not have any food and no service?  When we look upon the world as merely a threat to our happiness or our status – how open are we to engaging in helpful enterprises which may benefit society as a whole? How often do we spread malicious gossip?  How often do we knock others down in the hope that we will rise higher? Finally, when God does not answer our prayers as we thought He should, how often do we go to knocking on the wrong doors looking to make our dreams come true?  There is a “universal power” out there we can pray to – but it is notunclaimed and though it may give you what you want for a day – it isn’t known for fair dealing…as Neb discovered a little too late.

For further information about Neb the Great – see: http://www.akfrailey.com/neb-the-great-shadows-of-the-past/ and check out the Amazon page: http://amzn.to/1p2Z0Go