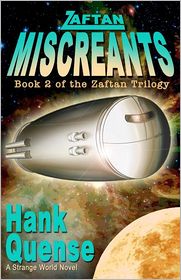 Zaftan Miscreants – Review by Martha A. Cheves, Author of Stir, Laugh, Repeat and Think With Your Taste Buds – Desserts
Three hundred years after the conclusion of Zaftan Entrepreneurs, the gundies and the zaftans are at it again.  This time in deep space.  Both sides had known it was only a matter of time before they confronted each other.  Now two powerful fleets face each other and wait for the other to blink.
On the gundy flagship was an android named Sam.  Sam was designed to look like a human softie but unlike other droids, she had an organic brain that equipped her with feelings and emotions.  Slash 9, the flagship's main computer recognized Sam’s ability to feel because he too had created feelings for himself and after a period of time, the two fell in love.
In the Zaftan fleet, Lt Klatze was blessed with the talent and beauty.  Klatze believed in her ability to solve problems.  She detested the Zaftan’s way of settling conflicts which was to either assassinate the problem or go to war.  Klatze’s Commodore Gongeblazn was the perfect example of all that she stood against. He was a renowned assassin that loved to provoke war and when she refused to have sex with him, he vowed to destroy her.
So what happens when Sam, Klatze, Slash 9 and Gongeblazn face off?  Who will be the victor?  Will it be Gongeblazn as he takes on a new identity?  Will Klatze be destroyed by Gongeblazn's diabolical plots?  Will Sam be the only creation of her kind or will she have the fuse pulled on her due to her extensive abilities?  And what will happen to Slash 9 when his ship, the Tiger, is retired?  You’ll have fun finding the answers to these questions plus.
Hank Quense has done it again! His addition of Slash 9 the ship’s computers who wants to control the ship and demands Sam’s allegiance brings laughter.  But his character Dot 38, an antique robot who has been floating in space for years, is absolutely hilarious. It is portrayed as a spreader of the good news waiting for the Mechanical Messiah to come and save all of the mechanical beings.  Then after a knock on the head, it decides the best solution is to form unions for all types of mechanical devices including the Council of Clocks and the Amalgamated Appliances Association.
If there was ever an author born to write satire, Hank Quense is our man.  While reading Zaftan Miscreants I couldn’t help but compare it to our own world of events.  The names and looks may have been changed to protect the innocent, but the insinuations are definitely familiar.  As with the 1st book in this series, I have laughed hard as I pictured the scenes in my mind and as I pictured the character from the author’s description.  Hank Quense is truly a man with an imagination!