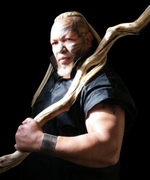 Ahura Z has been a telepath all his life. He has always been able to see and understand things others could not, (though as a child he thought everyone could see what he saw!). As a young man Ahura received 6 years of intensive training under a great teacher who taught him to focus his gifts and enhance them. In addition to a wide array of metaphysical disciplines, he also trained extensively in martial arts, dance, and the visual arts.

His predilection for strength and authority coupled with his natural telepathic ability led to a focus in protection and self-defense, both physical and metaphysical. He discovered that he had a natural ability not only for seeing, but being able to eradicate harmful entities and negative energy from people’s homes, which he refers to as Psychic Policework (also known as exorcism). He developed an organization called the Unicorn Rangers Psychic Police Department through which he rids people’s homes of dangerous entities, remove curses and teaches people to keep themselves and their loved ones safe. He trains students with similar inclinations in Psychic Policework to assist him.

After years of teaching throughout the United States he realized his dream by opening his own school, where he now teaches full-time. Through Unicorn Cove School of Metaphysics he offers classes in a wide array of disciplines. Though the school is currently located in Westbrook, Maine, Ahura conducts private video classes online using Skype for non-local and international students. He also answers metaphysical and paranormal questions from people all over the world via his website Ask the Unicorn and his new live web TV show Ask the Unicorn LIVE.

RSVP for Interview with Ahura Z Diliiza to add comments!