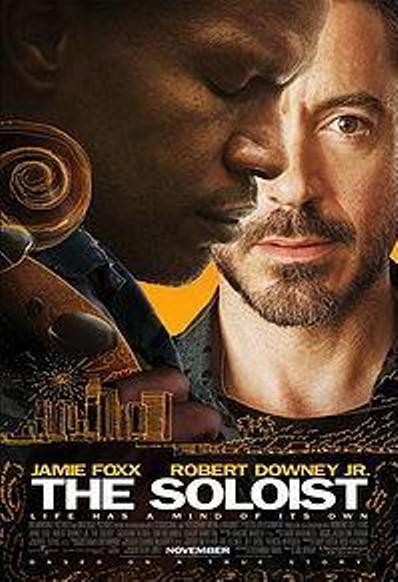 I wanted to see an adult film this weekend. Not an x-rated adult sex film, but a thoughtful adult oriented film, for you know---- grown ups. So I skipped the premiere of the X-man film and I decided to take in The Soloist with Robert Downey, Jr and Jaime Foxx. (I know, I know, I usually go see the obvious blockbuster and report on that; usually that is more interesting). I have been taking classes towards my MBA, and I missed the premiere during finals the last two weeks. (Financial Accounting final, a real nightmare that we’ll talk about another time; god, I hate math or concepts that have to do with anything mathematical). One other thing. As a reviewer, even as a blogger, I don’t usually read other reviews before I see a film. I want my mind to be “tabla rosé”, or totally blank; not in the sense that it usually is, but in the sense that I don’t want to form a pre-opinion about the film before I see it. I broke that rule before seeing this film as well. Some of the other reviews were well….. half way, half hearted and slightly disappointing. I am happy to report to you that I liked this film, despite the efforts to poison my mind against it; I wanted a grown up film, written, directed and played out for grown ups. What I mean by this is that the film did not have the predictable happy ending; Nathaniel Ayers, (the Foxx character) did not end up playing his cello at Carnegie Hall in New York, triumphing over his mental impairments; Steve Lopez (the Downey character) helping the handicapped man, and writing the Pulitzer Prize winning book. If you are expecting the typical Hollywood ending, go see the film and be amazed.

No, this film is not the classic Hollywood cures mental illness stick; this film probes the modern relationship between reporter and prodigy with more of a realistic, gritty, (for lack of a better word) messy result.

Steve Lopez is a divorced reporter who writes feature, human interest stories for the Los Angeles Times. The movie turns on a scene in the Times offices where it is disclosed that the newspaper is not being read as much by young people as the online version and hard news stories are not carrying the circulation at this time. The newspaper sells papers not on the day late news story that you get online or on your cable, but on the human interest stories that Lopez writes. Lopez was in a bicycle accident and afterwards meets Nathaniel Ayers, a street person who plays a 2 stringed violin. Lopez becomes interested in his story when he verifies that Nathaniel was indeed a child prodigy from Cleveland who attended Julliard for a time, and has an usual attachment to all music Beethoven. Homeless and on the streets of LA, Nathaniel seems to be at peace with playing his beautiful classical music with his 2 stringed violin to the open air, the traffic under his part of the freeway bridge, and the pigeons. Shopping cart in hand, Nathaniel roams the city streets, cleaning and playing.

Lopez, the great writer that he is smells a story and pursues it. His columns about Nathaniel leads one his readers to send a cello that she can no longer use. Ayres accepts the cello with some difficulty because there are strings attached; he must report to a homeless shelter to keep the cello and play for the residents. This takes as Ayres does report to the shelter, plays for the other residents and eventually, reluctantly accepts an apartment there. Nathaniel and Steve form a friendship in this process. Steve very strongly feels that if he can push Nathaniel in the right direction, get him medical/psychiatric help and medication, perhaps Nathaniel can resume a promising career as a professional cello player. Not that Steve is without need for some help himself; his life patterns follow a non-commitment trial where he was not able to commit to his ex-wife and child. (Ironically, in the film, Catherine Keener plays Lopez's ex-wife and also his editor at the Los Angeles Times). Steve nonetheless continues to push Nathaniel, taking him to a philharmonic rehearsal as the Walt Disney Center in Los Angeles, arranging for cello lessons from an expert, and coaxing Nathaniel into an aborted concert attempt. Lopez even manages to locate Nathaniel’s sister in an attempt to have someone manage his affairs. The pain and frustration in this film of trying to improve Nathaniel’s situation is well represented in the film.

But the big ticket item, psychiatric and medical treatment, perhaps a cure for the schizophrenic delusions and voices Nathaniel hears in his head eludes Lopez. As the counselor at the centers tries to explain to Lopez, maybe Nathaniel is not ready for help; maybe he does not want to be helped; maybe help has failed him before. Maybe Nathaniel is content with his situation. Maybe Lopez will just have to wait until Nathaniel indicates he wants to analyzed and medicated of his own free will.
Despite clearing the way for the mayor to help that area of center with a multi-million dollar commitment and winning both an award for his writing about Nathaniel and a book deal, Lopez is determined to get Nathaniel treatment and medicated. When he presents Nathaniel with commitment papers, it backfires and Nathaniel throws him out of the apartment, threatening his life.

This is where the true lesson of the story becomes apparent; Lopez has learned as much from the plight of Nathaniel about what it means to commit to another person as a true friend as Nathaniel has benefitted from his generosity. Following through on his friendship, he does bring the sister to LA to reunite with Nathaniel, this time with no strings attached. That is the real message of this film; friendship can overshadow all ills. True friendship is more important than manipulating our friends, it means listening to them and sometimes allowing them to exercise their freedom of choice, even if it seems to you not to be the best thing for them at the time.

This is a very good picture. It is poignant and touching, urban and gritty, and at times scary and eye opening into the plight of the more than 90,000 homeless people in Los Angeles. Robert Downey Jr gives a steely-eyed performance of the excellent writer who has his own issues in life outside of his work (the raccoon storyline of this piece is a reoccurring theme for human fatality we all suffer from). Jamie Foxx totally sells the homeless musician-prodigy suffering from delusions. I think the best performance in the picture was given by Catherine Keener. Her scenes are perfect, and she has the ex-wife, still in love with her man, but unable to live with him down to a science. If the film has a weakness it is in the direction. Nonetheless, I got what I paid for. This is an adult film about grown up people, with grown up themes. The plot did not settle for the flashy Hollywood ending. Some of the scenes taken in the LA ghetto are frightening and the plight of the homeless comes through screen in an earthshaking way. Disturbing and edgy, the film does a very, very good job of bringing home the plight of the poor and the difficulty in treatment when medical science either has failed them before or the patient does not trust them. The plight of the homeless is portrayed emphatically, without being patronizing or overly moralistic.

This film moved me. I enjoyed the picture. I was pleasantly surprised that the ending was not sappy. This is a grown ups film. Because of it’s portrayal of the homeless and it’s true to life exposition, this film deserves to be supported. It is a compelling, interesting film; a breath of fresh air and a disturbing revelation.