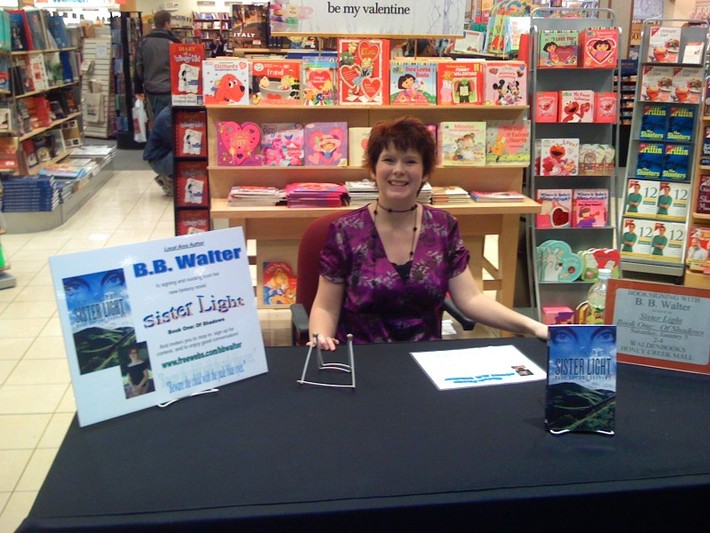 Something About Me and My Book:
I'm married. My husband and I have no children, unless you count our two dogs. I work full-time, but enjoy writing in my spare time either before or after work. I've been writing since I was a kid; it started with poetry and just sort of evolved over time and as more skill was learned.
My book is a fantasy novel. It is the first book in a triology entitled: Of Shadows. The first books name is: Sister Light. It's basically about a kingdom that is invaded by a neighboring culture bent on destruction. A girl, Rose, in the novel is the primary character but not the total focus of the story. Rose is believed by many to be the child born of a prophesy. This prophesy declares her the destructor of the world, in a nut shell. Rose is unique because she's born with an ability in this world. She can summon lightning and use it to either heal or kill. Unfortunately for her, magic is forbidden in this world. Rose is just trying to survive, torn between risking her life by using her magic to save her kingdom and just wanting a normal life.
It's an epic adventure that takes one from galloping horses to savage creatures to tender acts of sacrifice.
I hope everyone enjoys the story as much as I enjoyed writing it.

A woman leaned over a black cloth spread across the surface of the stone table. The bronzed flesh of her hands sparkled in the shimmering light as she caressed the flat, gray stone of her worktable. Her young face was a rich, soft hazelnut that sparkled with the light from the cloth. Black, curling tattoos – completely tribal in fashion and design – ringed the woman’s left eye and snaked across her temple to cover her ear, finally trailing down the left side of her neck, feeding into the neckline of her silken tunic.

White, straight hair, cut short just under the woman’s chin, shook as if stirred by a gentle breeze. Her eyes sparkled of their own accord, needing no extra luminance from the inky black cloth. Her eyes were deep pools of rich color almost as black as the cloth that lay stretched before her on the stone table. Long, white lashes curled and framed her eyes, throwing shadows on her finely arched cheekbones. A straight, but somewhat wide, nose trickled down to two lips as pink and soft as rose petals.

“The Gates offered in this Coil remain closed to their kind, but an event shall foresee the wrenching of the Gates between the Coils.” The woman’s voice rang strong as her ancient words filled the air, but she spoke with a thick accent that slurred some words while hissing others.

A second set of hands appeared on the other side of the table, framing with the woman’s hands around the black cloth. A man’s hands.

“Tell me what you see of the event.” His accent was slightly different from the woman’s.

“Watch for the child with the pale blue eyes,” she whispered her voice soft but rushed and hissing.

Hello Billie. My name is Fernando Sobenes and I want to invite you to read the prologue and the first two chapters of my novel: "The Evil Visitor" in my blog The Evil Visitor

If you get a chance, please visit my blog to read my special feature called The Author’s Corner. . http://www.kathleengage.blogspot.com

Colleen Breuning said…
Hi there Billie! Thanks so much for the friendship. I checked out your website, it is awesome. Your bio is just delightful. I read the book excerpt and you sure have a real talent for writing. My goal is to someday write a novel. Right now, I'm focusing on my poetry, 2 books in the works. One is a collaborative effort. I look forward to chatting with you. Take care!

Thank you for the comment. Yes, almost anyone can get published these days--at least self-published if you pay for it. Whether you go the traditional route as I have with my 60 plus books or self-publish, the rubber really meets the road when you attract readers--and begin to sell books. That's what will really count in everyone's book--the professionals and the customers. I've got a lot of information about selling books on my blog. I'd encourage you to search for the word "pyromarketing" or "marketing" and read those entries. Hope it helps you.

Patrice-Anne Rutledge said…
Hi Billie -- thanks for your comment on my page. Good luck on your books -- they sound interesting.

It's good to see you here too. I also hope everything is going well with your book. Btw, what flower is that in your photo?

Jo Fulkerson said…
Your listing on the Members page has Mattoon as your hometown. Would that be Mattoon, Illinois? I grew up in Salem before moving out here several years ago. I still have vamily in Breese.