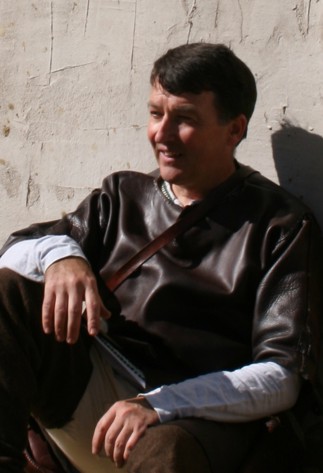 Book reviews and their importance for marketing
17 Replies

David Burrows has not received any gifts yet

Something About Me and My Book:
David Burrows was raised in Lancashire and educated at Arnold School, Blackpool. He went to Liverpool University where he obtained his degree and PhD before moving to Edinburgh, where he spent many a happy weekend on a mountain top, freezing in ice and snow! He has now moved south, to a much gentler climate in Kent where he has taken up the sword, shield and spear of an Anglo-Saxon re-enactor, in Regia Anglorum. Writing is his main hobby and he has written a fantasy trilogy The Prophecy of the Kings, which comprises Legacy of the Eldric, Dragon Rider and Shadow of the Demon - sample chapters and reviews can be found on my website at http://prophecyofthekings.com/. He is currently working on the prequel to the trilogy, Drachar’s Demons and a children’s bed time story book, Grump the Giant.

David's interest in fantasy started with The Lord of the Rings. Motivated by the epic tale he put pen to paper, determined to create a story with bold characters and an intriguing plot. The book's initial scene was a betrayal set deep in the heart of a mountain. Encouraged by friends, he started writing The Prophecy of the Kings in the months during his wife’s pregnancy with the first of two sons. As with most aspiring authors, writing was part time, with the plot progressing in the evenings and holidays. At times the tale seemed to naturally take the characters into extreme peril, and for months David was left wondering as to their fate. Refusing to rewrite the tale to rescue them he patiently waited before inspiration struck and the story continued at a fast pace to the next cliff-hanger. Suffice to say his sons have now grown and, as the quill dries, are of an age to read and appreciate this work. As to the characters in the tale, they too have grown older and wiser; as to whether they survived the tale, only reading the novel will tell.

When Tallin’s crown once more does shine,
Drachar’s shade will rise sublime,
Three Princes Royal through time will sleep,
An appointment with destiny three kings to keep,
Trosgarth’s arm across the land will reach,
Of war and famine his army will preach,
And one will stand to oppose his throne,
A king resurrected from within his mountain home,
Of air, fire and water he will be born,
To aid the people when all else is forlorn

“Ashona”” Chanathan wailed, shaking her shoulders, “Ashona!” he sobbed.
The light in her eyes dimmed. She was too close to her shaol, her guardian spirit, and that had always worried Chanathan.
“Ashona,” he cried.
Slowly she shook herself as though waking from a dream. “Thank the Kalanth!” Chanathan sighed, grinning broadly.
Chanathan helped Ashona to her feet. By their side a soldier made a warding sign against evil, his mouth agape. Chanathan turned to him, “Forget what you just heard. Do not mention it to anyone.” He doubted he would; when she had spoken Chanathan, too, had felt the compulsion in her tone. The man stared back blankly, angering Chanathan.
“All of you!” Chanathan commanded. “Forget what happened, under pain of death.”
Ashona looked at him bewildered. “Why? What has happened?”
Chanathan looked at her, truly glad she was back. “Nothing. We have won a great battle and darkness has been banished from the world.”
Taking her hand he guided her from the forest, towards hope and an uncertain future.
Behind them the three soldiers remained, but for a while only. Sensing the evil of the departed soul they took to their heels, seeking the company of the living, eager to tell the tale of what they had just heard.

free fantasy book give away

I'm giving 15 copies of my book, The Prophecy of the Kings trilogy, away on Goodreads.com for anyone who is a member. If you are not - sign up.

The web address is http://www.goodreads.com/giveaway?all_countries=true


Have a look at some ofthe reviews on http://www.librarything.com/work/6600779/reviews
My website for sample… Continue

David Burrows said…
Thanks and very much appreciated.

John Kremer said…
Welcome to the Book Marketing Network. I hope you have a great time meeting other people, blogging, sharing videos, posting to forums, and forming some great relationships.