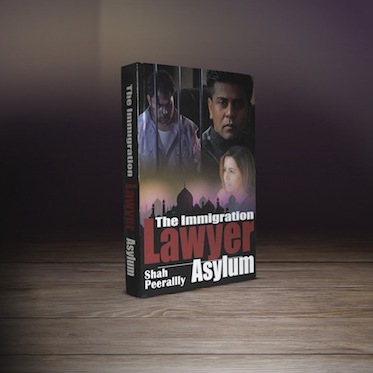 Looking to translate my book - The Immigration Lawyer Asylum

Anybody can help on a book translation to Spanish and Arabic?The story is centered on the immigration lawyer, Sarah, who handles a case as the book describes the entire immigration process to obtain…Continue

Looking for genuine reviewers group - readers who really want to share the passion of readiong.

Hi I am willing to review a book every month and review it. In return I would like to have the same from your side. Please let us know.…Continue

Immigration Attorney has not received any gifts yet

Something About Me and My Book:
My name is Shah Peerally and I am an immigration lawyer in California. I am also an a talk AM radio host, author and a movie producer writing and talking about immigration issues. My latest book is called 'The Immigration Lawyer Asylum'

This work of fiction covers the journey of Ahmad, a man fleeing Iraq during the rule of Saddam Hussein, to seek refuge in the United States. He is escaping because the Iraqi government has been torturing him for years thinking he is a CIA agent. Ironically, he faces an interesting ordeal in the hands of the United States Immigration. The US government, on the other hand, believes that he is a terrorist. While he is entering California on valid visitor B1/B2 visa, he is apprehended on immigration charges and placed in immigration custody. At this point, a new nightmare starts .

Signed up for BookDaily but don't know if it helpful.

Readers Favorite gives a 5 Stars to the book - The Immigration Lawyer Asylum.

The Immigration Lawyer by Shah Peerally details the travails of an immigrant, Ahmad. His home country, Iraq, treats him like a traitor as he is under suspicion for being an American spy. He seeks asylum in the United…

A Legal Fiction on the Plight of Immigrants after 9/11

Shah Peerally's book, "The Immigration Lawyer: Asylum" is basically a work of fiction that narrates the story of Ahmad who flees Iraq from the clutches of the Iraqi Government and seeks refuge in the US, but ends up finding himself stuck up in a similar situation. It is a story based during the reign of Saddam Hussein, where Ahmed is wrongly suspected by the Iraqi Government of being a CIA agent and is tortured relentlessly. He manages to escape to the US, but while entering California on a…