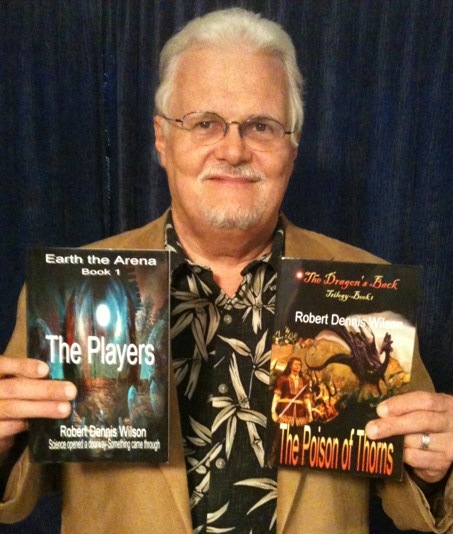 Robert Dennis Wilson has not received any gifts yet

Something About Me and My Book:
SF/F Author. Two novels in print and as e-books, with a third hopefully out in December 2010.

"THE POISON OF THORNS: The Dragon's Back Book 1" [Epic Fantasy] 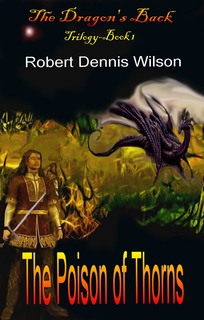 The Dragonsback Trilogy is a tale about frustrated vengeance and the poison that fills the lives of all who gather and hold dear the toxic thorns of bitterness. The story of two young brothers unfolds ten years after they are orphaned under tragic and mysterious circumstances. To deal with their continual unresolved pain they each choose separate paths and then come to believe that their sibling is in mortal danger because of his chosen path. Both boys find themselves in a strange world surrounded with many questions and it becomes their individual quests to find the answers.

Why were they locked away in an out-of-the way orphanage for ten long years, when they had living kin who would gladly have claimed them? Who are the sinister black-robed “Dragonmen” and what is their hidden agenda. And why are these blackrobes so interested in the two teenaged brothers that they would mobilize all of their considerable resources to possess them?

What is the significance of the shape of their isolated continent? Is it true that it appears to be a gigantic Dragon floating above the endless depths? Is there any truth to the rumors that man-sized, almost invisible dragons are stalking their nights?

And finally, who are the mysterious followers of the mythical Gryphon? Why do they alone, of all the diverse peoples of Dragonsback, have the ability to swim in the dark bottomless waters that surround their land? And most importantly, is the mysterious Swimmer who took part in the deaths of the boy’s parents still available… for retribution? 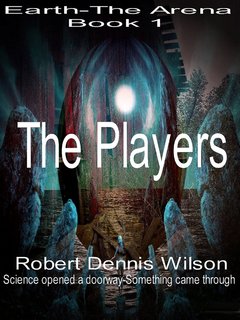 SCIENCE OPENED A DOORWAY -
SOMETHING CAME THROUGH!

Professor Horace Thompson and his team have just successfully completed a world-changing experiment in the newly legitimized science of Parapsychology. Using electronic devices that boost the weak telepathic signals of the human mind, they successfully communicated thoughts over a distance of fifty-six miles.

Suddenly and unexpectedly their world changes even more. Their experiment opens up a crack between dimensions and the form of a huge god-like alien temporarily materializes in front of them. Before he disappears, this apparently peaceful being informs them that his advanced race, the “Teachers”, desires to not only once again assist mankind, as they have in the ancient past, but to also support them against their common interdimensional enemy.

Like a surfer launched forward on the cutting edge of a tsunami, the proven intuitive and ESP abilities of graduate student, David Andrizzo, drive him on a wild ride into the eyes and hearts of the public. He is propelled into a leading role in research in the science of Parapsychology. He willingly tumbles into the arms and psyche of a beautiful like-powered woman. His destiny also thrusts him, with much hesitation, into the trusted position of liaison between humanity and the alien race of the Teachers, who remain locked behind a mysterious dimensional barrier.

What does it all mean? Two ancient and diametrically opposed alien civilizations have for millennia chosen the planet Earth to be the ideological arena where they confront each other. One side champions Law and a society based on unchanging Absolutes; the other promotes Liberty, License, and Free Choice. Throughout the ages of Man, we, like unsuspecting pieces on a chess board, have been chosen to be the PLAYERS in their deadly game. Wars, disasters, plagues, and even the rise and fall of human cultures have all felt the effects of the hidden manipulations of these super-human forces. But a change is taking place, one which will force every inhabitant of Earth to choose active membership in one side or the other. The alien Overlords are suddenly moving out of the shadows and our planet is about to become the devastated battleground - the Arena - where they will openly face each other in final and ultimate conflict. And God help the human who gets in their way or who chooses the wrong side!

Hello Robert. My name is Fernando Sobenes and I want to invite you to read the prologue and the first two chapters of my novel: "The Evil Visitor" in my blog The Evil Visitor

Karen Gammons said…
Welcome Dennis :) Just wanted to wish you good luck with your book you have coming out and invite you to visit my page for a look around. I also wanted to share my book trailer with you. Have a nice day.
Karen Gammons