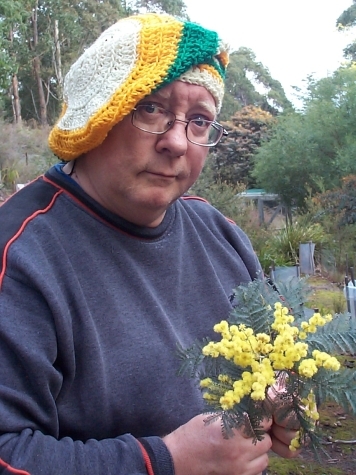 Tango Wayne has not received any gifts yet

Something About Me and My Book:
I'm a gay, retired research chemist. To date, I've written 8 fantasy / adventure novels, all with gay themes, and am currently working on my ninth. My novels are humorous and very exciting!

All my books are available print-on-demand or by pdf-file download from Lulu.com. Prices range from US$12-15 for paperback, or US$4-5 for immediate download. Extensive previews are available on my website (see link above).

The Swayer of Sankara

Seventeen-year-old David is exploring the island in the middle of the lake on his parents’ property, when he finds a strange, tomb-like building. The inscription over the doorway suggests there might be something rather nasty inside. What he discovers turns his normal little world upside-down. Find out what it is, and why David has to go to hell – with, as his mother puts it – a professional sodomist. [Teen 16+ gay themes]

The successful author of a series of fantasy novels, Cliff Face is advised by his agent that if he changes his name, sales will instantly cease. Struggling with the latest adventure in his ‘Pyramid’ universe, Cliff decides to take his dog for a walk one morning … and finds himself inside his own creation, where he is forced to deal with a very nasty monster … before it eats everything. (Warning! – this book has dragons in it.) [Gay themes]

David is nearly 16, the son of two scientists of the seeding-colony on Hope, orbiting Alpha-Centauri in the Centauri binary-star system. Life is hard; they have little technology except Fred, the ship’s computer, who controls the colonists’ lives in their secure, moated compound, together with his little sock-eating dusting-robots called ‘snufflers’. David has a tentative sexual encounter with his friend Peter, and is shocked when Peter later goes missing … [Teen 16+ gay themes]

The third youngest of four brothers, David is gay, but still firmly in the closet. He has no reason to come out until one day, the boys’ father receives a strange phone call - would the English family be prepared to give a young American state ward a holiday for two months? They are unsure whether to agree, particularly as the boy is apparently somewhat … disturbed. A little reluctantly, they eventually consent, but none of them is quite prepared for this guest! [Teen 16+ gay themes]

Eighteen year-old David rides home in the family car late one night. With his GP father driving, and mother and sister in the front, David is squashed in the back with his two older brothers, gazing out of the window. He sees something black on the road. They get the moaning package home, unwrap it, and find a very strange young man … What was the ancient legend all about, and exactly who was trying to kill Karl? This is a vampire story … with a difference. [Teen 16+ gay themes]

The comedic tale of a gay lad who has been dealt a cruel blow by nature, being seriously underendowed in the penis department. On the night of his sixteenth birthday, he makes a wish for someone, anyone, to do something! And that's when the demon appears ... [Teen gay themes]

David is just sixteen when he discovers that his eldest brother, Olivar, has murdered their sibling, Friedel, to ensure his undisputed accession to their father’s throne. David’s friend and mentor, the royal magician, gives him a magic ring and urges him to flee, before Olivar kills him as well. Reduced from prince to pauper, David takes to the forest, where he meets a very strange wolf. Can he release Geran from the evil curse, and at the same time, avenge himself upon his murderous brother? [Teen gay themes]

What would you do if you were gay, and on the evening of your seventeenth birthday party a beautiful, charming and spectacularly-endowed boy asked if you wanted to have sex with him? What David actually did was drop his punch all over Mum’s new carpet … and then spend much of the evening trying to avoid his very persistent … and increasingly strange gate-crashing suitor. No shoes or socks and apparently no possessions, as bold as brass … and then of course, there was his almost uncanny ability to appear and disappear at will … [Teen 16+ gay themes]