'Children Shouldn't Have to Live in Fear'

While gathering research for my book, "Who Killed Emmett Till?" I learned of numerous violent incidences in the Mississippi Delta,and I wondered what it would be like to raise children with such horror going on all around.…

A Will to Love is coming out in PRINT!

I am so excited! My short romance, A Will to Love is coming out as a print book from Red Rose Publishing. I got the word today! This book got a Reviewer's Choice nod from Midwest Book Reviews read it here : http://www.midwestbookreview.com/rbw/jul_09.htm#rc

I am too thrilled!

The past few days have been insane at best. As the date of release of Housekeeping for the Soul is getting closer, I'm working around the clock to get all my ducks in a row, and boy...that's a whole lot of ducks to line up!

Today I e-mailed many of you asking if you can forward a newsletter Dena and I have created. For some of you, however, I don't have e-mail addresses, so I will post the link here in hope that you can be kind enough to copy it and send it around to your… Continue

"if you think you can, then you can" Henry Ford

our capacity to understand tomorrow lies not in the past failures but in the future prospects. i dive therefore not in the dice of impossibilities but in the progressive bright future that lies ahead. am more optimistic about that future, more than I've ever been in my life. Let that hope and determination that you've built in you go into waste. Always remember that "if you think you can or cannot whatever you choose you are right" ford. We are therefore the product of our own… Continue

Create great relationships online. This audio features some great tips for marketing via the Internet.

The following audio teleseminar outlines some of the most important ways to begin creating online friends. Making friends online — that is creating relationships with key bloggers, ezine editors, website publishers, etc. — is the basis for all on-going success in marketing anything via the Internet.

Listen to the teleseminar here: http://www.InstantTeleseminar.com/?eventid=4982574

Please note that the… Continue 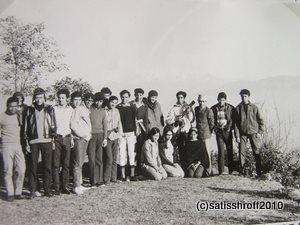 If you have not been by yet, stop over at Book and Author Event Center and see all the new content that's been added and promote your book for free!

When Opposites No Longer Attract

“The people who live in a golden age usually go around complaining how yellow everything looks.” ~ Randall Jarrell


Yesterday morning I received a call from a friend who’s traveling through Mississippi and stopped by a restaurant in Jackson. As she related her impressions of this restaurant and of the people working there, my friend was obviously quite impressed. As it turns out, this restaurant is part of a chain, even if one would never know it from the atmosphere it offers –… Continue I've been combing the internet looking for cool marketing ideas for selling my new book. Fun stuff. Man, some authors are so creative but I guess they learn from experience. I've done book signings before for my first novel "boy,crazy" and I did okay but I was such a novice. I think I'll be better prepared this time when I market "Millicent Carlisle". You know what's hilarious is the way people enter the bookstore and ignore you. They know you're there to sell your book and I guess its like… Continue

A veritable veteran of the literary industry, Kendra Norman-Bellamy is well-known inside and outside of books. Her latest novel, Fifteen Years, will endear her to the huge fan base from previous titles. Fifteen Years will gain new readers through its dealings with kidnap and the journey back to the family never known.

Who's next in the "5 Minutes, 5 Questions With..." series?
Kendra Norman-Bellamy, author of Fifteen Years…

Pauline R. Evans explores the depths of a marriage torn apart by affairs and mended by the Grace of God. With her debut novel, Winter's Kisses, she takes readers through a love unraveled.

Writing purely from the heart, Winter's Kisses is less about destructive lust and more about constructive love between husband and wife.

Who's next in the "5 Minutes, 5 Questions With..." series?
Pauline R. Evans, author of Winter's Kisses…

Proof is not the end of belief or faith, but the reward for faith. Faith can move mountains, or keep mountains from moving, so imagine what proof can do.

And I turned to see the voice that spake with me. His head and his hairs were white like wool, as white as snow; and his eyes were as a flame of fire. And he had in his right hand seven stars: and out of his mouth went a sharp two edged sword: and his countenance was as the sun shineth in his strength. Revelation 1, vs. 12-16
The snow came along with Spencer J. Atkinson, the man with the seven stars in the right hand. www.ProofFTLD.com, Year… Continue

The time is at hand to verify God's existence and his plan. God accomplishes such by placing and proving his soul in a man. The plan was designed to set your souls free. Many have been counting time since this world last saw me. Some knew I would return in about 2000 years and they would receive me, they knew God would prove to them who I would be. Now I'm back and I'm not what most were expecting to see, some might even want to nail me to another tree. For them I feel sorry, no, I'm not… Continue

It's Not Revolutionary, It's Revelationary!

He came unto his own and his own received him not, John 1, vs. 11.
This book is not about church or state, it's about matching evidence. It's not Revolutionary, as I have heard from some of the churches; it's Revelationary since it fulfills the scriptures!

Cice worked with me in London in our Nursery and schools in North London, then she went and helped set up our school in Sri Lanka she spent many years there, now she is in Kenya helping to do the
same there working alongside our friend Sammy. I thought you might like to see
her news letter as we work together there. Here she is...…

Nashville, TN, February 25, 2010—The team members at Writers in the Sky are pleased to share a series of interviews this month that confront the difficult issue of death from several perspectives and also to end the month with an interview that focuses on how to bring your own work to life. The month begins with an author… Continue

Join us for this exciting book tour. Alicia Morgan shares her new book with us, "Father and Daughter Time"

If you are looking for good advice on the world of writing - as a career -
and marketing your work, may I suggest the following FREE radio
interviews with advisors, publishers, agents, authors, free-lance
writers, poets, publication editors, as well as literacy and writer's
organization representatives, book reviewers and promotion experts at: