POD, Self Publishing & Independent Publishing Reviews Part 1 - 'Your Name's Not On The List'

I have noticed a particular rise over the past few months from readers of POD, Self Publishing & Independent Publishing asking me to review specific author service companies which they have not yet seen on the site. The array of author service companies is vast and I am slowly working my way through the ones I wish to include—meaning—there are already quite a number I have looked at but have decided not to review. There are many reasons why I… Continue

In life, certain things have a way of happening just at the right time. This week’s book publishing news was no exception. I have two quotes below from two senior principles from very diverse areas of the book publishing world, who in their own right believe they are making a difference. Here are the quotes. Follow the theme.

Quote One:
"We regard ourselves as independent in the sense of independence of third-party corporate ownership and feel at home with the other… Continue

Blackwell Espresso Book Machine For All Print On Demand Books

Blackwell booksellers will take ownership of the latest version of the Espresso Book Machine in April and showcase it at this year's London Book Fair on April 17th.

Blackwell, who sell academic books, will have the Espresso Book Machine in their Charing Cross store as part of a pilot test commencing on the last week in April. If successful, they plan to introduce machines to other Blackwell stores.

Independent book publisher Faber is one of one of those to watch for new trends and different approaches to publishing. On April 27th, they will release the ebook, ‘What Price Liberty?’ by Ben Wilson, inviting buyers to pay what they deem appropriate, even if that means the download is for free. The book itself deals with the historical attacks on civil liberties in Britain and how we need to carve a different kind of liberty for today’s modern… Continue

Kindle 2 Launched By Amazon - The way forward for the e-reader?

It seems the gathered publishing fraternity who turned up at the unveiling of Amazon’s new Kindle (Version 2) in the Morgan Library and Museum in New York city on Monday were more intrigued and quizzical, than necessarily bowled over by the new electronic edition to the Amazon family. Even host, Jeff Bezos, Amazon CEO, and author Stephen King---there to read his novella, Ur---did not cause any major earthquakes or even tremors.


I have not written too much here about ereaders,… Continue

This is an opening quote from an article about self publishing in the New York Times this week by Motoko Rich about the rise in self publishing. It is true, interesting and nice to see such a well established newspaper cast a cursory eye over an area of the publishing business which has long exploded… Continue

Some of you may remember reading on this site almost a year ago about the Espresso Book Machine (EBM). The machine is a printing press that will produce physical books in-store by means of print-on-demand technology. In effect, it is an on-demand book machine linked to an electronic database of published books. Here is the article we first commented on this in-store technology.… 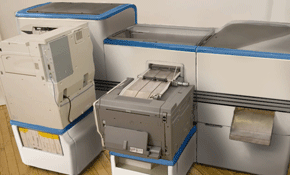 I mentioned in an article over Christmas that book retailers in Ireland had performed marginally better in 2008 than on previous profits for 2007. However, early figures suggest that the UK book retail trade recorded profits that were marginally down on last year. There is much discussion amongst UK retailers about the strategy of committing themselves to larger discounts for the buying public. The figures for 2008 seem to suggest that without these extenuated discounts, profits would have been… Continue

I thought I’d take the opportunity on the final day of 2008 to look back on some of the articles and subjects we have touched on during the year.

Overall, the Irish book retail sector has recorded stronger sales than for 2007, a surprise to me in light of the economic downturn and the continued reported news about retailers, publishers and distributors struggling in the final quarter of the year. While the industry may be finding the going rough, it seems the book buying public,… Continue

Some recent comments left on my blog over the past few weeks have prompted me to write this particular posting. It has made me examine more closely the reasons I set up the blogsite.

Let me begin by saying that I started this blog because I wanted to chronicle my own experience of having my next novel published through the medium of POD publishing. Naturally, I set out to research the whole area using reference books, libraries, internet writer forums and trade magazines. I last… Continue