I recently read about a dog-owner in London who was fined and
barred from driving for six months after taking his pet for a stroll while
sitting behind the wheel of his car. Prosecutors said the man was spotted
driving slowly along a country lane while holding his dog's leash through the
car window as the animal trotted alongside. The dog owner pleaded guilty to…

I saw a container of eggs in the grocery store marked "cage free eggs". My imagination ran wild with that one. I didn’t know eggs were raised in cages. I thought they spent a few hours with their mommy chicken and then were picked up and taken to be checked, washed, polished and packed in cartons with 11 or 17 of their little egg friends. Sort of like a styrofoam school bus and each egg off to a different destination. Eggs travel all over the world to be scrambled, fried, poached, baked,… Continue

An invitation only gala fundraiser hosted by long time Massachusetts Democrat giants Congressman Barney Frank and Senator John Kerry is planned for tomorrow night in Boston’s posh Ritz Carlton Hotel for senate candidate Martha Coakley.
Coakley is in a heated senate race to fill the seat of the late Ted Kennedy. The $2,500 a plate event is expect to inject desperately needed cash into Coakley’s fading campaign. Wealthy celebutards from all over the country are expected to… Continue

The Obama administration is very upset that radio superstar and conservative giant Rush Limbaugh took several days of headlines away from the president while they were vacation in the same state. It was leaked that Obama's people have initiated a poll to determine what medical emergency the president could claim for himself in order to regain the news headlines from Hawaii and elicit the most voter sympathy. Early reports are the medical conditions under consideration are; stubbed toe,… Continue

President Obama has asked N.Y. City officials and Mayor Bloomberg to reverse the direction of the ball drop and instead have the ball go up to usher in the new year. The president suggested the change as a "symbol of uplifting momentum for the economy". The mayor quickly agreed and said "All New Yorkers would be happy to assist in this important initiative to more our economy forward." The mayor was asked how many jobs would be created by changing the direction of the lighted ball, "Well, in… Continue

The 2010 New Year Baby said he will not sign on to take responsibility for 2010. The Baby was quoted “Are you nuts? I’m not getting involved with all the crap going on down there.” He said referring to Earth and the stream of bad news in 2009.
Traditionally the New Year Baby takes over the new year from previous year baby who, as 2009 Baby has aged very quickly, wears a long white beard and is in poor health. 2009 Baby said he will not continue into 2010. “If that punk thinks I’m workin’… Continue

The Night After Christmas

Twas the night after Christmas and all over the house
were the remnants of gift wrap and overstuffed mouths.
The dinner all done and the relatives left
just me and the Mrs. to deal with the mess.

The children out driving one party to the next,
and their friends all chatty while doing the text.
The Mrs. and I were planning some sleep
but unfinished cleaning, it just would not keep.

What to do with Global Warming blizzard in Northeast?

While watching the Global Warming Snow fall this morning; I was thinking about what we could be doing with this climate change defying snow that would help save our fragile planet. I offer two suggestion below and I’d like you to add some ideas. Let’s see what politically correct ideas we can come up with while we huddle inside, safe from the snow and eat our bread, eggs and milk that we bought last night. And don’t forget to be grateful for toilet paper. – John Bieber… Continue

When the Power Goes Off - John C. Bieber

The power went off at our house last Saturday night during the first snow of the season. We had 8 inches where we live. I like it when the power goes off. Unfortunately I have a furnace that has an electric blower, but a few dark quiet hours are always a welcome break. Like most people when the power goes, we light candles and just wait. In the summer months I often light a candle when a good line of thunderstorms rolls through secretly hoping for the lights to go out. It seems that the… Continue

My Friend - Mark A. Detri

On November 2nd of this year, my friend Mark Detri died suddenly, unexpectedly while on business in Ohio. His wife Lisa called us from their home in New Jersey a few hours after she was told. What do you say when you get the worst possible phone call?
Mark was like a brother to me. My wife met his wife at college in the early 80’s and we have loved him and his family for all these years. They were our best friends and our lives paralleled in many ways. Mark grew up in Stowe, PA and he and… Continue

Since I became a “Facebook” person a couple of months ago, I see hundreds more photos of people than I ever did before. You know the little picture in the person’s profile. Some people use a cartoon character or some logo they seem to have bonded with rather than their own face. A lot of folks use their pet’s picture. Why would you use your Schnauzer as your profile photo? Let your dog get his own Facebook page. And what are you supposed to say to the dogfaced guy if you ever meet him? “Hey you… Continue 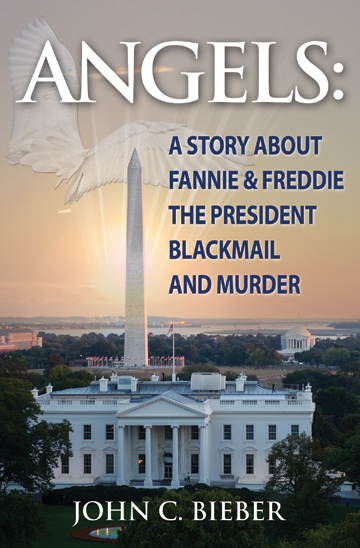 A Tax on Your Carbs - John C. Bieber

I read a few news stories recently reporting that during these challenging economic times, fast food consumption is up. Some might think that just the opposite would be true; that is until you are the hungry one and you only have three bucks in your pocket.

As one who discovered the value of the “dollar menu” at McDonald’s many years ago, I can testify to the inexpensive satisfaction that can be bought for three dollars and a trip through the drive through. I’d like to site a few… Continue

John C. Bieber author of "ANGELS: A Story of Fannie & Freddie, the President, Blackmail and Murder" at book signing in Reading, Pennsylvania Oct. 2009 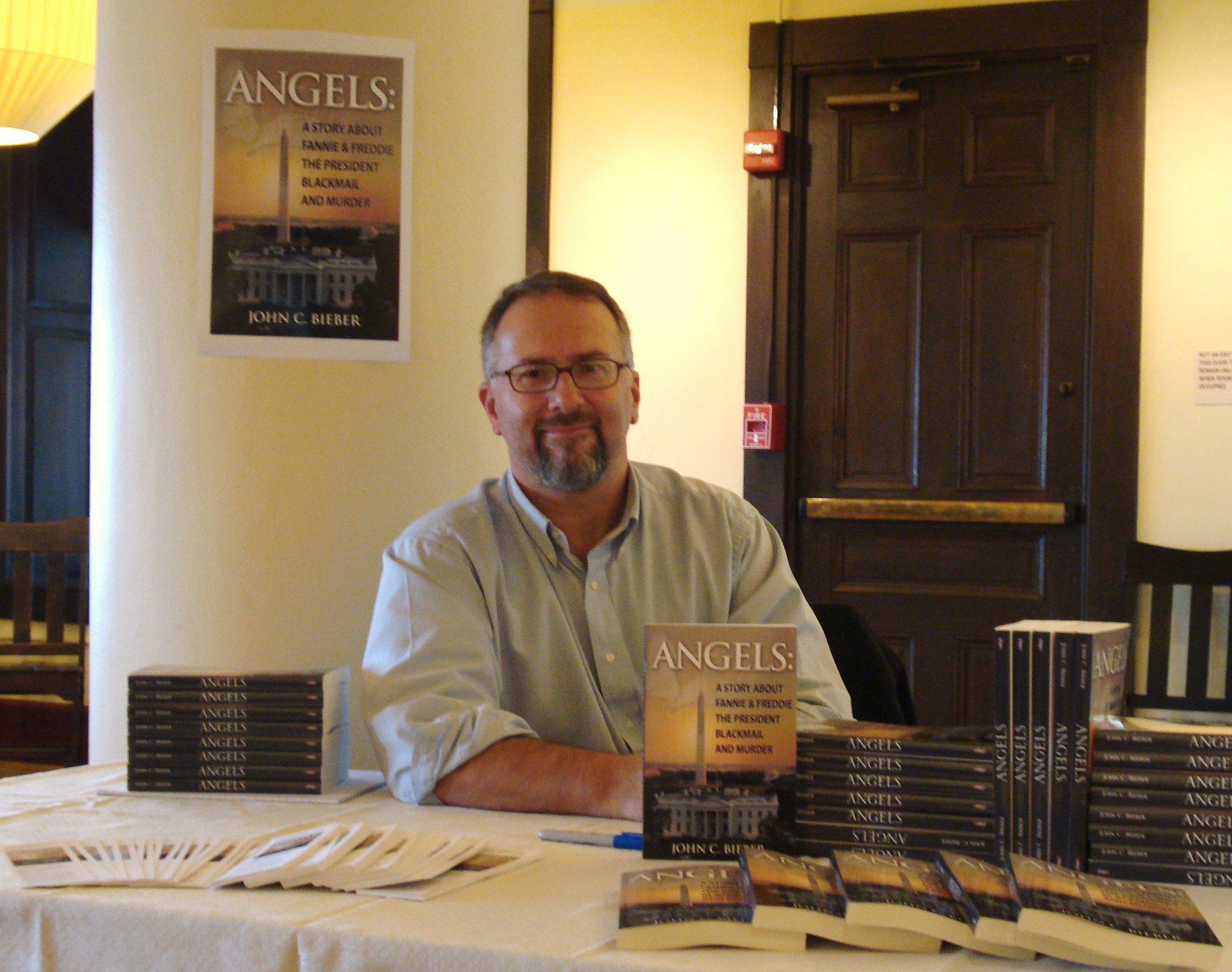 Review - "ANGELS: A Story of Fannie & Freddie, the President, Blackmail and Murder" by John C. Bieber

John C.Bieber does a masterful job of pulling you along in his first novel. It's a fast read, because you just can't put the book down.
The plot centers on Matt Davidson, a real estate investor with a business that is floundering because of the economy. He loves his wife, yet tries to shield her from his buisness problems. He does, however, let her in on his secret of seeing angels and demons at work in today's world. It has it all--romance, cold-blooded murder, plots to overthrow the… Continue

My feet are OK. The rest of me is getting old. As I approach my fiftieth birthday, I’m beginning to understand the really old guys who talk about nothing but their medications and when they last had a productive visit to the bathroom. I have determined that the warranty on the average human male body is good for 44 years. After that the wheels start flying off. Three of my tires are deflated and one wheel has no lug nuts.
It all started 4 years ago when I started wearing cheap reading… Continue 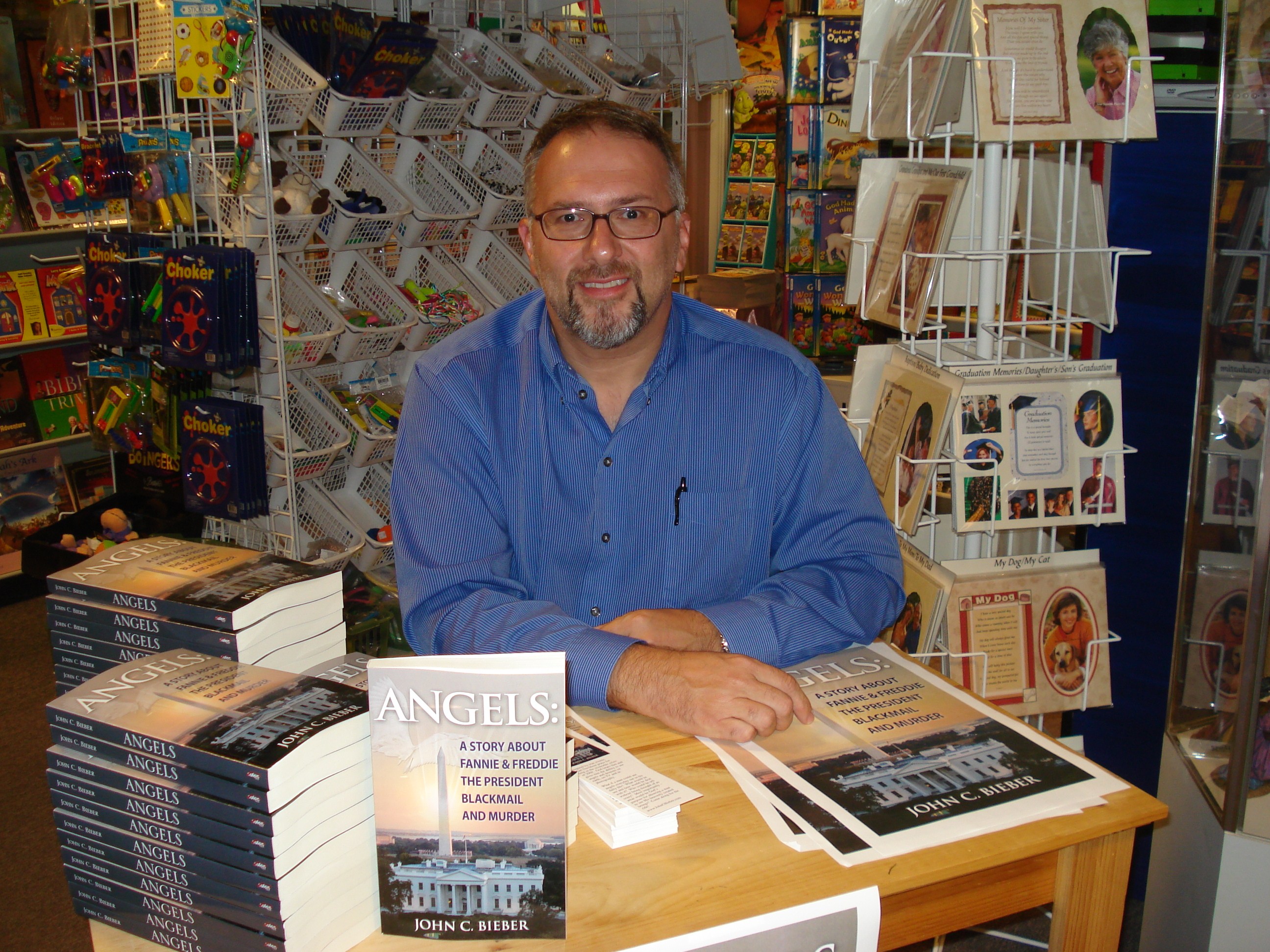 Now Available "Angels: A Story of Fannie & Freddie, the President, Blackmail and Murder"

Religion and Politics. Two things you're not supposed to talk about. Well, I like to talk and write about both. I call myself a conservative Christian. Who knows what that means to some people. Some might think I'm a crazy right-wing anti-abortion guy who clings to his gun and Bible. I do have a couple of each but I'm not crazy and I have some very liberal friends. They can tell you that I've never beat them over the head with my Christianity and I don't hunt. I have guns for personal and… Continue