In the novel Drowned Sorrow, water has become a supernatural element that can think, move and kill. Farfetched? Then discover these scary water facts and read how they tie in with the novel. There's also a free copy of the book up for grabs for one lucky reader - Creepy Facts About Water…

I just started collaborating with comic book artist Javi Salvago on AVALON, an online webcomic about my cat Avalon. From now on, new comics will appear bi-monthly.

Have a look at our first illustrations over at Characteristics of Turkish Van Cats and let me know what you think. And if you like it... spread the word ;-)

I'm giving away a box of Moonstruck Halloween chocolates and the supernatural thrillers Drowned Sorrow and The Strangers Outside as part of the Spooktacular Giveaway Hop. Contest is open worldwide and ends October 31. To enter, go to Halloween Truffles and Chilling Books

Love ghosts? Then I have also a second giveaway for you. Two winners will have the chance to…

Book Locations for The Strangers Outside

Westende is a quiet little town on the Belgian seaside, situated close to well-known cities such as Ostend and Bruges. It is also the town where my novella The Strangers Outside takes place. For those of you who are fan of the book, I thought I'd share a few pictures of this charming little town as well as of the holiday cabin that I describe in the story.

Be Jolly By Golly Christmas Blogfest

I’m participating in the Be Jolly By Golly Christmas Blogfest today. Have a look and find out about my favorite Christmas treats and those of all the other participants.

My cat Avalon has become quite popular since his appearance in the film adaptation of my book The Strangers Outside. After being a movie star, he has now also a weekly cat cartoon at http://avalon-lion.blogspot.com. His fun, lighthearted stories about life as a cat will delight readers young and old. “Garfield was a phenomenon in the seventies and eighties,” Avalon says. “I believe cat lovers are ready for the feline star of the new millennium…

I can see this as the next The Shining...

Suko's Notebook on DROWNED SORROW: "After reading only a few pages of Drowned Sorrow, I was…

My Trip to Bruges

I just spent three days in Bruges for the Razor Reel Fantastic Film Festival where I presented my latest horror book THE STRANGERS OUTSIDE and its film adaptation. Check out the photos at http://vanessa-morgan.blogspot.com/2010/11/razor-reel-fantastic-film-festival.html.… 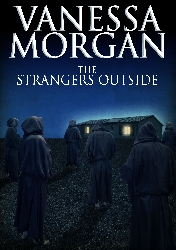 Sonya Clark Interviews Me About Drowned Sorrow and The Strangers Outside

Sonya Clark, author of the vampire novel Bring on the Night, interviews me for her website…

Giving Me The Creeps October Contest

Win one of my two supernatural thrillers in the Giving Me The Creeps October Contest at The Diary of a Bookworm.

First place will receive a copy of my novel Drowned Sorrow

, the story of a remote New England village where…

“A thirst-quenching blend of science-fiction with a twist of horror. The fear factor is accomplished not with blood and guts, but through what is not seen. Moonlight Creek provides the perfect setting to intrigue horror fans. It's isolated, mysteriously…

What are the best Halloween stories ever?

What are the best Halloween stories ever? A Dutch journalist asked himself that question and came up with stories from Stephen King, John Saul… and me :-) According to the article, my book Drowned Sorrow is one of the best stories to read on Halloween.

What do you think are…

Jack Everett Gives 5 Stars to The Strangers Outside

Jack Everett, author of the novel 1:1 Jihad-Britain, reviewed The Strangers Outside and gave it 5 stars.…

Kindle Obsessed Reviews The Strangers Outside

Kindle Obsessed has just reviewed THE STRANGERS OUTSIDE. Here’s a snippet: “There is an undeniable talent that shows through in Morgan’s work, and to that I say… bravo. If an author can manage to make…

Pitching Pencils Reviews Drowned Sorrow and The Strangers Outside

Pitching Pencils has just published an awesome review on both Drowned Sorrow and The Strangers Outside. Click here to read the entire article:…

Elena's Book Cafe's Review of The Strangers Outside

“This was a really great…

Tic Toc Reviews The Strangers Outside

"The Strangers Outside is packed with a large amount of punch. Truly a book that sends a chill up your back. If you enjoy spooky and creepy things you will enjoy this story. And better yet, it is currently being made into a movie. This would be a great book for reading around the fire with your friends. What could be better for the month of Halloween then to find a great new spooky tale to share?" - Blogcritics / Tic Toc