New Book Review By The Entertainment Critic: The Last Patriot 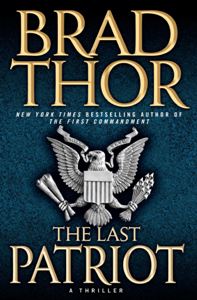 Brad Thor, a graduate of the University of Southern California and former member of the Department of Homeland Security's Analytic Red Cell Program, is the New York Times bestselling author of The Lions of Lucerne, Path of the Assassin, State of the Union, Blowback, and Takedown. He and his wife -- a physician to the Chicago Bulls and the Chicago White Sox -- divide their time with their two children between Chicago and the Greek island of Antiparos. Visit his website at www.bradthor.com.


“In 1972, workers in Yemen had made a startling discovery. Restoring the aging Great Mosque at Sana'a, said to have been one of the first architectural projects of Islam commissioned by the prophet Mohammed himself, the workers uncovered a hidden loft between the mosque's inner and outer roofs. Inside the loft was a mound of parchments and pages of Arabic texts that at some point had been secreted away, and were now melded together through centuries of exposure to rain and dampness. In archeological circles, such a discovery was referred to as a "paper grave."
Cursory examinations suggested that what the grave contained were tens of thousands of fragments from at least a thousand early parchment codices of the Koran.
Access to the full breadth of the find had never been allowed. Bits and pieces had been made available to a handful of scholars over the years, but out of respect for the sanctity of the documents, no one had ever been permitted to study the entire discovery. No one that is, until Dr. Marwan Khalifa.
Khalifa was one of the world's preeminent Koranic scholars and had spent the majority of his professional career building relationships with the Yemeni Antiquities Authority and politely petitioning it to allow him to review the find. Finally, there was a changing of the guard and the new president of the Antiquities Authority, a significantly younger and more progressive man, invited Khalifa to study the entirety of what the workers at Sana'a had uncovered.
It didn't take long for Khalifa to realize the magnitude of the find.”


Brad Thor’s new political suspense thriller, The Last Patriot, is an electrically charged book, with a topical premise that grips your attention. Scot Harvath, former Navy seal turned covert Homeland Security Operative is thrust into a mystery that is centuries old and as deadly as they come. There is a secret, a final and startling revelation spoken by Mohammed to only his closest companions. Within days he is assassinated. Thomas Jefferson (remember ‘the shores of Tripoli’ in the Marine hymn?) uses the secret to force the violent Muslim Pirates of the Barbary Coast to cease robbing US ships and forges a truce. Present day, men are dying as the secret apparently has surfaced again, this time in the form of notes that Jefferson took on the original manuscript of Don Quixote; a manuscript that is up for sale.

This secret is of such a nature, that once the world knows it, all of the radical, insurgent Muslim sects in the world would have to stand down, ceasing all revolutionary activity. But as desperate as the American government is to cease the secret, the insurgents are just a determined that the final revelation of Mohammed remain hidden forever. The modern day terrorists cannot abide the abrogation of all of the Qur'an's exhortations to violence and calls upon the adherents of Islam to be peaceful in word and deed. At the beginning of THE LAST PATRIOT, Harvath and his girlfriend Tracy are vacationing in Paris, France, when they witness a car bombing outside a café. Harvath is immediately thrust back into the life he thought he had left behind forever --- that of Special Operative for the President of the United States and defender of Homeland Security worldwide. The intended victim of the car bomb, saved by Harvath, is a college professor and scholar who is actually on a secret mission on behalf of U.S. President Rutledge. It involves the professor, Anthony Nichols, obtaining a first edition of DON QUIXOTE that was once owned by Jefferson.

Simultaneous to this action is an event on U.S. soil, in which a man named Andrew Salam is apprehended in a murder case in Washington, D.C. and taken in by the CIA for suspicion of terrorism. Salam, while being questioned by Aydin Ozbek, claims he was operating under direction of the FBI and had been specially recruited for a covert operation to track down members of certain Islamic organizations that threaten U.S. security. Ozbek and the CIA learn that Salam was duped and was never actually operating with the FBI. He was taken on by a former American operative, Matthew Dodd, who has since converted to Muslim and is working as a high-level assassin for some Islamic fanatics.

Dodd is also in pursuit of the same book that Nichols --- and now Harvath --- is after. The only difference is that Dodd has been commissioned by Islam to kill anyone who comes close to obtaining it. The text that replaced Mohammed's final revelation contains the most violent passages in the Koran. Allegedly, included in the original version were peaceful passages directly counter to what militant Muslims and Dodd believe to be true.

The pace moves fast and furious as all of the sub-plots converge in the race to find this ancient text. As stated by Nichols: “The mere suggestion that the Koran is incomplete runs absolutely counter to what every Muslim is taught. To accept the premise that the Koran is incomplete would mean accepting that it is not perfect.” This information provides the motivation of all the central characters and allows the reader to hang on every hair-raising turn that occurs along the way.

The book is a Dan Brown/Da Vinci code type thriller that is a genuine page turner. There is more tension in this book than many a political thriller. Heart-pounding and high voltage, this is a great book to end the summer with.