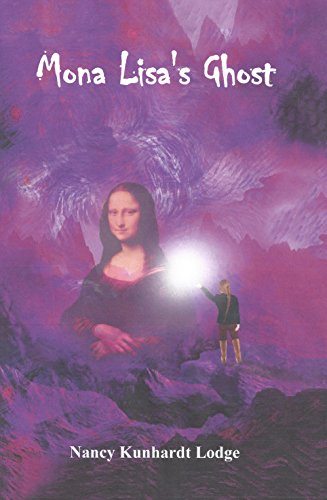 Following her first in the Lucy Nightingale adventure series and the sequel to The Crystal Navigator, art historian, Nancy Kunhardt Lodge with her Mona Lisa's Ghost takes readers on a thoroughly researched mesmerizing and magical journey incorporating a mix of art history, time-travel fantasy, communication across time, reincarnation, high tech devices, science, and the mystery of the tiny numbers and letters painted into the eyes of Leonardo da Vinci's 500-year-old Renaissance masterpiece, the Mona Lisa.

The story unfolds when the novel's two principal characters, Lucy Nightingale and her brainy friend, Sam Winter watch a video in their sixth grade class concerning the Mona Lisa. Apparently, the painting had been stolen from the Louvre Museum in Paris, France, and after several months of being subjected to scientific experiments was returned to its gallery in the museum.

What startled Lucy was the painting seemed to be exploding before her eyes with purple clouds swirling through the landscape, lightning ripping the sky, Lisa crying, and her eyeballs containing letters. It appeared as if something dreadful was happening to Mona Lisa's portrait and unfortunately no one noticed anything wrong about the painting other than Lucy and another student, Melissa Blackwood, who seemed as if she was electrocuted when witnessing the phenomenon that was taking place.

Lucy contacts her intellectually gifted friend Sam whom she knew would be able to figure out what was occurring. Sam concludes that it was a Zoom Seizure, a ghastly buzzing syndrome that zooms into things, seizes the molecules, and smashes them. Lucy and Sam believe it was an amazing anomaly, and SLARP, which is short for Sam and Lucy's Anomalies Research Project that was formed to investigate and explain weird happenings could solve the mystery.

While all of this is taking place, the children's substitute teacher, Miss. Lang had been reading a foreign book with a cover with gold letters stamped around a gold horse's head with the inscription, Folio MDXVL. According to Sam, this book had disappeared in 1517 and was a folio of a meeting of a Danish Konference of geniuses called the Laughing Horse's Mouth. It seems that the Konference recorded the happenings of the meetings conducted every year and these were incorporated into a large folio. Miss Lang happened to be in possession of the folio of 1516 that disappeared in 1517. Sam and Lucy are dumbfounded as to how Miss. Lang had acquired it, and what was more startling was that Miss Lang was also aware of what was happening to the Mona Lisa and thus was nodding to them that they were on the right track.

Upon further watching the video, a would-famous physicist, Dr. Euphemia appears who believes that da Vinci was able to see that which cannot be seen with the naked eye and that he had captured the heart and soul of a girl named Lisa Gherardini, the wife of a Florence merchant in his painting, the Mona Lisa.

Continuing their investigation, Sam travels to the island of Sklaw off the Danish coast to find out more about this secret society of geniuses and the lost folio of da Vinci's notes. He also invents a special instrument that he gives to Lucy called a Quetzal, which she is to take along with her to Paris while vacationing with her parents. The device looks like an iPhone, that had slides and switches along its edges, as well as a pearly screen, lenses and holes on the ends.

In Paris, while visiting the Louvre, Lucy bumps into her classmate Melissa who informs her that she is the reincarnation of Lisa Gherardini and that she has returned to life to reclaim the painting that Leonardo did not give to her husband, who had paid for it, which to the horror of Lucy, means that her friend is planning to steal it from the Louvre.

The tension and suspense continues to build up as readers travel through the streets of Paris and particularly the Catacombs, the underground ossuaries which hold the remains of millions of people located in a part of a tunnel network built to consolidate Paris's ancient stone mines.

This is a fascinating story for young and old with its wonderful narrative drive, splendid gallery of characters, rich descriptions, and vivid scenes, as well as material that is very familiar to Kunhardt Lodge who holds a PhD in Renaissance Art. Make no mistake about it, once again she has proven herself to be a masterful plotter and story teller who is marvellously inventive as she smoothly weaves the appreciation of art and art history into her yarn. And by the way, as she mentions in the Acknowledgements, she had consulted with her sixth grade beta readers at The River Valley Charter School who gave her invaluable editorial advice on dialogue and plot revision.